Weekend Round Up – Audi Motorsport Blog 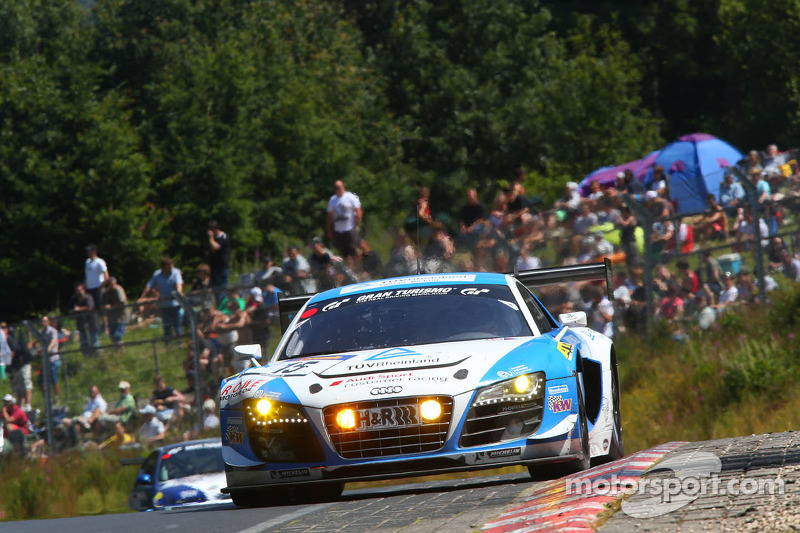 A look back at Audi's involvement in racing worldwide.

Round five of the VLN was held at the Nurburgring this weekend. A total of nine Audis were at the event. Two Audi R8 LMS ultra cars were entered from Phoenix Racing and Twin Busch Motorsport. Unfortunately only one R8 LMS ultra competed, following a technical problem on the Twin Busch car. The Phoenix Racing R8 LMS ultra finished fourth. The Raeder Motorsport TT RS won the SP3T class and it was also an Audi 1-2, as an Audi TTS finished second in SP3T.

The Superstars Championship headed to Portugal, hosting round five at Algarve in Portimão. Audi Sport Italia was competing on two fronts this weekend, the Superstars in Portugal and the Italian GT at Imola, thus they decided to only enter one Audi RS 5 at Algarve. The car was driven by their lead driver, Gianni Morbidelli. He qualified on the front row and dominated both races, taking four straight wins now in the series following the double win at Zolder.

The Superstars GT Sprint was also in Portugal this weekend, with some Portuguese flavour being added to the Audi line-up. The MTM Audi R8 LMS team has fielded an Audi all season long, driven by Thomas Schöffler. He has shared the car with a number of drivers during the season, and this weekend he was partnered by Portuguese Audi Sport factory driver, Filipe Albuquerque. They qualified second and third for the two races. In the end they finished second in both of the races.

Imola played host to round four of the Italian GT Championship. It proved to be a weekend where Audi Sport Italia’s resources were spread thinly. They downsized their Superstars effort in Portugal to only one Audi RS 5 entry, but they did field both of their Audi R8 LMS ultra cars at Imola. The qualifying was highlighted by pole position for Dindo Capello and Andrea Sonvico for race one. They backed up the pole by winning Audi Sport Italia’s first GT race of the 2013 season, followed by their teammates in fifth. Race two saw another podium finish as Alex Frassineti and Johan Kristoffersson finished third. Their teammates finsihed race two in seventh.

The Japanese Super Taikya held round three at Twin Ring Motegi this weekend, a five hour endurance event. Nova Engineering entered their Audi R8 LMS ultra (2013) at the event. The car was tested by Seiji Ara at Motegi at the beginning of July. They qualified seventh and Nova Engineering completed the race and finished sixth overall.

The Spezial Tourenwagen Trophy (STT) was at Spa, hosting round five. A total of six Audis took part, including a 2004 Audi A4 DTM R11 and SP4T VLN Audi TT RS cars.

The Japanese Super GT held a two-day test at Suzuka this week. Hitotsuyama Racing took part in the test, fielding their 2013 Audi R8 LMS ultra. This was also the first event where the äpr racing team fielded their new Nissan GT3 car, having switched from their 2012 R8 LMS ultra which they fielded during 2012 and the beginning of 2013. Hitotsuyama Racing did well during the test, placing within the top ten during some of the sessions.

Round three of the Victorian State Circuit Racing Championships (VSCRC) was held at Sandown in Australia. The Rod Salmon Audi R8 LMS ultra was entered by Melbourne Performance Centre. Salmon qualified fourth and finished races one to three in third, seventh and seventh respectively. He was classified sixth overall for the weekend.

The HAWK vintage racing festival was held at Road America this weekend. A number of Audi R8 race cars have competed at this event in years past, but only one Audi was entered this weekend, a very special Audi. The car was an Audi A4 DTM, the first appearance of one of these Audi race cars in the United States vintage events. It is an ex-Mattias Ekström car from the 2006 DTM season, a 2006 Audi A4 DTM “R12 plus”. The car was entered by ANSA Motorsports and driven by Eric Johnson.

Volkswagen Motorsport works WRC driver, Jari-Matti Latvala, took part in the 2013 Rally Estonia Historic this weekend. He fulfilled a dream by driving an Audi quattro rally car in the event. Latvala dominated the event from the start, but unfortunately he lost out on the win due to a technical problem. Volkswagen Motorsport FB page

The German Cup &amp; Tourenwagen Trophy was also at Spa this weekend. A single private Audi was entered in the event, the MK1 Audi TT driven by Franz-Josef Fischer.

Seven Audi R8 LMS ultra cars will now be taking part in the Spa 24 Hours next weekend. Originally nine cars had been listed on the provisional entry lists, but the two-car Sainteloc entry has been withdrawn from the event, thus leaving four Audi cars from Belgian Audi Club Team WRT, two from Phoenix Racing and one from United Autosports.

The new South African V8 Touring Car Series had some developments this week. The first car was completed and had its first test run at Queensland Raceway on Wednesday. Pace Innovations in Australia has developed the new car, closely based on the new generation of Australian V8 Supercars. The new car, developed for South Africa, is called the “GTC” - Global Touring Car. Thus far Audi and Ford cars have been confirmed for the new series, with the first car built being a Ford. The first Audi will soon be built, along with an order of further cars for the South African series which is set to begin in mid-2014. The first GTC car will undergo further testing in Australia next week, after which it will be sent to South Africa for testing. More can be read about the new GTC cars and the shakedown test HERE. Waterfest 2013 was held this weekend. The annual Audi and VW event saw many examples of road-cars and race cars from the brands. APR was well represented at the event, and their Audi R8 GRAND-AM was also on display. An Audi R10 TDI and other Audi race cars were also present.

Many of the South African Bridgestone Production Car Championship teams headed to the Phakisa Freeway in Welkom on Wednesday. It was a day of testing ahead of round six of the championship which will take place at Phakisa at the beginning of August. VMP Motorsport took part in the test, fielding both of their Audi S4 cars driven by Gennaro Bonafede and Melvill Priest.

MOMO Megatron DF1 did not take part in round three of the ELMS at the Red Bull Ring this weekend. They have announced that they will be taking part in the final two rounds of the series in Hungary and France.

The 2013 Race of Champions will again be held in Thailand. The event will be held at the Rajamangala Stadium in Bangkok, and will take place on the weekend of 14-15 December. For the last three years Audi R8 LMS cars have been used at the event, as part of the wide variety car line-up.

The äpr racing team in Japan may have switched to a Nissan GT3 for the Super GT, but their #30 Audi R8 LMS ultra (2012) was seen at the Concourse d’Elegance Japan 2013 this weekend. The car was display alongside a number of Audi road cars.

The Peter Conroy Motorsport Audi R8 LMS was part of a Bathurst 12 Hour display at the Meguiar's MotorEx event. It was on display alongside a Mercedes-Benz SLS and Ferrari 458.