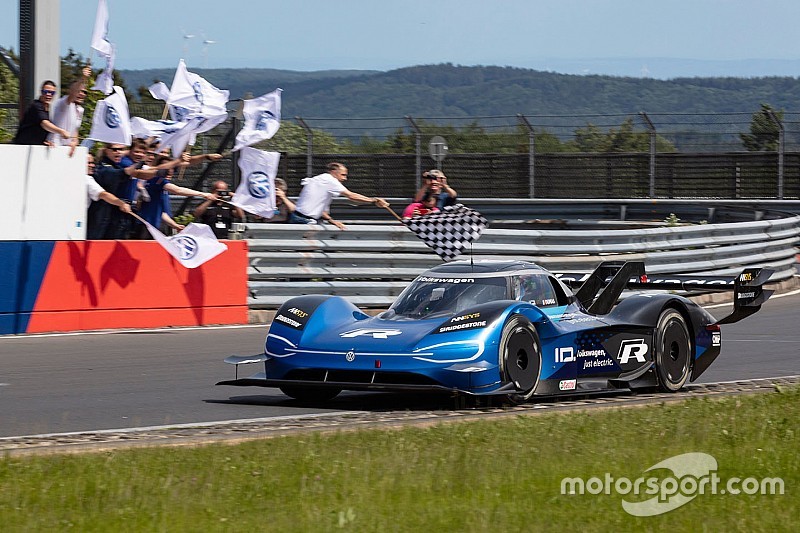 Volkswagen's I.D. R prototype has smashed the lap record for electric cars on the Nurburgring Nordschleife.

The Frenchman was some 40 seconds up on the previous benchmark held by Peter Dumbreck, who had set his time in NIO's EP9 supercar back in 2017.

Dumas, also a four-time winner of the Nurburgring 24 Hours, commented: “To be a record-holder on the Nordschleife makes me unbelievably proud. For me, this is the best and most difficult race track in the world.

"I want to thank the team at Volkswagen Motorsport, who have once again done a fantastic job. The I.D. R was perfectly prepared for the Nordschleife and it was so much fun to experience the blistering acceleration and rapid cornering speeds.”

VW had significantly overhauled the I.D. R since it broke the Pikes Peak record, giving the car revised aerodynamics and a Formula 1-style Drag Reduction System.

It also switched to Bridgestone tyres instead of the Michelins used in the US last year.

Dumas undertook practice laps around the Nordschleife in April ahead of the record attempt.

VW motorsport boss Sven Smeets said: “This impressive success story is the result of meticulous preparation by our engineers, the flawless work by the whole team during testing and of course a perfect driving performance by Romain Dumas."

Dumas' lap was also faster than the 6m11s effort set by Stefan Bellof in a Porsche 956 in 1983, which stood as the outright track record until Timo Bernhard lowered it by almost a minute last year as part of the German marque's 919 Hybrid Tribute Tour.

Behind the scenes of Williams Heritage’s new F1 trackdays