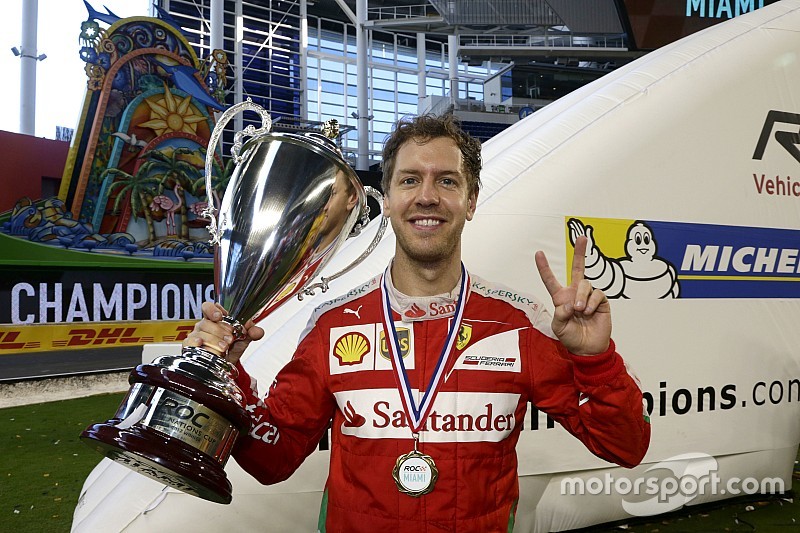 Sebastian Vettel single-handedly raced to victory in the Race of Champions Nations Cup, defeating Kurt and Kyle Busch in the final to seal the crown for Germany.

Vettel was left to represent Germany alone as Pascal Wehrlein withdrew after his flip during Saturday's individual contest at Marlins Park in Miami.

But the Ferrari F1 driver brushed aside his rivals in the group stages with ease, winning four out of his four heats, before dispatching the Colombian duo of Juan Pablo Montoya and Gabby Chaves 2-0 in the semi-finals.

After the Busch brothers controversially made it to the final at the expense of USA Team IndyCar, Vettel continued his perfect streak in the finals to seal the title for Germany 2-0.

It marks both Germany and Vettel's seventh ROC Nations Cup title, with Vettel and Michael Schumacher having previously won the event six times in succession from 2007-12.

The first group was a four-way contest between the three US teams - NASCAR, IndyCar and Rallycross - and the Canadian duo of James Hinchcliffe and ROC Factor North America winner Stefan Rzadzinski.

In the end, it was the Busch brothers and the IndyCar team composed of Indy 500 winners Alexander Rossi and Ryan Hunter-Reay that progressed, with each duo racking up four wins apiece.

Team Canada was unlucky to be eliminated after scoring three wins, two of which came from Rzadzinski, while Travis Pastrana and Scott Speed only managed one victory between them for Team Rallycross, as Pastrana beat Hinchcliffe in the GRC Lites car.

Topping the second group was Vettel - who won all four of his bouts to seal his country's place in the semi-finals - while Team Nordic and Team GB were left with just a single win apiece.

The final group pitted Brazil against Colombia and a Latin American team made up of Helio Castroneves and ROC Factor Latin America winner Gabriel Glusman.

Castroneves was soon left without a teammate however as Glusman withdrew after crashing in his opening bout against Brazil's Felipe Massa, but the three-time Indy 500 winner still managed to win two of his three heats.

However, his loss to former Penske teammate Montoya would prove decisive, as all three teams ended up on two wins each - meaning fastest combined laptimes decided the winner.

On that basis, it was Montoya and Chaves who went through, with Castroneves as well as Brazil duo Massa and Tony Kanaan dropping out.

In the first semi-final, Germany prevailed over Colombia 2-0, as Vettel racked up successive wins against Montoya and Chaves.

A lightning start set up Vettel's win against Montoya in the Ariel Atoms, while the German put on a masterclass in the ROC Buggy to notch up a clear victory against Chaves and seal his spot in the final.

The second semi-final was fought out between the US NASCAR and IndyCar squads, and went the way of the Busch brothers by two heats to one.

Kurt Busch got Team NASCAR off to the perfect start by besting Hunter-Reay in the KTM, but Rossi was able to level the score by edging out Kyle Busch in the Vuhl 05.

That led to a deciding heat between the elder Busch brother and Rossi in the ROC Buggy, with the 2004 NASCAR Cup champion courting controversy by appearing to jump the start.

"He jumped the start and admitted to it, but no penalty," said a visibly irritated Rossi as Busch was declared the winner.

The best-of-three final began with Vettel against Kurt Busch in the Atom, a bout that was won easily by the German by a healthy margin of 1.12s.

That left Kyle Busch needing a win in the second leg, held in the GRC Lites car, but once again it was Vettel who came out on top, albeit only by 0.44s, to clinch the crown.

The World beats US in Ryder Cup-style ROC finale