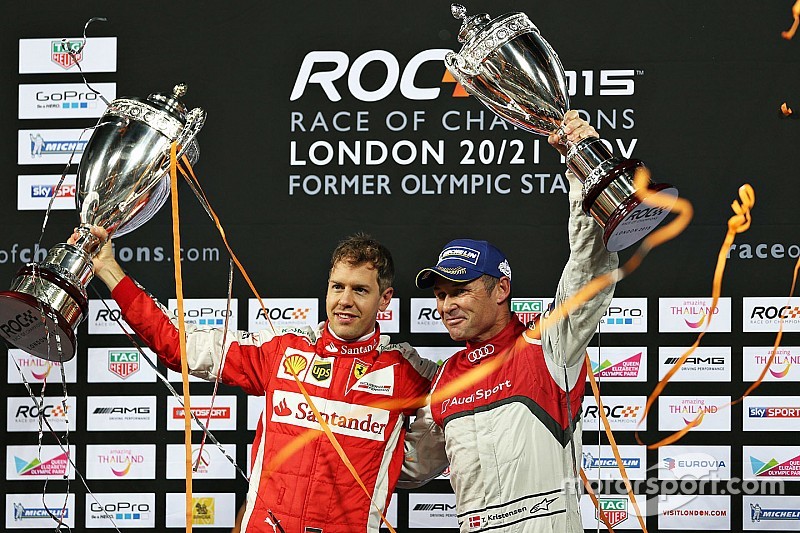 Vettel won the Nations' Cup on six occasions with Michael Schumacher, but had never made it past the semi-final in the individual category before 2015.

The German saw off Peter Solberg and Nico Hulkenberg in the early stages of Saturday's event and managed to defeat reigning winner David Coulthard in the semi-final.

His first final appearance was against Kristensen, who had lost his three previous ROC finals - and couldn't turn the tides on this occasion either.

A scrappy opening lap of his Heat 1 against Solberg did not prevent Vettel from narrowly snatching the early lead - and the German produced a much cleaner Heat 2 to sweep the match-up and advance into the quarter-finals.

His Friday teammate Hulkenberg had an even smoother run in his fixture, handily beating Daniel Ricciardo in both heats to set up a head-to-head against Vettel.

The next run produced a home upset for Jenson Button, who got eliminated by Felipe Massa in another clean sweep. The McLaren driver led the Williams man on the first lap of Heat 1, but the Brazilian drew first blood at the chequered flag - and then edged Button by 0.02s in Heat 2.

Right afterwards, Susie Wolff made an exit in straight heats against Nations' Cup teammate Coulthard, signifying the end of her competitive motorsport career.

The F1 drivers' dominance was disrupted in the next two showdowns, with Kristensen and Jason Plato seeing off former Renault F1 racers Nelson Piquet and Romain Grosjean respectively.

Plato's teammate and fellow Nations' Cup winner Andy Priaulx, meanwhile, had actually had to make his way through the preliminary Round 1, where Pascal Wehrlein put up a major fight. The 2014 runner-up won the first heat, but went straight on in the barriers in Heat 2 and lost out in the decider.

Touring car star Priaulx then went on to knock out Ryan Hunter-Reay in the Last 16 fixture, the American having eliminated Jose Maria Lopez earlier.

The final Last 16 showdown made it eight clean sweeps out of eight, with Buncombe defeating ROC Factor winner Bradley Philpot. Philpot had seen off Mick Doohan, but had no answer for the Nissan driver, who had previously ended Jolyon Palmer's hopes.

The all-German quarter-final between Vettel and Hulkenberg was run on the Race of Champions buggies and saw a controlled performance from the Ferrari man, who comfortably defeated rookie Hulkenberg in straight heats.

Coulthard also looked set to progress with ease after defeating Massa by a second in their first head-to-head run, albeit the second heat went to the Scotsman by just 0.04s.

The third quarter-final signalled an end to Plato's hopes of a ROC sweep. The BTCC man ruined his Heat 1 chances with a false start and and, while he was closer to Kristensen in Heat 2, the Dane progressed.

And, in a shock upset, Priaulx soon joined his Nations' Cup teammate among those on the sidelines. Edged by Buncombe in Heat 1, he took it to a decider after the Nissan man slid in Heat 2 - but Buncombe wound up sealing the win by 0.17s.

The first semi-final between Vettel and Coulthard produced one of the closest match-ups of the day, the duo looking evenly-matched in their bid to make the finals.

Coulthard lost out in the first heat, only to put himself back into the contention with a narrow win over the man who had replaced him at Red Bull back in 2009.

But a subsequent jump start for the Scotsman allowed Vettel to coast to the chequered flag in Heat 3, confirming participation in first ROC individual final.

However, an all-debutant final did not transpire, with rookie Buncombe yielding to Kristensen in the Radical SR3 fixture. The Dane took advantage of a slow start from the Nissan man in Heat 1 and then controlled Heat 2 as well.

The contenders put on a calm first heat on the Radical SR3s, with Vettel edging Kristensen by a few tenths.

However, the ROC buggy of Kristensen then developed a misfire right before the start of Heat 2, postponing the showdown and dropping fuel on-track.

The two challengers eventually had to head back into the pits, instead getting into the KTM X-Bows - yet were forced to wait a few minutes due to track clean-up.

And as soon as they got the Heat 2 underway, Kristensen stuffed his X-Bow into the barrier, allowing Vettel a clean run to victory and the overall triumph.