Fireball Roberts and Swede Savage...two drivers lost before their time who have more in common than you may think.

Commonly referred to as NASCAR’s first superstar, Edward Glenn “Fireball” Roberts was one of the few men in the 50’s and 60’s that could hold his own against the likes of Richard and Lee Petty and actually defeat them. Fireball was not only a talented racer, but a pretty good baseball player as well. In fact, his fast ball is what earned him the nickname, “Fireball” Roberts. 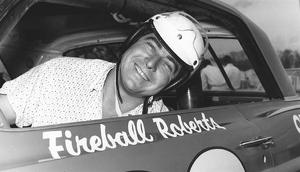 Fireball Roberts
He never won a NASCAR championship but that is simply because he never felt like trying to. Only twice in his fifteen year career did he even run more than half the races on the schedule. In 1950, he just about won the title despite failing to start 10 of the 19 events that season. That’s how good this guy was. His 33 wins and 32 poles surpass the numbers of many NASCAR champions today.

When the helmet was off, he was a fun-loving guy who liked to joke around but when he got into that race car, he morphed into a very different man. Fireball’s highly aggressive, balls to the wall style of driving struck fear into the minds of his adversaries and captured the hearts of thousands of fans. Fireball was a very unique driver for his time in the fact that he was a college graduate and very articulate when he spoke. In 1962, he won the Daytona 500 in dominating fashion over Richard Petty; which is considered the highlight of his legendary career.

Fireball kicked off the 1964 World 600 (now known as Coke 600) in the 11th position but only completed seven laps before he was involved in a horrific crash that also took out superstars Junior Johnson and Ned Jarrett. Roberts’ car flipped over and erupted into a fiery inferno. Ned was able to pull him from the mangled wreckage and it seemed like he would miraculously pull through despite his horrendous injuries. That is until he contracted phenomena. At 7:13am in room 3305 at Charlotte Memorial Hospital on Thursday, July 2, 1964, Edward Glenn 'Fireball' Roberts’ six week struggle for survival came to a tragic and unfortunate end, succumbing to blood poisoning and an incredibly high fever.

Fast forward three years, two months, and six days. We now arrive on the date that Swede Savage makes his NASCAR debut. Piloting a '67 Ford, Savage came home 16th after an engine failure. He was driving for Holman-Moody, the same team Roberts was driving for at the time of his tragic death. Swede ran two more races with the outfit, putting down strong runs of sixth and eighth. He made a few more sporadic starts in NASCAR, finishing as high as third at Bristol in 1968. He also hooked up with the famous Wood Brothers team for a bid in the 1969 Daytona 500, but that endeavor was cut short when the wheels literally fell off mid-way through the race, causing him to crash. 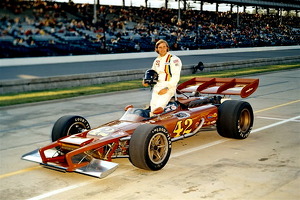 Swede Savage
Along with his stock car appearances, Savage also made starts in Trans-Am, the now defunct SCCA United States Road Racing Championship, and what is today known as IndyCar. His lone major motorsports triumph came at Phoenix International Raceway in 1970, driving an open-wheel machine. After a near-fatal Formula 5000 crash the following year, the young Swede Savage returned to the track undeterred and as motivated as ever. He was a highly versatile driver that had his entire life ahead of him, the world as his feet. A NASCAR career, a sports car career, an open-wheel career...they all sat in front of him and ready for the taking.

His maiden Indy 500, much like his one start in the Daytona 500, was ended prematurely. This time, it was due to a mechanical failure on just the sixth lap. He returned to Indy the following year and on a role after back-to-back top five finishes in the two races leading up to the May spectacle.

As Al Unser prepared to pit partway through the race, Savage was going to take the lead. Without warning however, the car got loose and came out from under him. Savage and his machine careened towards the inside wall, hitting it viciously before ricocheting back across the track in a ball of flame.

The car virtually disintegrated and yet, Savage was miraculously still conscious. He sat exposed and in a pool of flaming methanol as dozens rushed to his aid. As rescuers desperately tried to free him, another tragedy occurred. Armando Teran, a crew member for Savage's teammate, was running to the scene when he was struck by a pickup truck. He was killed instantly.

Swede, like Fireball, survived the crash. Tragically, a botched blood transfusion claimed his life 33 days later on July 2nd, 1973....eight years to the day that Fireball Roberts perished in his hospital bed in Charlotte. Both lasted three months after their fiery May crashes before their untimely deaths.

Take a moment to remember these great drivers on this weekend of great races. One was a proven legend, ready to add on to his legacy. The other, a young gun ready to leave his mark on the racing world and indeed he did, but certainly not in the way he or any of us wanted to see.

NASCAR new Chase a return to the mindset of days long past?

Masters of the game: Terry Labonte