The World beats US in Ryder Cup-style ROC finale 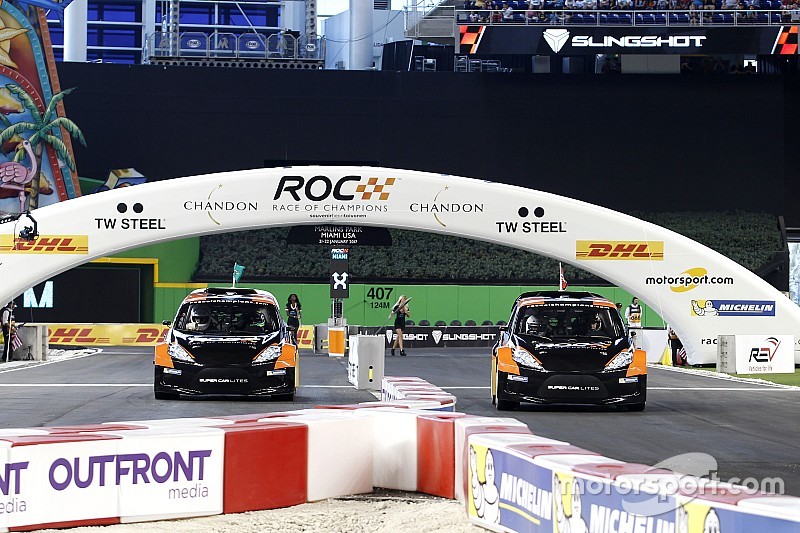 Former WRC champion Petter Solberg ensured 'The World' came out on top against the United States in the final event of the Race of Champions.

In an event resembling the Ryder Cup golf competition, the competitors present at Marlins Park, Miami were divided into Americans and non-Americans in a points-based 'ROC Relay' contest.

Team captains Brian Vickers and David Coulthard - who partnered Jenson Button in the Nations Cup earlier on Sunday - chose which of their drivers to put in which cars, determining the match-ups.

The World got off to a strong start as successive wins for Juan Pablo Montoya, Tom Kristensen and Felipe Massa gave the international squad a 3-1 lead early on, Kyle Busch winning the opening heat of the competition.

But the Americans soon fought back - wins for Alexander Rossi and Kurt Busch levelled the score at 3-3, before Scott Speed won the first two-point match against Helio Castroneves to give the US a lead of 5-3.

Travis Pastrana looked to have all but guaranteed the US victory in the next match-up, fought against Nations Cup champion Sebastian Vettel, but a jump-start in the decisive third race meant it was all square once again.

The momentum went back in favour of the US when Kyle Busch beat Jenson Button in the penultimate round, setting up a winner-takes-all finale between rallycross champions Speed and Solberg.

Although the US was ahead 7-5 at this point, the fact the final bout was worth three points meant Busch's win counted for little.

In the end, it was Solberg who came out on top against Speed in the GRC Lites cars to deny the US victory on its home turf.