Testing, testing in Daytona, day one

TESTING, TESTING 1 Oswaldo Negri, driving Michael Shank Racing's No. 60 Ford-Riley, turned a 1:41.502 (126.264 mph) -- unofficially the fastest lap of the 19 Daytona Prototypes at Daytona International Speedway for the a 'get-acquainted' test of ...

Oswaldo Negri, driving Michael Shank Racing's No. 60 Ford-Riley, turned a 1:41.502 (126.264 mph) -- unofficially the fastest lap of the 19 Daytona Prototypes at Daytona International Speedway for the a 'get-acquainted' test of the Rolex Series' new series-wide spec-tire, the Pirelli P-Zero. 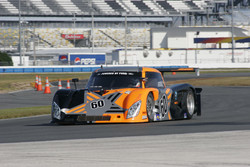 "Moving to Ford means so much more to us than just having a new 'engine,'" team owner Mike Shank said Wednesday.

"Ford's really stepped up to the plate to help us develop our cars. For instance: a Ford engineer is here today that we had no clue was coming to the test. That's the kind of enthusiasm and support Ford has shown us since we went with them -- and we've yet to take advantage of most of the technical help and testing they've offered us."

Scott Pruett: still anxious after all these years.

The seasoned veteran (who still is a tad steamed over the Miller Motorsports Park Sunchaser 1000 race) was the first to complete a lap when the Rolex Series' Pirelli tire test opened Wednesday at Daytona International Speedway. 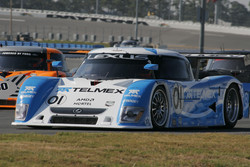 Sitting in a new Riley sled beneath (still having old bodywork) and a new Roush Yates Ford motor behind him, Oswaldo "Ozz" Negri sent a message that something was up when on Wednesday morning he jumped into his Michael Shank Racing No. 60 race car and posted a second-fast time by his third lap.

This is a car that'd never before run at Daytona having a motor for which Negri had never before so much as pumped the accelerator pedal.

Then Negri pulled it into the pits seeking a suspension tweak.

While most everything about the No. 60-car was new, one thing wasn't -- immovable objects can still dent and break it, which was the case not too long after.

Ah, race car drivers. Paid to put and run cars on the edge (Bill Riley once said his drivers weren't doing their job if they didn't have an off every now and again); always sure they can find an even better lap, tweak or no tweak.

For the Rolex 24 At Daytona, SAMAX and Milka Duno are taking another whack at it.

Joining the team for at least the Rolex 24 is Harrison Brix, late of Cheever Racing (2007) and Doran Racing (2006). The rest of SAMAX's Rolex 24 driving cast is being evaluated. 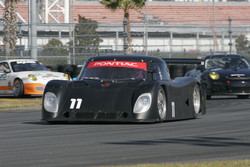 #11 SAMAX Pontiac Riley: Milka Duno.
Photo by Fastlines.
Duno is coming off her freshman year in the IRL's IndyCar Series and, just like the seasoned race car driver she is, wants "faster" equipment to give it another go.

With no intended disrespect, say what you (or Ms. Franchitti) might, Duno still has the nerve to regularly drive a car far faster and longer than most everyone alive.

American citizen and race car entrepreneur supreme Eddie Cheever and Italian Daytona Prototype constructor Picchio have joined forces beyond mere words, titles and the like - Picchio had one of its engineers on hand for the Daytona International Speedway Rolex Series/Pirelli test.

Remember that Picchio actually rolled out one of the earliest full-sized, actually-with-a-body Daytona Prototypes, unveiling it during a black-tie affair (that's formal talk for finger food that goes beyond jelly and peanut butter on saltine crackers) in 2002 at the motorsports attraction formerly known as Daytona USA (now "Daytona 500 Experience"), situated next door to Daytona International Speedway.

As for Cheever, many will remember that he moved to Italy from the United States when young (six-years old).

A skilled go-kart racer there by 15, it led to an open-wheel career in which Cheever compiled 132 Formula One starts (still a record for American-born drivers).

Talk about puckering up.

Kevin Buckler's never shied away from his admiration of Roger Penske nor his desire to emulate the longtime racing team owner, who went well beyond just racing while making his mark in life.

Buckler's doing much the same, following a similar if not exact path by starting out as a sportscar driver, becoming a winning team owner as well as simultaneously branching out into various entrepreneurial endeavors which, in Buckler's case, include an award-winning winery (and not just one or two rinky dink, minor-league awards, either).

Buckler also has to be in a lot of places at the same time.

With his new NASCAR Craftsman Truck Series team, based in North Carolina (not far from Lowe's Motor Speedway) and his Rolex Series teams, based in California (not very far from Infineon Raceway), and both being on the road at virtually the same time and only days apart in usually far different places, Buckler's frequent-flyer miles are obscenely starting to rack up.

It won't be long before Buckler gets a jet. Not that he's said he's looking for one. It's just that he will be.

Like Penske did decades ago (and still does), Buckler doesn't race much anymore but he assuredly remains in the fast lane. 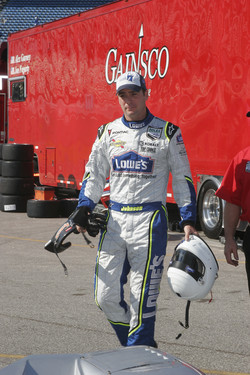 Jimmie Johnson.
Photo by Fastlines.
If Nextel Cup's Jimmie Johnson were to offer you a plane ride, you'd take it, right?

At Daytona International Speedway Wednesday to take in the Rolex Series/Pirelli test, Max Papis was inside Bob Stallings' No. 99 GAINSCO hauler when he was reminded that Johnson had sent him a text message days earlier offering Papis a ride in Johnson's airplane from Daytona Beach to Miami.

Presently making his home in North Carolina so as to work his day job as a Hendrick Motorsports test driver, Papis had earlier in the week flown to Miami with his spouse, Tatiana Fittipaldi (yes, THAT Fittipaldi) Papis, and son, Marco, driving "a family car" up Interstate 95 to the Wednesday Daytona test.

Thus, in Daytona Beach with a borrowed car, he later Wednesday drove back to Miami despite a still-standing plane-ride offer and a certain journalist's immediate offer to garage the car in the meantime.

Without going too deeply into describing his borrowed wheels, let's just say that Papis' "family car" darn sure wasn't a Yugo.

Last but not least for today's report: Jimmie Johnson didn't waste any time at all in getting up to speed in the No. 99 GAINSCO Pontiac-Riley DP.

"He got up to speed right away," said Alex Gurney, who with teammate Jon Fogarty is reigning Rolex Series DP driving co-champion. "He got in and turned a 42.4 within his first few laps. We're really stoked that he's here and already on pace."

"We'll be pulling for Jimmie this weekend when he chases that Nextel Cup for the final time. We hope he gets it."

Johnson, was here in part just seeking a little escape from the nerve-wracking pressures exacted by the Nextel Cup chase.

"I got in a little shifter car action on the way to Phoenix last week and decided it'd be nice to have a little release here at Daytona while getting in some Rolex 24 seat time, too," Johnson said.

"This GAINSCO team is prepared and as professional as any in motorsports."

Given Johnson's stature, need it be said that his words have considerable weight.

Nah. A record seven DP wins in 2007 says just about all one needs to hear.

It's one of those "talk softly and carry a big stick" things. Ya know what I mean?