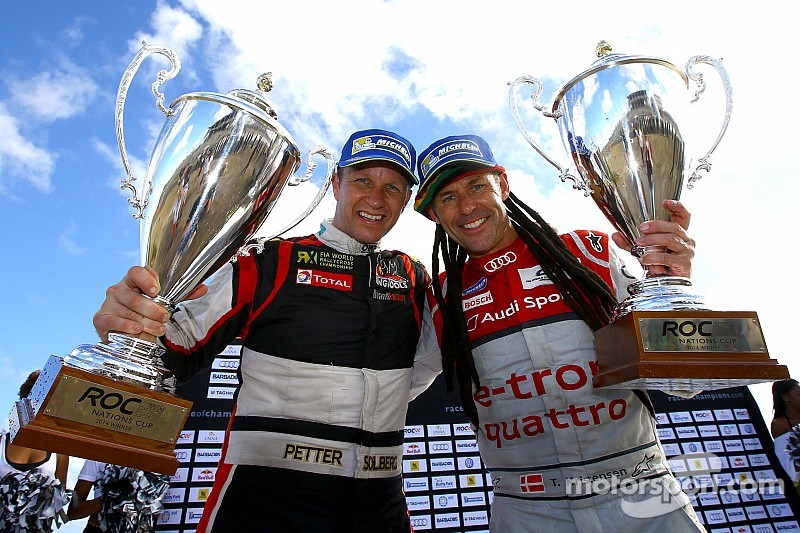 Competing at the Bushy Park circuit in Barbados, Solberg and Kristensen drove as Team Nordic and defeated a British squad made up of Formula One drivers David Coulthard and Susie Wolff.

Coulthard got his own back on Solberg today (Sunday), however, when he knocked the two-time FIA world champion out of the individual Race of Champions event in the quarter-final.

Petter said: “What an amazing event! So much fun. I have loved being down here in Barbados competing in some great cars at a great track and with a fantastic atmosphere.

“Working with a guy like Tom [Kristensen] is really good, it gives an interesting and different perspective on certain things. I think we worked well as a team and beating the Brits is always nice!

“David [Coulthard] didn’t do too badly in the end... winning the individual final (today, Sunday). He drove really well and deserved the victory, so congratulations to him. I’m just mad I didn't realise he made a small mistake while we were racing the RX cars in the RoC today. And then I made a mistake as well! Hey, great competition though. It's fantastic to compete with these guys.

“Of course, I was disappointed not to make the final of Race of Champions, but you can’t win everything and we have won a lot this year! The end of the season has been just an incredible time for me. Winning the final World RX round in Argentina was special, then collecting our World Championship from the FIA Gala in Doha, followed straight away by the Gregor Grant Award and now this – more competition and another win with ‘TK.’ Fantastic.

“Now, I think we can take a small break. I will go and say hello to my family – I haven’t seen so many of them for a long time. And we can have a break over Christmas, when my son Oliver can tell me more about his three championship wins, while I tell him a little bit about the one I won!”

Oliver Solberg, Petter’s son, won the NEZ, Norwegian and Swedish Crosskart Championships, despite being three years younger than most of his competitors.

One thing we liked about Barbados:
The atmosphere. Incredible!

One thing we didn’t like about Barbados:
Not making the final. We’re not used to that this year…