Motorsport.com contributors received awards in a variety of different categories at the 2003 Eastern Motorsport Press Association annual convention on Saturday, January 24, 2004. In the five categories for the Valvoline Internet Contests, ...

In the five categories for the Valvoline Internet Contests, Motorsport.com staffers and contributors won four of the awards.

Motorsport.com NASCAR Editor, Linda Przygodski, won the "Columns" category for her online reporting on the NASCAR Cup Series. "I am so thrilled. It always is wonderful to be recognized by your peers," commented Przygodski on being chosen to receive the award. "Thank you EMPA, I am proud to be a member of such a fine organization."

"I have enjoyed my first year at Motorsport.com as the NASCAR Editor and I look forward to another great year with our fine staff here. I would like to thank my editors also," continued Przygodski.

Ken Plotkin, a veteran reporter for Motorsport.com, and one of our outstanding photographers, won the "Race Report" award for his online deadline coverage of the Indy Racing League IndyCar Series race at Nazareth Speedway.

"Nazareth has become one of the classic paved miles for Indy cars," Plotkin said. "I am honored to receive this award, but the real credit goes to the drivers and teams. The race was so exciting that the story practically wrote itself." 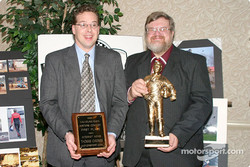 Motorsport.com's Tom Chemris and Greg Gage display their awards.
Photo by Greg Gage.
Motorsport.com contributor and freelance writer/photographer Thomas Chemris won in two categories: "Best News" for his news story on Toyota's entry in the 2004 NASCAR Craftsman Truck Series published on Motorsport.com and "Feature" for his submission to PhillyRacing.com.

"I am honored to be recognized for my work on Motorsport.com," stated Chemris. "It is very exciting to be affiliated with a media outlet that almost swept the entire internet category."

Gregory Gage was honored to receive the Ace Lane Memorial Award for his photographic work published in many print and online publications, including Motorsport.com.

"Motorsports photography often comes down to being in the right spot at the right time," expressed a very surprised Gage. "Some say there is a knack to picking the place and time. Others say it's pure luck."

The Ace Lane Memorial Award is named in memory of the late motorsports photographer who spent considerable time working at Flemington, Pine Brook, East Windsor and other speedways. The award goes to an outstanding photographer voted by his/her professional peers.

"I only know one thing for certain," continued Gage. "Tonight I am in the right place, at the right time because I am here with my friends and they have honored me with this wonderful award. I express my thaks to one and all."

Photographer Gage was also recognized in the ConocoPhillips Photography Contests in the "Action Photo" category, his photo won first prize. Gage displays his work as a freelancer for both print and online media outlets. Motorsport.com is proud to note Gage's award for a photo he submitted to Area Auto Racing News.

One of the highlights for the evening included the announcement of the prestigious Frank Blunk Memorial Award honoring Chuck Glivler. The Easton Times-Express veteran journalist was honored for his many years of covering motorsports on both the national and local level.

ARCA racer Andy Belmont and a contributor to Motorsport.com was recognized for his efforts behind the scenes on behalf of EMPA with the Art McHugh Memorial Trophy. Belmont finds time in between his racing activities to join broadcast teams as well as write a diary-style news item.