They may have experienced differing fortunes at this year's Race of Champions in Bangkok, but one thing that current MotoGP title holder Jorge Lorenzo and five-times 500cc world champion Mick Doohan had in common after the 25th edition of the event was a positive experience and an enhanced sense of humour!

It's good to have fun at the end of the season. Everyone wants to win but it's better to lose here in a show race than to lose in MotoGP!

Both made it to the semi-final stage of the Nations Cup on Saturday, Doohan with fellow Australian Jamie Whincup and Lorenzo with Le Mans legend Tom Kristensen in a Team All Stars line up, while on Sunday night Doohan flew the flag for the two-wheeled brigade in the Champion of Champions competition by getting to the quarters as Lorenzo went out at the group stage.

Perhaps at the greatest disadvantage amongst their rivals in having to switch from two wheels to four the duo did themselves proud, and redbull.com caught up with both Doohan and Lorenzo to see what they made of it all.

“It was definitely a lot of fun!” said Lorenzo, who this year claimed his second MotoGP title. “One of the hardest things about it is that you don't get enough laps to understand the limit of each car.

“My first race [in the Nations Cup] was a complete disaster! I made three big mistakes. The first was I didn't see the lights, as they changed the position so I didn't realise the race had started! 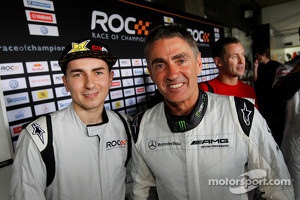 Then I hit a wall, then I spun and the engine stopped and instead of pressing the right button to start the engine I hit the fire button so it was a complete disaster!”

Despite that Lorenzo and Kristensen got down to the last four, and the Spaniard said the opportunity to roll out on a variety of four wheels was worth it.

“It's such a different experience, a completely different job. A professional driver understands every car very quickly and goes fast straight away. Us as motorcycle riders, we need much more time to understand the limits.

“But importantly it's good to have fun at the end of the season. Everyone wants to win but it's better to lose here in a show race than to lose in MotoGP!”

Doohan soaked up the atmosphere and experience too, and was able to get down to the last eight where he was eliminated by seven-times Formula 1 champion Michael Schumacher.

It's great fun. It's short and the format is perfect. Just being able to get a win away has made me happy!

“For myself coming into an event like this it's always a tall order, not only because of my motorcycling background but also because I've been retired for more than 10 years now,” he said.

“All in all it's great fun. It's short and the format is perfect. Just being able to get a win away has made me happy!”

Doohan added: “To be brutally honest I think it was always going to be tough to go up against Michael and beat him. If I could keep him in sight I was a happy man, but to realistically think you can get on top of him – I think it's too tall an order for somebody like myself!”

Hunter-Reay impressed with his first Race of Champions in Thailand