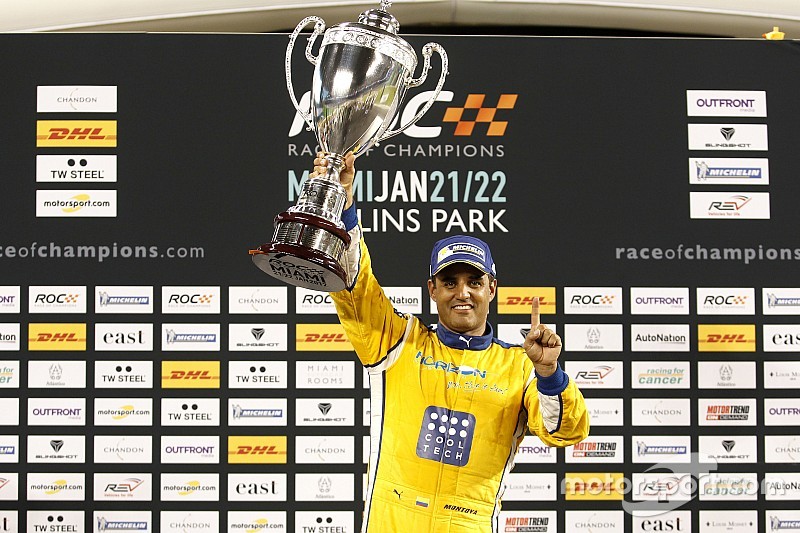 Juan Pablo Montoya emerged victorious in his first participation in the Race of Champions, defeating Tom Kristensen in the final of the individual competition of the Marlins Park, Miami event.

Montoya advanced from Group B in second place, having lost a race to Felipe Massa.

However, the Colombian would go undefeated in the play-offs – he shut out Group A winner Travis Pastrana in the quarter-finals, defeated Massa in controversial fashion in the semi-finals and then beat ROC regular Kristensen in straight heats.

Reigning ROC winner Sebastian Vettel was drawn in Group A, and would be denied a play-off berth as stunt driver Pastrana and IndyCar's Helio Castroneves progressed instead.

Castroneves edged Vettel in their head-to-head in the Radical SR3 car, although the German then bounced back by getting one over Indy 500 champion Alexander Rossi. The American had booked his group stage spot in a preliminary round face-off against GRC champ and fellow ex-F1 driver Scott Speed.

A final race against Pastrana in the rallycross cars was the decider for Vettel, and he was beaten in a drag race to the line by the American, who moved on from the group stage unbeaten.

Group B action was overshadowed somewhat by a scary-looking crash for F1 driver Pascal Wehrlein and passenger, as the German rolled his three-wheeled Polaris car after colliding with Felipe Massa after the finish line.

Wehrlein, 2014 ROC runner-up, was unhurt, as was his passenger. Having been edged by Massa to the line, the German exited in the group stage, while the returning Williams F1 driver progressed.

In the other deciding race of the group, ROC regular Petter Solberg faced off against debutant Montoya in the Polaris, the Colombian prevailing to book a play-off spot at Solberg's expense.

The Brazilian, who had his ROC Car's wheel detach as he bounced over the kerb, was eliminated alongside fellow IndyCar driver Hinchcliffe, whereas Kyle Busch was through to the play-offs.

Finally, Group D was 2014 champion David Coulthard's domain. He and fellow event regular Kristensen secured ensured they'd advance with two early wins each over NASCAR's Kurt Busch and IndyCar's Ryan Hunter-Reay, before Coulthard took the top spot in the group with a win over the Dane.

A closely-matched Montoya – Pastrana duel opened the quarter finals, the pair squaring off in the Vuhl 05 lightweight supercar.

In a best-of-three format, the Colombian edged Pastrana by two tenths in the first race, and then denied him a decider with a one-tenth victory in the rematch.

The Button-Kristensen match-up was the first one to go to a decider heat, as Button responded to an opening-heat defeat by beating the Le Mans legend in a drag race the second time around.

Kristensen, however, returned the favour in the third heat, prevailing by less than a tenth over Button.

Massa had claimed a comfortable win in the Radical SR3 in his original race against Montoya in Group B, but the play-off duel in the ROC Buggy went the Colombian's way, albeit in controversial circumstances.

In the first heat, Massa was ahead at the line, but the Brazilian had hit the barrier on exit of the final corner – and was soon handed a five-second penalty that handed advantage to Montoya.

Montoya then prevailed in the second battle by just 0.076s, and the pair lined up at the line after the run, seemingly in anticipation of a final showdown.

As the situation was ultimately explained to Massa, the Brazilian was visibly annoyed, believing he should've gotten away with a yellow flag warning for the infringement. “I hit once, it's part of the rules. I lost time hitting the walls, I didn't want to hit it. I don't accept that,” he said, storming off.

The second semi-final was marginally less contentious but no less dramatic, as Kristensen faced off against Coulthard in the Vuhl.

Having lost to Coulthard in the group, the Le Mans legend defeated the Scotsman in the first heat and then ensured his spot in the final with a narrow 0.06s victory.

The opening heat of the Montoya – Kristensen showdown was run in the Olsbergs MSE-built GRC Lites car, and the Colombian reigned supreme.

And Kristensen, who had lost to Vettel in straight heats in the 2015 final, was then once again denied a decider .

The Dane ran Montoya close in the KTM X-Bow, but the Colombian prevailed, with a 0.845s gap over the line.