The Gorsline Scholarship is presented by Gorsline Company, of Rochester, N.Y., the leader in high-risk motorsports insurance.

SEBRING, Fla. - Matthew Brabham, of Indianapolis and Gold Coast Australia, was presented the 20th Gorsline Scholarship by John Gorsline today at the Mobil 1 Twelve Hours of Sebring fueled by Fresh From Florida. 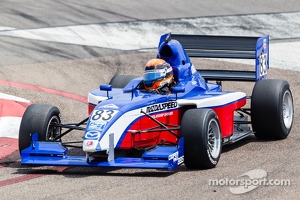 Brabham, 20, is part of the Brabham Family dynasty as grandson of three-time Formula One champion Jack Brabham, son of four-time IMSA GTP champion Geoff Brabham and nephew of two-time ALMS LMP champion David Brabham. With this scholarship he will work with Dr. Jacques Dallaire, Director of Performance Prime, on an individually-designed performance-enhancement program, and will benefit from a unique training program at Jim Leo's PitFit Training - all courtesy of Gorsline Company.

The Gorsline Scholarship is presented by Gorsline Company, of Rochester, N.Y., the leader in high-risk motorsports insurance. It recognizes aspiring drivers by providing programs with tools that will assist them in developing skills on and off the track to help attain their professional goals.

Two other young drivers were also considered for the Scholarship: Sean Rayhall, 19, of Winston, Ga., and Madison Snow, 18, of Lehi, Utah.

"At such a young age, Matthew is already an accomplished racer," said Gorsline, principal of Gorsline Company. "All three of the candidates for the 20th Gorsline Scholarship are worthy recipients. It was a tough decision, but we selected Matthew. We're confident he'll benefit from the performance-enhancement and fitness training programs that Dallaire and Leo will provide as he progresses in his racing career."

"I'm absolutely honored and it really means a lot to me, for sure," said Matthew, who will begin his 2014 racing season at the Firestone Grand Prix of St. Petersburg (Fla.) on March 28-30, driving for Andretti Autsport in Indy Lights. "I've known John Gorsline for a while now, through my father, and to have my name on the list with previous recipients with such outstanding pedigrees is really, really cool and special. I've worked with Jim Leo and Jacques Dallaire before and they are such massive influences, especially in American motorsports. So, to be on board with them helping me through this really, really important time of my career is going to be huge. I'm really looking forward to meeting with them and working with these programs to help me succeed in my racing career."

Brabham began racing karts at age 7 in Australia, winning 46 races including the 2004 NWS "Midget" State title and the 2007 QLD "Rookie" State title, before moving up to the Jr National Light class. In 2008 he won both the NSW and QLD State Jr National Light titles and in 2009 the Jr Rotax Young Guns title. He then switched to Formula Ford, finishing second once and third once in the Victorian State series and was selected to join the CAMS Rising Star program for 2010. He competed in the Victorian Formula Ford State Series in 2011 and in the Australian National Championship, winning eight State races and two National races. The following two years saw him become the 2012 USF2000 Series Champion and Rookie of the Year, with four wins, three track records and six poles, and the 2013 Pro Mazda Series Champion and Rookie of the Year, with 13 wins and 10 poles. He won the 2012 Team USA scholarship to compete in three British Formula Renault 2.0 races, and was awarded BRDC Rising Star membership in 2013 and 2014. He wiil race for Andretti Autosport in Indy Lights in 2014, part of the Mazda Road to Indy Scholarship.

Previous recipients of the Gorsline Scholarship are: