Marlins Park roof to be closed for 2017 Race Of Champions 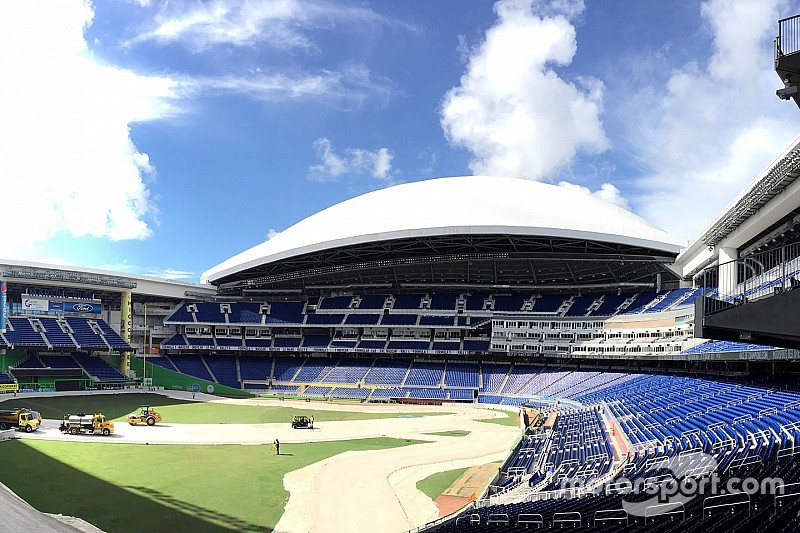 Race Of Champions organiser Fredrick Johnsson has revealed that the roof will be closed on Miami’s Marlins Park stadium for this weekend’s 2017 Race of Champions.

The star-studded stadium-racing event is being hosted in America for the first time in its 27-year history.

Although there’s no rain in the forecast for either day this weekend, Johnsson has decided the sliding roof of the iconic Major League Baseball venue will be shut for the racing activities.

“Normally we don’t mind if it’s raining, it makes the track slippery and even more exciting,” said Jonsson. “In this case, we’re expecting great weather – like always here in South Florida – so we’re leaving the roof open for the opening show.

“We’ll have parachutists and jumpers from the Red Bull Air Team, and then we’ll close it just before the racing starts.

“It’s more because of the sun, than anything else. Otherwise there’s a huge shadow that will move over the track, and the contrast is not great for television. And it will be more comfortable for the spectators too.”

The track build is already well underway, with the first asphalt being laid on Monday.

“It’s not a simple task turning a modern stadium into a state-of-the-art motor racing track, but we’ve done it for many, many years now,” added Jonsson. “It takes about a week for us to transform the stadium to our needs, and then two days to remove our stuff and put it back to normal so they can play baseball here.

“Miami is the perfect place for Race Of Champions – it’s the capital of Latin-America and there’s a lot of passion for racing here.

“To be able to have the champions from Formula 1, NASCAR, IndyCar, Le Mans and action sports, they all come together in one place to see who’s the fastest of them all in identical cars. Only the drivers make the difference.”

Hunter-Reay: I picked hardest group in Race Of Champions draw