Heikki Kovalainen, the 2004 World Series by Nissan champion stunned the competition and the crowd at the Stade de France in Paris to walk away with the Race of Champions trophy. The Finn became the youngest driver to win the RoC and he did it ...

Heikki Kovalainen, the 2004 World Series by Nissan champion stunned the competition and the crowd at the Stade de France in Paris to walk away with the Race of Champions trophy. The Finn became the youngest driver to win the RoC and he did it against the world's best. 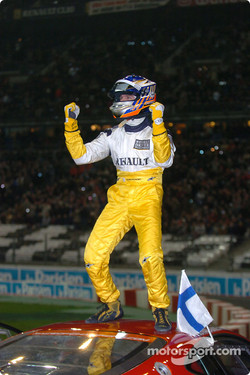 The Race of Champions 2004 winner Heikki Kovalainen celebrates.
Photo by IMP.
"I just can't believe it," expressed Kovalainen. "I just tried to attack a little harder, brake a little later. Unbelievable, I beat both World Champions!"

The final came down to Kovalainen and Loeb, the 2003 RoC winner. Kovalainen worked his way to the final by defeating David Coulthard (F1), Jean Alesi (F1 and DTM), and then on the 1 kilometer figure-of-eight track, Kovalainen bested Schumacher.

"I can't lie," Schumacher admitted. "Of course I tried to win! But I came here to enjoy myself, and I succeded in that, at least." 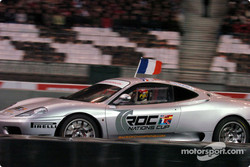 The two finalists ran equal Peugeot 307 WRCs in their first heat. One would have expected Loeb to have the advantage, yet Kovalainen shocked the crowd by besting Loeb by 0.08 seconds.

"I beat rallying's World Champion in a WRC car. Amazing! And it's not every day you get a chance to beat Michael Schumacher," said a very happy Kovalainen. "That was a big moment."

In the second heat, the two switched to equally-prepared Ferrari 360 Modena Challenges. Again, Kovalainen won the event even though Loeb had crossed the line first, as a ten second penalty for touching a barrier cost Loeb the heat victory.

Loeb admitted that he touched the barrier and accepted the defeat with grace. "It's been an enjoyable afternoon and I love the atmosphere," said the Frenchman who was already looking forward to the Nations' Cup competition.

Loeb then teamed with fellow countryman Alesi to take the trophy for France in the RoC's Nations' Cup. In the finals, the duo had to beat the team from Finland: Kovalainen and Gronholm. 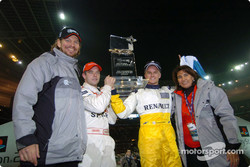 The Race of Champions 2004 winner Heikki Kovalainen with runner-up S?bastien Loeb, Fredrik Johnsson and Mich?le Mouton.
Photo by IMP.
Kovalainen held off Alesi in each of the first two heats to give Finland a 2-0 lead, but it was not to be enough to win the final, as Loeb took the second pair of heats. Loeb appeared to be some barrier contact in the fourth heat, but was not called on it by the judges.

That set the stage for a "grudge match" to decide the Nations' Cup: Loeb and Kovalainen met in a single heat to decide the title. The final run, again in 360 Modenas, turned out to be somewhat of an anticlimax, though, as Kovalainen's car experienced an electrical problem, forcing him to crawl around the track while Loeb sprinted to the finish to claim the Cup for France.

"In the end, it was a rather lucky win," commented Alesi. "But it's really been something exceptional to be able to race in a stadium like this.