Good showing by the Chinese driver in the Race Of Champions individual challenge in Thailand.

Chinese racing driver Ho-Pin Tung has made it to the semi finals of this years´ edition of the Race Of Champions in Bangkok, Thailand. In the quarter finals he met Formula 1 winner David Coulthard in a man to man battle. 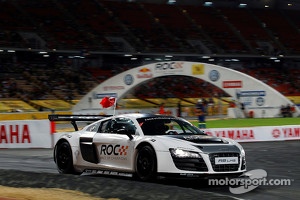 A fotofinish had to decide who won, it was the Scotsman, so Ho-Pin Tung saw his way to the semi finals cut off.

In the Nations Cup race on Saturday team China did not make it, but Ho-Pin Tung was the fastest driver overall in the ROC car, which result was rewarded by a promotion to the individual Race of Campions on Sunday.

Also the third heat was a win for Ho-Pin Tung. He promoted to the quarter finals as winner of Group B where he was beaten by 0.05 seconds by David Coulthard.

Romain Grosjean was the overall winner in the Race of Champions and the German couple Sebastian Vettel and Micheal Schumacher ( together ten F1-world championships !) took the Nations Cup home.