The Suomussalmi Speedster navigates rough waters in wake of Hamilton's success. Heikki Kovalainen continues the tradition of a small nation of five million inhabitants turning out talented racing drivers. Ever since 1982, when Keke Rosberg, a Finn ...

Heikki Kovalainen continues the tradition of a small nation of five million inhabitants turning out talented racing drivers. Ever since 1982, when Keke Rosberg, a Finn born in Sweden, became the country's first world champion, the Nordic nation has taken great pride in producing two more champions and other top line pilots. 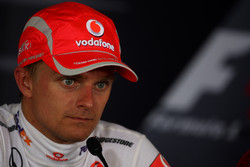 Rosberg's own client, Mika Hakkinen, captured two titles in 1998 and 1999 with McLaren. This was followed in 2007 by a dramatic come-from-behind victory for Kimi Raikkonen. Raikkonen had spent five seasons at McLaren, missing out on the big glory, but grabbed the title in his first year with Ferrari.

Mika Salo was no slouch either. He grew up on the same street in Helsinki as Hakkinen, and showed what he could do in a competitive machinery when substituting for the injured Ferrari star Michael Schumacher during the 1999 season.

JJ Lehto, another Rosberg client, won the British Formula 3 championship and then saw his career de-railed after a neck-breaking injury in a pre- season testing crash at Silverstone. He was to partner Michael Schumacher at Benetton for the 1994 season.

Heikki Kovalainen was born on October 19th, 1981, in the reindeer rearing part of his native Finland. Speed was his calling from the time he raced in karting, winning the Scandinavian Championship and Elf Masters at Bercy (Paris) in 2000.

Moving to England in 2001 to commence his single-seater career, Kovalainen was a race-winner and pace-setter from the beginning in Formula Renault, finishing in the top five in the championship with two pole positions and three fastest laps.

Kovalainen continued his climb in 2002 by competing in the British F3 Championship. Five wins, three poles and three fastest laps saw him finish third in the final standings. The Finn also performed well in the famous Macau street race where he was second, and placed fourth in the Marlboro F3 Masters at Zandvoort. 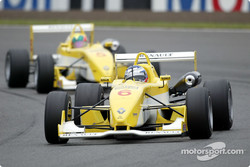 The next two seasons saw Kovalainen compete in Nissan World Series, now renamed for Nissan's parent company, Renault. In his first year in the series he finished second but stamped his authority in the second season, winning the championship with six wins and 11 podium finishes from 18 starts.

It was at the end of 2004 when Kovalainen served notice of his talents and grabbed the attention of motorsports media worldwide. The event was 2004 Race of Champions at Stade de France. Team Finland took second spot in nations' cup with Kovalainen and rallying great Marcus Gronholm.

In man against man competition to decide Champion of Champions, both rallying legend Sebastien Loeb and Herr Schumacher had to settle for second best behind the latest Flying Finn.

Kovalainen kept his winning ways when he stepped up to GP2 in 2005 with Christian Horner's Arden International. After five wins and leading most of the season he lost the championship in the final round in Bahrain to Nico Rosberg-son of Finland's first world champion.

Kovalainen started his Formula 1 apprenticeship as test driver for Renault for 2006 season. When team's super star and double world champion, Fernando Alonso, left the British based French team for McLaren, Kovalainen was announced as teammate to veteran driver Giancarlo Fisichella.

Kovalainen endured a difficult start to the 2007 season and was lost in Albert Park at the opening round in Melbourne. Flavio Briatore, the tough Ranger he is, insulted his rookie driver by saying it was not Kovalainen but his brother doing the driving in the Australian Grand Prix. However, the Finn never lost his cool when the heat was on and was soon outpacing his Italian teammate.

The defining moment of his tough first season in Formula 1 in a difficult car came in monsoon conditions at Mt. Fuji circuit. In a Battle of Finns to the finish line, Kovalainen held off Kimi Raikkonen's Ferrari for several laps in the closing stages. Raikkonen was able to slip by to take second place only to see his countryman splash by and regain runner-up slot.

Kovalainen finished the 2007 season in seventh position in the drivers' championship. Thanks to the tumultuous season Alonso endured at McLaren, where he found the rookie Lewis Hamilton was no Giancarlo but all go-go, the Spanish driver switched camps again and went back to Papa Flavio, who, ironically, was Alonso's manager when his driver deserted him for what he thought were the wonders of Woking. Kovalainen once again filled the seat left vacant by Alonso. 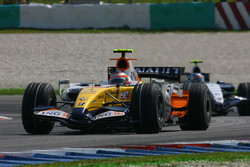 It took Kovalainen only one race to know that his new teammate, Lewis Hamilton, was no ordinary commodore and why Alonso suffered a sinking feeling working the night shift to be numero uno at McLaren. Both Kovalainen and Hamilton made their Grand Prix debuts in Australia the year before, both in very different circumstances and results. A year later they were strolling and racing in Albert Park as teammates.

Hamilton took pole and victory with ease, helped in part by both Ferraris having an off-day and retiring with engine problems. Kovalainen finished fifth and his only consolation was setting the fastest lap of the race, despite suffering through the embarrassment of hitting the pit lane rev limiter on the main straight after making a great pass on Alonso.

Kovalainen's first podium of the 2008 season came in the simmering heat at Sepang in the Malaysian Grand Prix. It was not until the final lap of the Hungarian Grand Prix in August that saw Kovalainen back on the podium: Massa's last lap misery with an engine failure on board his Ferrari was Kovalainen's glory in what would turn out to be his only victory of the season.

In between Kovalainen suffered a high speed accident in Spain after a tire failure sent his McLaren deep into the tire barrier. Fortunately, the Finn escaped major injuries and despite being flown by helicopter to hospital he was back in saddle for the next round in Istanbul, the Turkish Grand Prix, where he finished 12th. Teammate Hamilton was second to race winner Felipe Massa.

In the streets of Monte Carlo both McLaren drivers shared the second row behind the red Ferraris of Massa and Raikkonen. In changing conditions Hamilton went on to become the first English driver to win the Monaco Grand Prix since Graham Hill in 1969, while Kovalainen collected the final point from his eighth place finish.

Starting with the British Grand Prix Kovalainen had two opportunities during the season to make his mark. Both were in wet conditions and he slipped on each occasion

At Silverstone he started from his first ever pole position and led the first four laps. Teammate and home crowd favorite Hamilton tracked him down and it was "adios amigo" after Hamilton forged ahead on lap five. Kovalainen ended the day in fifth place.

The McLaren drivers shared the same result in the next race, the German Grand Prix at Hockenheimring, and second half of the season began to develop into a Hamilton vs Massa battle as defending champion Kimi Raikkonen went into a deep Nyquil era, ironically finishing the season with two victories, same as Fernando Alonso in the less-than competitive Renault, but that's another sad story.

The historic Monza Autodromo handed Kovalainen second chance as he qualified on the front row alongside pole-sitter Sebastian Vettel in a Toro Rosso. The young German reigned supreme in the rain and Kovalainen was kept at bay all race long. 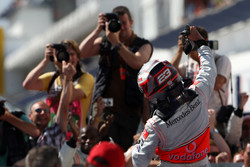 When the season ended with the last lap thriller in Brazil, Hamilton had entered the history books as the youngest-ever world champion with 98 points and five wins. After victory in the opening race of the season he had described his car as "a dream to drive". It was in this "dream car" that his teammate would wake up to find a lonely and lucky victory and two other podium finishes during the entire season, placing him seventh in the championship, 45 points behind his teammate.

In 2009, Kovalainen must come out from the shadows of Hamilton and write a new chapter and challenge him to the title. He must do what Massa did to his fellow countryman in 2008. Otherwise, they say, winters are very long, dark and cold in Suomussalmi.