Giancarlo Fisichella must be the happiest guy in Formula One these days, his life-time ambition has been fulfilled, he has won a contract to race the last five races of the season for the legendary Ferrari team. And the timing couldn't be better: an ...

Giancarlo Fisichella must be the happiest guy in Formula One these days, his life-time ambition has been fulfilled, he has won a contract to race the last five races of the season for the legendary Ferrari team. And the timing couldn't be better: an Italian will race an Italian car in the Italian Grand Prix at Monza. It will be a boost for the Ferrari team, but also for the Italian tifosi. 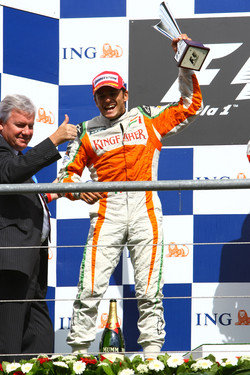 His second place in Belgium proved to be the ticket to the Ferrari team.
Photo by xpb.cc.

after 13 years he will now race for his beloved Ferrari team. Sofar Fisichella has raced in 225 Grands Prix, scored 3 pole positions, 3 wins and 18 podium places and has scored in total 267 championship points. Time to take a closer look at the previous 13 years of his Formula One career.

Giancarlo Fisichella started his career in Formula One in a Minardi in 1995. He started as test driver but in 1996 he got his first chance to race Minardi F1 car. Due to financial problems he was replaced after just eight races.

Fisichella left Jordan and was contracted by the Benetton team. Unfortunately Benetton's engine partner Renault left and after that Benetton had a chronic lack of success. In 1998 Fisichella managed to score a second place during the races in Monaco and Canada. In that same year he scored his first pole position in Austria. In 1999 he scored a third place in Canada, in 2000 he scored three podium places and became sixth in the championship. In 2001 the problems of the Benetton team increased, Fisichella only managed to become third in Belgium, and ended on the eleventh place of the championship.

In 2002 he rejoined the Jordan team, but Eddie Jordan had by that time enormous financial problems, and the team was even weaker than during the 1997 season. The Jordan was very slow but Fisichella scored a few points and ended eleventh in the championship with only 8 points. In 2003 things were not really better, but oddly enough he took a surprise victory in Brazil.

During the race the rain came pouring down and Alonso and Webber crashed very heavily, the safety car came out and all of a sudden Fisichella was behind race leader Kimi Raikkonen. The rain didn't stop and the stewards waved the red flag to end the race, while Raikkonen was in first place and Fisichella in second place. A few hours later, after studying the race data, the stewards came back on their initial decision and declared Fisichella as the race winner. During the next race in Monza, Fisichella got his first place trophy back from Kimi Raikkonen and could finally celebrate his first win in Formula One.

Fisichella was unhappy with the performance of the Jordan and Peter Sauber contracted him in 2004. The Sauber car was quicker than the Jordan and Fisichella scored 22 points and became eleventh in the championship. 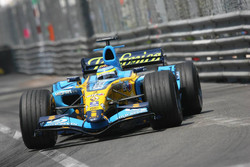 In 2005 Renault decided to come back to Formula One and team boss Flavio Briatore hadn't forgotten about his fellow countryman Fisichella and offered him a contract. He won the first race in Australia, a great start of the season for him, but after that things went downhill. Team mate Fernando Alonso won the championship in 2005 and Fisichella ended on fifth position with 58 points.

In 2006 things looked brighter for Fisichella, after taking pole position for the Malaysian Grand Prix he also won the race. Although he was a regular point scorer, he was always in the shadow of Alonso, who won the championship for the second time. Fisichella scored 72 points and became fourth in the championship.

In 2007 Alonso joined the McLaren team, and Fisichella became first driver at Renault, joined by Heikki Kovalainen. But as it turned out, Renault lost a lot of ground in 2007 and to make things worse, team mate Kovalainen showed on numerous occasions that he was faster than Fisichella. Kovalainen became seventh in the championship with 30 points and Fisichella eighth with 21 points.

In 2008 Force India boss Vijay Mallya contracted Fisichella as their first driver, with Adrian Sutil as second driver. Unfortunately the Ferrari powered car was the slowest car of the field, and both drivers frequently ended up on the last two places of the grid. In 2009 Force India decided to race with the Mercedes engine, and also vowed to double their efforts to improve the car's performance in an attempt to score points in the championship.

The start of the season was again very disappointing for both drivers, but gradually all the work began to pay off. During the European Grand Prix in Valencia it became clear that team had made a major step forwards, and during the last race in Belgium the Force India team surprised the whole world with a sensational pole position for Fisichella.

During the race in Belgium Fisichella showed everyone that he was still capable of winning races, and ended in second place behind the Ferrari of Kimi Raikkonen. He did not make one single mistake, not even a tiny one, he did not put one wheel in the wrong place, and was always within 2 seconds of Raikkonen. He took advantage of all the experience he had gained during his career, stayed focussed on his job, his performance was just 100% perfect. His second place in Spa-Francorchamps is probably the greatest achievement of his race career sofar.