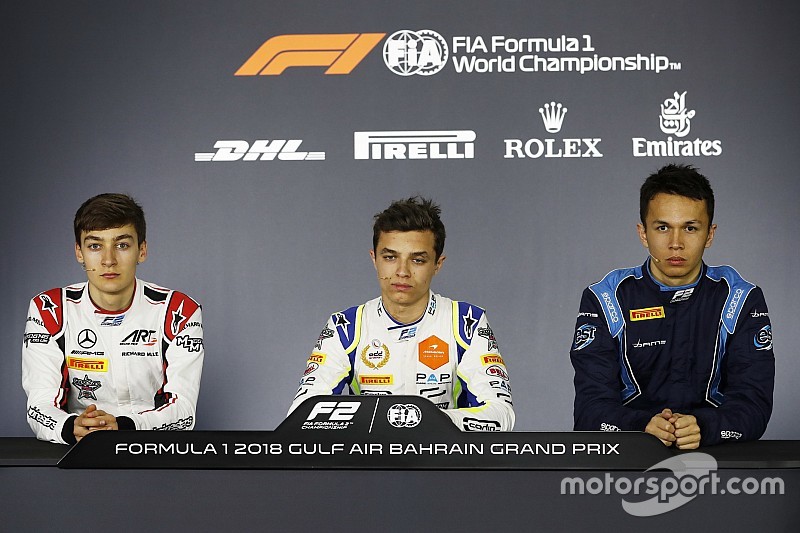 By user stevewhitfield on Motorsport Fans

One of the most exciting features heading into the 2019 Formula 1 season is the addition of three rookie drivers to the grid: George Russell, Lando Norris and Alexander Albon. As well as all originating from the UK, the trio filled top three places in last year’s FIA Formula 2 championship.

So how will each of the F2 graduates fare in their first season int eh top tier of single seater racing? Will they follow in the footsteps of 2017 F2 champion Charles Leclerc, by having a strong debut year, or will they struggle, like the 2015 (then GP2) champion Stoffel Vandoorne?

Lando Norris was the first of the three new recruits to land a 2019 season, with McLaren, having been backed by the team for the last few years during his junior single seater career.

Comparisons with Vandoorne will be inevitable – Lando is effectively replacing the Belgian in the team – as Stoffel was the last McLaren junior to be promoted to the F1 team, but largely struggled in his two full seasons in F1, and now has departed for Formula E.

McLaren’s woes over the past few seasons have been well publicised, and this undoubtedly did not help Stoffel adapt to F1, especially with team-mate and double F1 world champion Fernando Alonso beating him almost every race weekend in the other car.

Timing is everything in F1, and Lando is potentially joining McLaren at the perfect time. The penny finally dropped at Woking in 2018 that things needed to change, once their struggles could no longer be blamed on their power unit – they used the same Renault PU that Red Bull won four races with last season – and with Fernando Alonso having departed, expectation levels, from inside and outside the team, will be far more modest heading into the new season.

A slightly less pressurised environment will be welcomed from McLaren’s latest protégé as he learns the ropes, and being partnered with Carlos Sainz could be the perfect fit too. Whilst Carlos already has four seasons of F1 experience, he is new to the team, having switched from Renault over the winter. Lando already knows the team inside out from his years spent as a junior driver, and worked with the F1 race team during his two FP2 outings in 2018.

Lando has proven over the last few years that he can quickly get up to speed in any new car that he has driven, whether it be an F2 car, an LMP2 car at Daytona, or the 2018 McLaren F1 car in FP2 sessions. Therefore, you wouldn’t bet against Lando getting quickly up to speed in McLaren’s 2019 challenger, and pushing his team-mate early in the season.

George Russell was the next of the trio to seal a 2019 F1 drive, when he was confirmed as a Williams driver, one month before being crowned F2 champion in Abu Dhabi. It was an impressive title for the King’s Lynn-based driver – who also won the GP3 title in 2017 – not only winning the F2 title in his first season but being arguably one of the strongest fields in the series for a few years, given that both the second and third placed drivers in the championship are also making the step up to F1 this year.

Like Lando, George is making his F1 debut with a team that have struggled in recent years, enduring a disastrous 2018 campaign, in which they only scored 7 points and finished last in the constructors’ championship. Williams’ 2018 car suffered from major aerodynamic issues, which sapped the drivers’ confidence. It’s imperative that their 2019 challenger does not suffer from the same issues – even if the car doesn’t prove to be one of the fastest on the grid – to at least give George a car that he can gain confidence in.

Like any driver, Russell’s record against his team-mate will dictate how much of a success his first F1 season will be regarded. Robert Kubica’s appointment as Williams’ second driver is another feel-good story heading into the 2019 season, the Polish driver returning to the series for the first time in more than eight years after his life-threatening rally crash in 2011.

Questions will be inevitably asked about whether Kubica will prove to be as fast as he was when he last competed in F1 in 2010, not just because of the permanent damage to his right arm – sustained in his rally crash – but also because of the amount of time he has been away from the sport, in which the cars have changed significantly.

George has a great opportunity to get the better of Kubica right form the start of the season, especially with the momentum that he will bring form his F2-title winning season last year. Another reason why Vandoorne potentially struggled to adapt to F1 was because he had to wit a year after winning the GP2 title before he made his first full season F1 debut. For George, this isn’t an issue and he has also racked up plenty of F1 testing milage with Mercedes and Force India previously.

As a Mercedes junior driver, Russell is sure to have his eyes on a seat with the Mercedes F1 team in the future, but he hasn’t talked about the Williams team being a stepping stone to great things so far: since he signed for Williams, he has talked about this being a long term deal with the team, where he wants to play a key role in helping the Grove based team move back up the grid. Such an impressive attitude is likely to stand him in good stead in his first F1 season.

Alexander Albon is arguably the less-known of the 3 F1 debutants this year, but his rise to F1 has still been very impressive and has a feel-good story to it. The Thai-British racer was dropped from the Red Bull junior programme in 2012 after a difficult Formula Renault Eurocup campaign.

Despite nearly quitting racing altogether on the back of this, Alex worked his way up the junior ladder without the big backing of an F1 team – unlike Lando and George – and impressed enough for Red Bull to re-sign him for 2019, to race for Toro Rosso in F1. His 2018 F1 campaign, in which he held his own against Norris and Russell, finishing third in the championship, was his breakthrough year and undoubtedly is what persuaded Red Bull to take him back – and for Nissan to initially sign him up to their Formula E team before the contract was cancelled when Alex understandably decided to grab the F1 opportunity that arose subsequently.

The Toro Rosso team has proven to be a stepping stone for drivers to move up to the Red Bull team over the years – which has been the case for Sebastian Vettel, Daniel Ricciardo, Max Verstappen and Pierre Gasly – but there have also been plenty of drivers that have ended up on the F1 scrapheap having not impressed enough at Toro Rosso.

It’s too early to say which way things will go for Alex, but he has a good opportunity to shine against his team-mate Daniil Kvyat. The Russian proved to be the surprise choice to partner Albon for 2019, having been axed from the Red Bull family at the end of 2017 after a trouble campaign with Toro Rosso.

Whether Daniil has improved significantly during his year spent at Ferrari as a development driver in 2018 remains to be seen. During his last spell in F1, Kvyat displayed some mental fragility at times when things didn’t go well, and Albon could have the opportunity to capitalise and get the upper hand if his Russian team-mate doesn’t start the season well and drops his head again.

Toro Rosso’s driver pairing does have a stop gap feel to it, as Red Bull wait for their junior drivers – such as Dan Ticktum - to earn enough superlicense points to make the jump to F1, but at the same time Alex looks to have the better chance of the current two drives of staying with the team beyond 2019, especially if he can get the better of Kvyat.

F1’s newest trio appear to have joined teams at the right time, paired with team-mates against which they all have the opportunity to shine, and with the talent hat Norris, Russell and Albon undoubtedly have, they all have a good chance of having a successful debut year.