The stars did not shine on the Briton in Bangkok this weekend for the 2012 ROC; even a accelerator pedal caused him Piraulx grief.

This year’s Race of Champions was ill-fated for BMW DTM-Pilot Andy Priaulx (GB). On Saturday, Priaulx and his Team Great Britain team-mate David Coulthard (GB) narrowly missed out on progressing to the knock-out phase in the Bangkok’s (TH) Rajamangala Stadium. 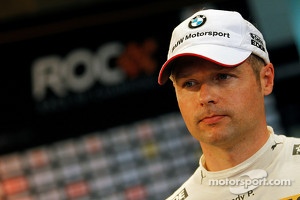 Priaulx was also out of luck in Sunday’s individual competition. After defeating Ho-Pin Tung (CN), he went up against Tom Kristensen (DK) in the final race of the preliminary round for a place in the quarter-finals. However, the accelerator pedal on Priaulx’s car stuck as he braked into the first corner of the narrow stadium circuit.

There was nothing the three-time World Touring Car Champion could do to prevent the ensuing crash. “I know that these things happen in motorsport,” said Priaulx. “I had fun as always, however, and will be back again next year to try again.”

Priaulx was making his seventh appearance at the Race of Champions and had previously reached the final of the Nations Cup twice and the semi-final of the individual competition on three occasions.

In 2012, victory in the Nations Cup went to Team Germany, with Sebastian Vettel (DE) and Michael Schumacher (DE), for the sixth time in a row. The individual competition was won by Formula One driver Romain Grosjean (FR), who defeated Kristensen in the final.