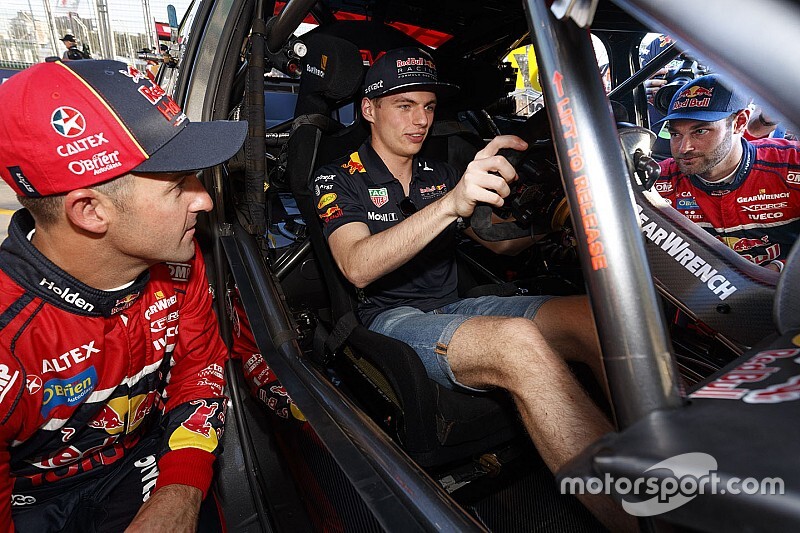 Max Verstappen and Shane van Gisbergen have engaged in some cheeky name calling ahead of the Dutchman's Supercars Eseries debut tomorrow.

The Formula 1 ace and the Supercars champ are sim racing pals, regularly competing both against and with each other in the virtual world.

With Verstappen now confirmed as a wildcard starter in a Red Bull-backed Holden on the Silverstone and Barcelona circuits this week, the Dutch megastar couldn't resist a cheeky swipe at his Kiwi mate.

In a social media video Verstappen called van Gisbergen "Pastor", a reference to ex-F1 driver Pastor Maldonado, as well as labelling him a "king shunter".

"I'll drive with a Holden in the Red Bull team with my mate Pastor," said Verstappen.

"I think we all know who that is. He's the king shunter.

Not to be outdone, van Gisbergen responded with his own video in which he welcomes "Mark" Verstappen the line-up, a call back to Mark Webber's famous "not bad for a number two driver" radio call during his Red Bull Racing days.

"You might have seen the news last night, our friend Mark Verstappen is joining us tomorrow for the Eseries, which will be awesome," said van Gisbergen.

"I'm looking forward to having him on board. We've raced a bit in the past and it's been pretty awesome.

"Mark is pretty quick. Our first race is at Silverstone. I don't know if Jamie [Whincup] is joining us this week, I haven't heard from him yet, but Mark will slot in pretty good at Silverstone as a number two driver.

"He calls me Pastor as a little nickname, probably because I crash a lot. It's pretty fitting. But he forgets that the second race is at Barcelona, which is where Pastor won..."

Qualifying for the second round of the Eseries kicks off at 6pm AEST, with race coverage starting at 7pm.

Every round of the BP Supercars All Stars Eseries can be streamed live and free on Motorsport.tv.