By:
Rich Hutson
, Presenter
Listen to this article

The relationship between Ferrari and Thrustmaster harks all the way back to 1999, and they’ve produced a plethora of licensed products in their time, but I don’t think any of them compare to this.

The SF1000 is a replica of the 2020 wheel used in Ferrari’s real Formula 1 cars, this design swinging slightly more towards how Charles Leclerc likes his layout. Every button here is mappable – apart from a few that have specific functions that we’ll get to – and it does have a pre-programmed layout for PC, PlayStation and Xbox straight out of the box.

Though I would check the manual for these layouts as the wheel itself doesn’t give you much in terms of which buttons are 'accept', 'back' and 'talk to Jeff'...

The wheel itself is constructed from carbon fibre, aluminium, very sturdy plastic and has ergonomic rubber grips, so whether you’re racing with gloves or playing in the nude, you’re going to be incredibly comfortable.

The buttons do require a fair amount of force to actuate, but they feature tactile feedback. The dials are incredibly satisfying to use, some of which can also be pressed, and these rotary switches aren’t just for show – they default to changing your fuel mix and front brake bias by default.

On the rear, you have two analogue paddles which have a plethora of mappings that can be changed on the fly using this central dial. Out of the box, it’s set to your gas and brake pedals, so if you’ve not got pedals handy or you’re a gamer with disabilities, this wheel allows for full control of your car using only your hands. I gave it a go, and it feels surprisingly good. Manual gearing at the same time is a bit finicky, but it does work. 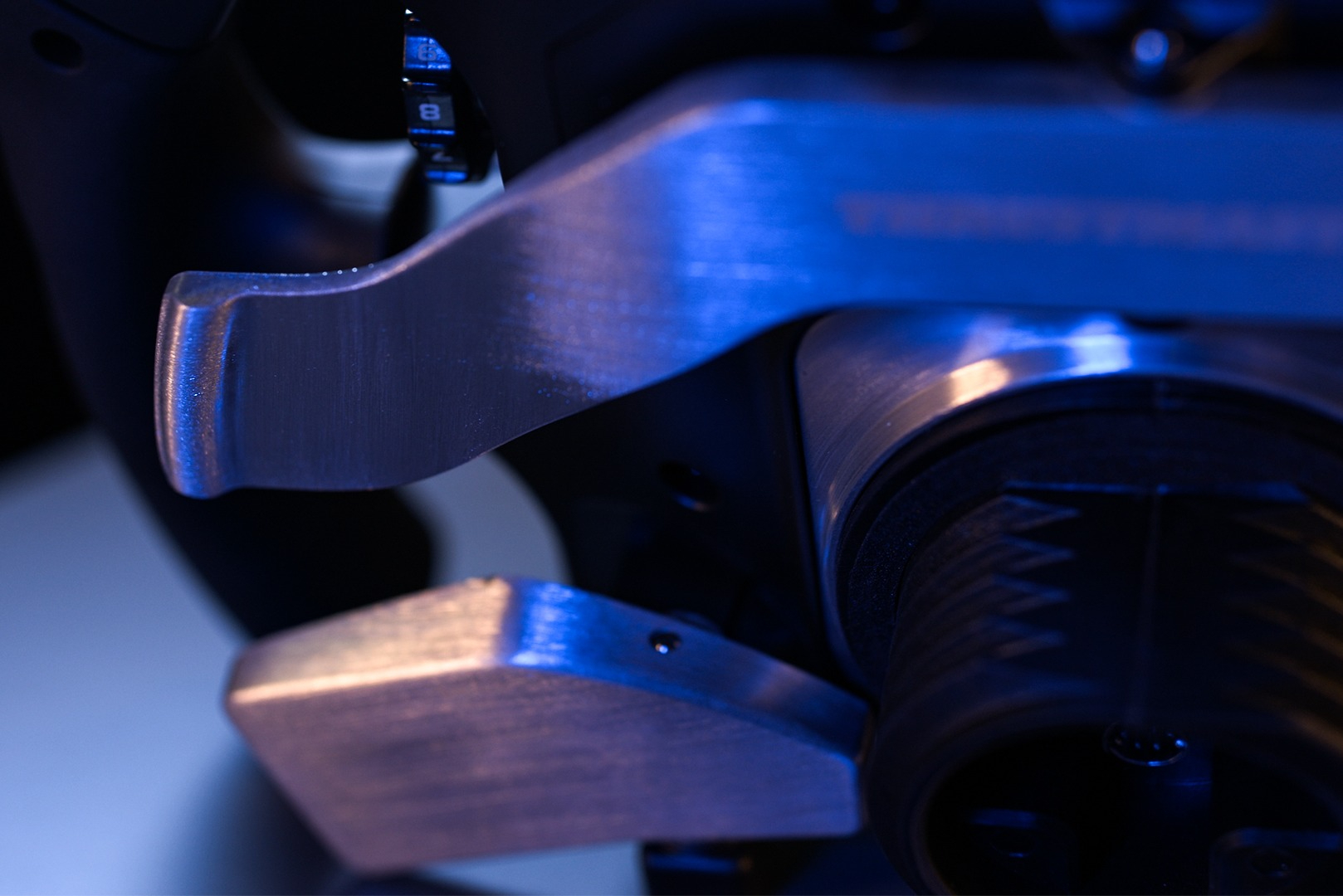 Speaking of gearing and remaining on the rear, the SF1000 has interchangeable paddle shifters, with the included set featuring a push-pull magnetic operation. They’re solid and precise, if not a little clunky in their actuation, but that’s where the T-Chrono paddles come in.

Sold separately, these feature the same fantastic machined aluminium build quality, but with switches that are faster, crisper and more satisfying to the ear. They also feature a bounce time of fewer than five milliseconds. I prefer these over the stock ones, but you will have to fork out an extra £54.99 / $69.99 / €59.99 for them. Worth it.

Okay, I’ve kept you waiting long enough, let’s talk about that display aka the pièce de résistance. The 4.3” full-colour LCD is what you’ve always dreamed of having slapped in the middle of your sim rig.

F1 2020 has native integration with this wheel, using the top-most LEDs for revs, the LEDs on either side of the display for marshal flags, and the screen itself for everything else. Gears, lap times, the vast majority of what the in-game MFD can show, it really is a spectacular bit of kit.

If you’re not playing F1 2020 however, you’re not in luck – yet. It is still relatively early days for this rim, and there’s not all that many out in the wild, so support beyond F1 is barren at present.

While you can still use the wheel with all its mappable buttons on pretty much any title that supports a wheel, the display won’t do much apart from fade between the Ferrari and Thrustmaster logos or be switched off entirely using an incredibly gratifying switch.

We’ll have to wait on Thrustmaster and various developers to get on board with this wheel, but at least the F1 integration is glorious which is why, I assume, you’re buying this rim in the first place.

The Prancing Horse-laden dial slap-bang in the middle of the wheel, plus the dials on either side, are used to navigate the display. You can check the firmware versions of the wheel and base you’re using, change the brightness of the LEDs and display, connect Wi-Fi and enable UDP telemetry, plus, once in-game, choose which skin you wish to use for your data.

After booting F1 2020, you’ll also get an extra skin to choose from, which also includes most of the fancy graphics you will usually see on the MFD in-game.

That’s the operative word. ‘Most’. Checking if your car is damaged, the temperature of the tyres and the state of the power unit can be done through both the MFD and wheel display, but the extra features that UI element has, such as changing your brake bias, fuel mix etc, as well as your radio commands, don’t show up on this screen.

So, if you were wanting to really use the display to its full advantage, you should turn off the UI element on-screen, so you’re forced to use the wheel display. But then what about those bits you can’t see on the wheel? Ah well, Codemasters has thought of that, and they still come up on the screen when using the MFD and Radio buttons. Neat. 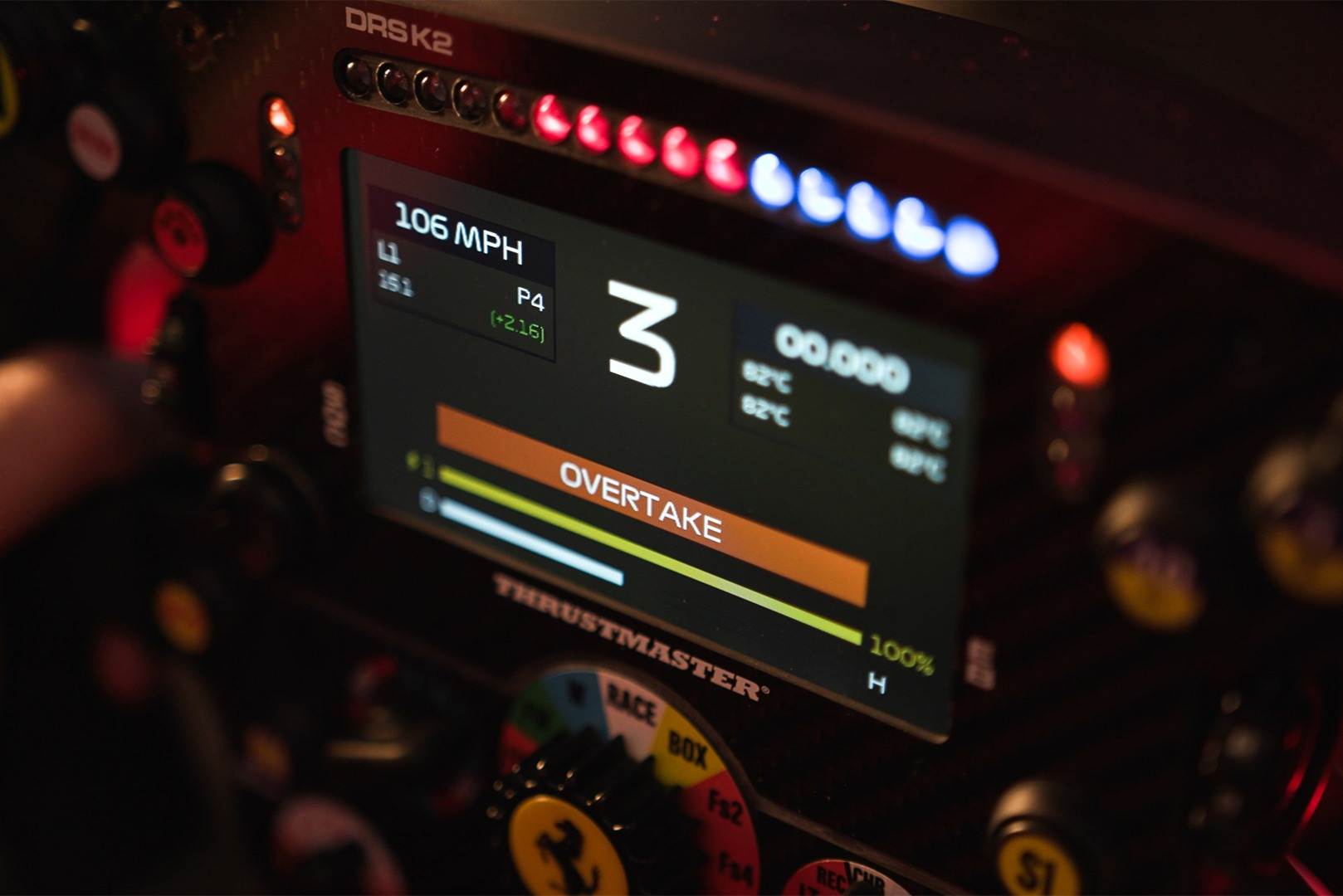 Perhaps F1 2021 might allow all this information to end up on the display. As said, it is early days for support on this wheel. But if you’re not going to go through the whole rigmarole of turning the UI bits off, how much will you use this screen?

You would need to adjust your rig to have it properly in your face like an F1 driver would, which you probably won’t be able to do on your desk. But, if you have an F1-style seating set-up, from the likes of Playseat for example, you will see more benefit from this design.

The display is a little bit gimmicky and is quite the spectacle when you put it on show, though it is incredibly functional if you choose to use it properly. F1 esports drivers might be very keen on something like this. Or just people who like things that look incredibly cool.

So that brings us round to the burning question: the price. How much does the wheel cost? Bear in mind this is only the rim, the base or pedals to go with it are separate costs. The SF1000 goes for £329.99 / $349.99 / €349.99, and seeing as it’s incredibly well built, a stunning replica of a real F1 wheel, features a plethora of bells, whistles, and customisation options, plus has a lot of potential as more developers add support, you’re definitely getting your money’s worth. 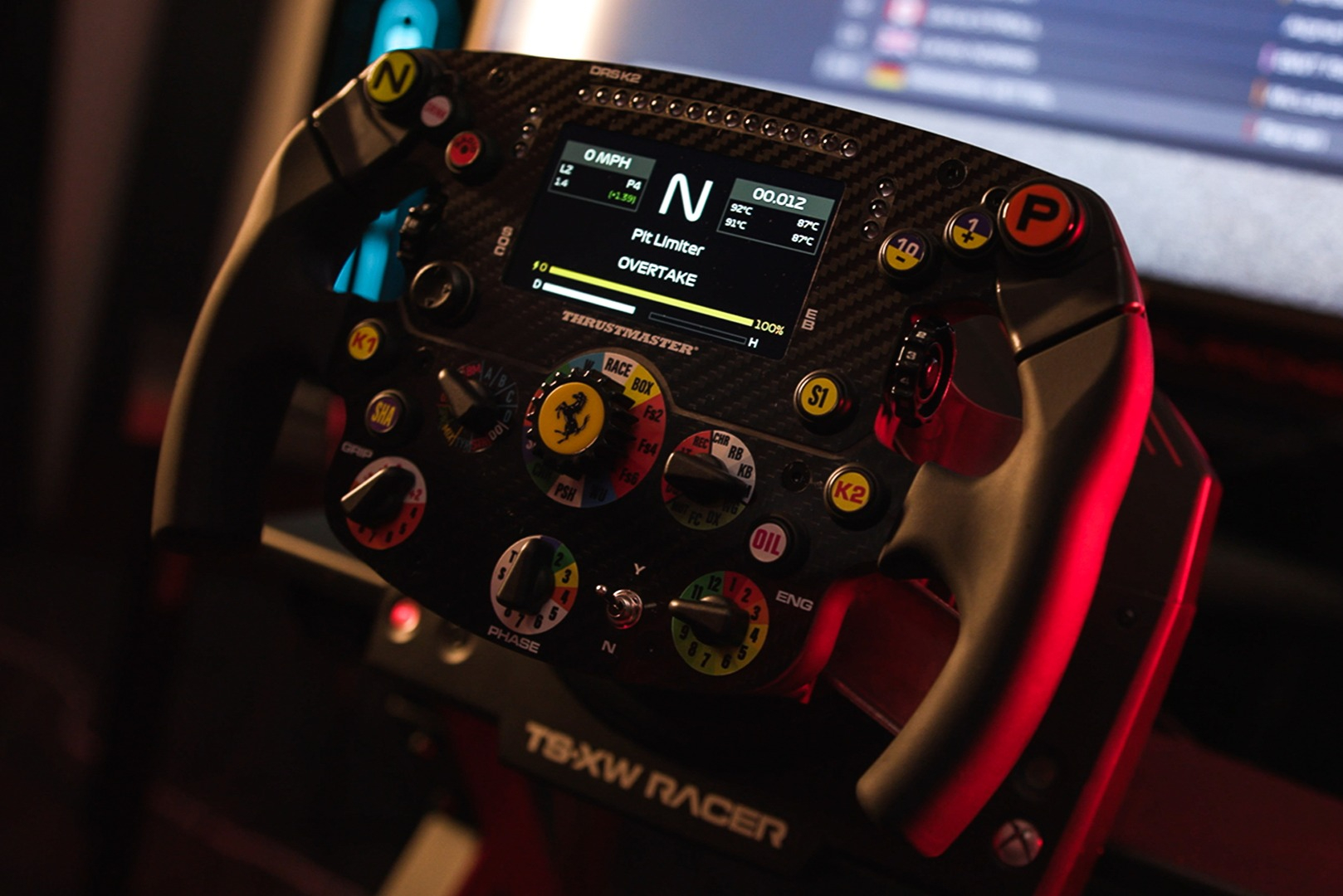 While it’s quite bewildering to use at first (as I said, read the manual), the SF1000 is the perfect cherry atop an F1 enthusiast’s dream racing rig. It feels incredible to use, looks phenomenal and achieves what it set out to do.

More importantly, it makes you feel as if you’re behind the wheel of a real Ferrari F1 car. It looks so convincing when it’s off the rig, you would be forgiven for thinking I nipped to the Silverstone pits and pinched this off Charles…

Full disclosure: A wheel was provided by the manufacturer for review purposes.