As cool as Jarno Opmeer likes to portray himself, there must have been a lot running through his mind as a second F1 Esports Series Pro title hung in the balance.

A dramatic race at Imola had effectively ruled underdog Lucas Blakeley out of championship contention. Mexico confirmed this possibility as fact.

Now, with the Teams’ championship wrapped up for Mercedes-Benz AMG Petronas Esports, all that stood between Opmeer and his second consecutive title was the ever-present force of Frederick Rasmussen. Unfortunately for the Dane, Interlagos was up next. If ever there was a bogey circuit for him, this was it.

It wasn’t exactly last place as in 2020, but Rasmussen’s fears were realised as Q3 ended with him propping up the top ten. Three and a half tenths faster than him was Nicolas Longuet whose rather mixed-bag 2021 season at least showed glimmers of a promising conclusion.

Marcel Kiefer’s inconsistency was arguably key in Red Bull losing its Teams’ dominance with second on the grid here a little too late. The same could be said of Blakeley who at least was showing up strong to confirm Aston Martin’s place in the top three.

Opmeer needed a horror result to throw away the title from this position. The Dutchman placed fourth for the start.

On soft compound tyres, Longuet broke away early following a great launch and didn’t look back. The Frenchman had the previous form around the Brazilian track having scored his last race win here a year ago.

The only other driver starting on softs was Álvaro Carretón. His season had started so well only to mire down in mediocrity. The Spaniard blazed past a cautious Opmeer at the end of the second lap. This would be nothing compared to the following lap where Williams, assisted by DRS, overtook both Blakeley and Kiefer to secure second at a crucial stage of his race. 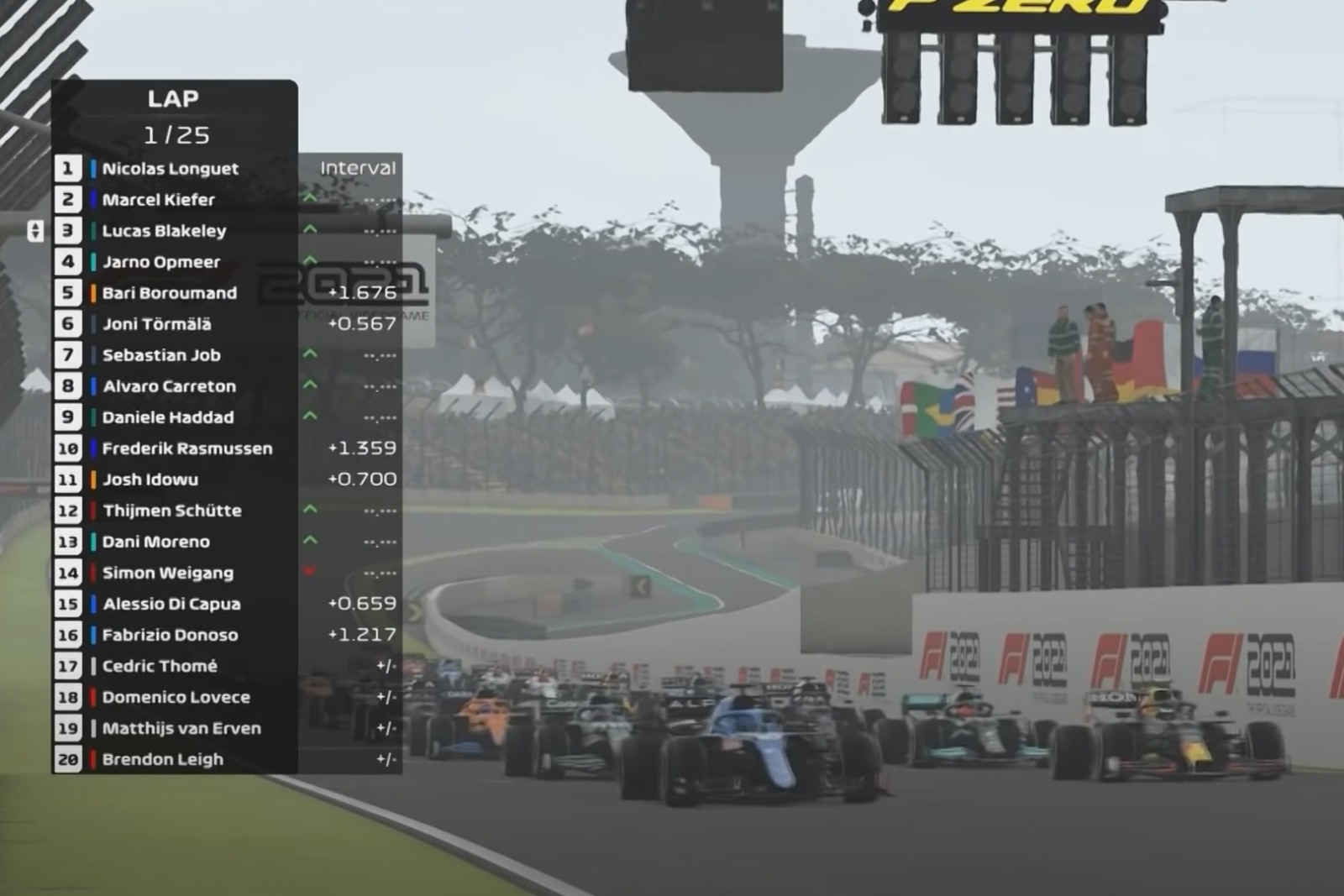 Following four very early pitstops, the quartet of Longuet, Kiefer, Blakeley and Sebastian Job all grabbed new boots for Lap 9 onward. The next group would contain Opmeer and although he initially seemed to have lost some track position, he also had the benefit of more tyre life left to utilise.

Rasmussen on the other hand recognised that risk had to be taken. A 21-point deficit meant that it was essentially win or bust.

Having picked up a time penalty and made a mistake elsewhere, the Alfa Romeo was so offset from the long runners that net leader Longuet was right behind. For two entire laps, the Frenchman was simply unable to overtake until finally he, Kiefer and Blakeley muscled their way through into the Senna-S. At this moment, all of those who hadn’t pitted did so. Except for one man.

Rasmussen’s in-car opinion had been overruled by his race engineer and this would ultimately become one of the best tactical calls of the season. Not only had Weigang held the pack up, but Kiefer struck at the perfect time to hold up Longuet’s progress. Exiting the pits with ten laps remaining, Red Bull’s ever-present driver had a chance to affect the outcome of the race.

Kiefer’s Sergio Perez impression, by the time he was demoted from lead duties by Blakeley and Longuet, had allowed Rasmussen to climb six places over two laps. Then Longuet, in frustration, picked up a time penalty effectively ruling him out of the win. As Kiefer was forced wide by an eager Job, when rejoining the German expertly placed his car for the inside kerb of Ferradura blocking Opmeer and allowing Rasmussen to swing around the outside. 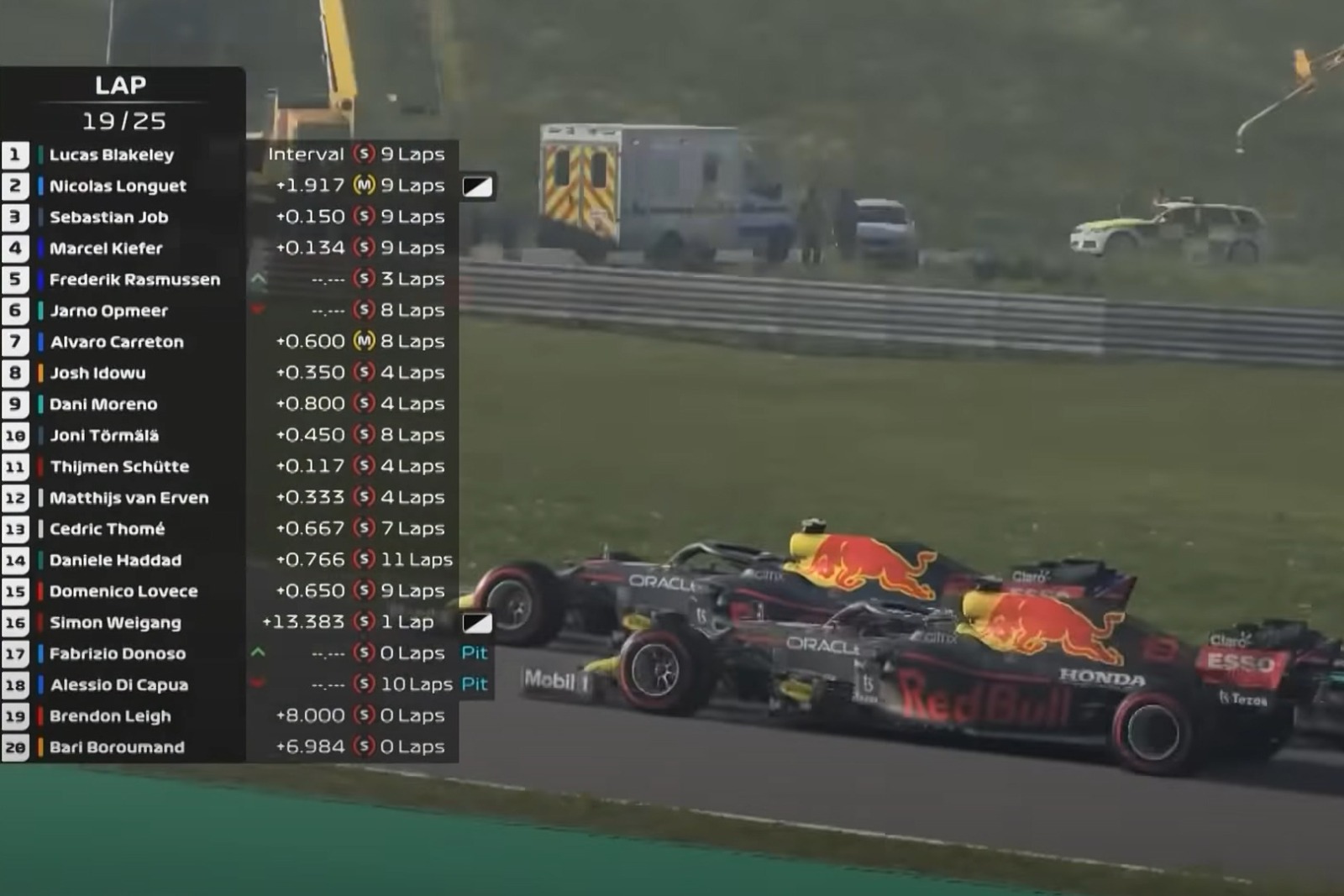 With the dawn of Lap 20 dawn came second position for Rasmussen, who didn’t find much fight in Job knowing a maiden podium would be his should he remain in fourth. With Job keeping Opmeer behind, the daring Dane charged down Blakeley and heading onto the final lap took the lead of the race with ease.

Despite cruising to one of his most impressive wins, however, it wasn’t enough to stop Opmeer from matching Brendon Leigh’s achievement of two consecutive Drivers’ titles.

Also of major historical note was, after post-race stewarding applied, both Haas drivers scored to ensure that they didn’t become the first driver lineup to not pick up a single point in an F1 Esports Series Pro season.