Motorsport Manager review: Worth the wait? 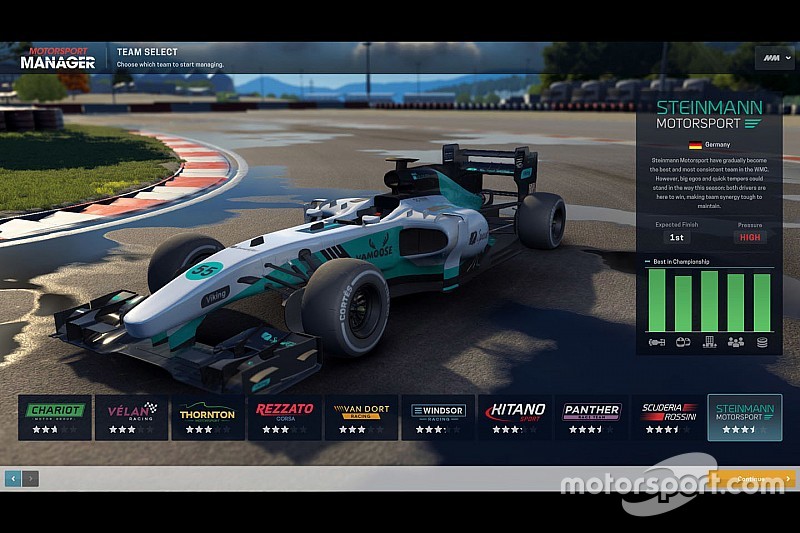 Born out of an app game, with no licenses to speak of and belonging to a niche, hibernating genre, Motorsport Manager has nonetheless captured the attention of a big-name publisher and the relevant audience. But did it stick the landing?

For this author, the announcement in May that big-name video game publisher SEGA would lend its backing to a fully-fledged motorsport management game for PC was genuinely one of the most exciting developments in the genre – if not the industry as a whole – in quite some time.

The project was seemingly made possible by the developer Playsport's previous attempt at a sports management title - an app game of the same name that was genuinely very good for what it was. And while a full-on PC sim is a different ballgame, in SEGA the developer now had a publisher that oversees the seminal Football Manager series - a revered, immensely popular example of the same genre.

If this wasn't a match made in heaven, it wasn't far off. But that, of course, is no guarantee of quality – and those interested in the game would've waited with bated breath as the game finally arrived at its November release date.

Now that it's here, excitement turns to relief. Motorsport Manager isn't perfect by any means, but it's certainly worthwhile – and, for the SEGA-Playsport partnership's first large-scale attempt at a concept this complicated, it's a remarkable success.

If you have some experience with Football Manager, its motorsport counterpart will feel immediately familiar upon boot-up, and that's not a bad thing at all.

For the off-track parts of the gameplay, this is a sleek, appealing game that manages to look better – and be a fair bit more intuitive – than many of its fellow "spreadsheet simulators".

In some ways, that does come at a price, as when assembling the data to make a crucial management decision, you might have to make a few more clicks than expected, and the statistical readouts aren't as in-depth as they could have been.

On-track, likewise, it looks pretty great. The circuits, obviously inspired by some famous real-life counterparts, are very distinctive, and the whole picture is unusually high-detail by genre standards.

Because of the overhead view, the racing does lack a real sense of speed, even when you manually speed it up. And the cars all look way too stable in how they get around the circuit, as if they were slot cars that have developed a supernatural ability to completely miss the apex. Bear this in mind though - Football Manager took years and years to get its game engine to a presentable level, and Motorsport Manager already looks better.

Is it accessible? Well, to be truthful, even for gamers familiar with a genre, Motorsport Manager could feel a little daunting at first. There is a fair bit to get to grips with, and the tutorial could probably serve to be a standalone mode spanning several races and walking the player through every major scenario in detail, rather than just being built into the main mode of the game.

Immediately as the acclimatisation period is over, however, is when the game is at its absolute best. Given how restrictive licensed motorsport titles are these days, the freedom of choice in this feels genuinely exhilarating.

If you're aimed at improving your team's competitiveness, you can go about that in a number of ways – getting the best possible drivers, the quickest car or the most reliable car... or just giving yourself the most advantage possible through politicking.

It is worth mentioning that some will probably find the team management options limited compared to some of the other sports sims. After all, you juggle an organisation of more than 50 unique staff members in FM, but here your choices are down to the driver line-up (plus reserve), the chief engineer and the two race mechanics. Hopefully some more roles will be added in future installments, but for now it feels like enough.

After all, this is not just a motorsport team tycoon, but an attempt at simulating a motorsport world, in which you are a character. In fact, if your whole goal for the game is to move your character up the ranks and do as well as possible for yourself and nobody else, that's a viable approach, too.

Three championships is not a lot, and the lack of circuit racing categories outside of single-seaters is felt, if completely understandable. At the same time, the tier system does manage to create tangible differences in gameplay – whereas the lower leagues are a lot more random and unpredictable, the WMS leans towards dominance and familiar outcomes.

The weekend structure of Motorsport Manager is made up of practice on Friday, qualifying on Saturday qualifying (if there isn't a different grid-setting rule in place) and going racing on Sunday.

The balance, however, is a little unorthodox. While in real life there's usually a fair bit more of practising than race action, the Friday session as represented in the game is short, cruelly so at the lowers tier, usually forcing you to pick between one long run or a few stop-and-go runs in an attempt to find a suitable set-up.

But the time limitations make working out the set-up a genuinely fun experience. For each weekend, the set-up guidelines you are given are very broad. And even when the drivers venture out for an exploratory run with their (usually terrible) first set-up, their feedback can be a little obtuse – on-track, they give random radio messages about set-up direction that are occasionally completely wrong, while back in the pits the only offer an evaluation of set-up quality, not so much direction.

In other words, it's trial and error. But that doesn't mean it's not entertaining – with two cars and a methodical approach, you're guaranteed to get it right enough, and seeing the drivers' assessment of the set-up turn from negative to positive is very rewarding.

Qualifying, on the other hand, is a bit strange. It's a standard format and a standard length, but the game also tasks you with managing the warm-up lap hands-on, by modulating the speed of your driver to get temperature into brakes and tyres.

It's not a terrible feature per se, but it is a little unusual for a management game, and would fit better as an optional extra.

Finally, the races themselves are stellar. They're exciting, often dramatic, with weather playing a big part and a large variety of strategic options even when the conditions stay the same.

The race engine does need some work – drivers seem to drop and gain unreasonable amounts of time in wheel-to-wheel action, especially when navigating lapped traffic, and while contact is pretty frequent, actual crashes are borderline extinct, with most retirements triggered by mechanical failures.

The racing is also somewhat overcomplicated by the fact the game doesn't really provide lap-by-lap data on all the various things you have to monitor, meaning that you will have to eyeball tyre wear and fuel consumption deltas – and often do complete guesswork in terms of tyre compound behaviour, because unless you do practice with a pen and paper and full 100 percent undivided attention on one car, you won't have a clear picture.

It borders on being too much work to maximise your odds and understanding of the conditions for a given weekend – but at the same time, it's not at all impossible to enjoy the process and get good results without making a monumental effort.

Motorsport Manager is at an obvious disadvantage against certain other sports games and even other racing games because it is not attached to a real-life championship.

Of course, there is genuinely nothing Playsport or SEGA or anyone else can currently do about that. A management game needs to depict its subjects changing and evolving, and the championship this game is clearly inspired by would currently never allow such a broad license.

For some reason, while Real Madrid sponsors wouldn't scoff at Football Manager allowing players to put Cristiano Ronaldo in Barcelona if they so desired, the idea of intra-team transfers in F1 virtual entertainment is clearly too much for the sport to handle.

But if it at all helps, the team and driver make-up of the game is clearly reminiscent of F1 – and should Motorsport Manager come up with an editor feature like the one its football counterpart has, you'll be able to fill the grid with whoever you want.

Motorsport Manager is a great game on its own merit and a roaring success for a sub-genre that seems to be waking up from a long hiatus. Its price tag may seem steep to some, but it's got enough content and variety to justify it.

I couldn't tell you if this is game that can keep someone captivated for 100+ hours the way the best games in this genre can, but I can tell you that, if there's going to be a current-age motorsport management sim that can reach that target any time soon, this could be its foundation.

There's potential for improvement, yes, but Playsport has done an admirable job with the first installment – and it will hopefully move enough copies to justify many, many follow-ups.