The opening round of the 2021 ADAC GT Masters Esports Championship kicked off this week at Motorsport Arena Oschersleben, with the wins shared between Moritz Löhner and Nikodem Wisniewski.

Raceroom Racing Experience holds within its virtual walls three huge competitions in the form of the Esports World Touring Car Cup, the Cupra E-Racing Competition and the series that turned the ignition key for its 2021 season on Tuesday evening, the ADAC GT Masters Esports Championship.

This particular arena has been ruled by Germany’s Moritz Löhner, who this year will compete under the banner of a third different team in an attempt to claim a third consecutive title. No one else has won the championship since its inception.

However, the field this year is truly titanic in nature this time around with a plethora of esports champions across multiple disciplines sticking their names into the contest.

The €100,000 prize pool is substantial and, should anyone do the unthinkable and win every single race in 2021, a real-life McLaren GT is also on the line. So with all that in mind, let’s dive into the details for the first round at Motorsport Arena Oschersleben.

The smart person’s money would always be on Löhner for pole position in the opening round and the now Dörr Esports driver proved why by taking the top spot by almost two-tenths of a second. As is becoming a common understanding across sim racing, this sort of margin should be considered huge and delivered an ominous message to the field; the two times champion wasn’t messing around. 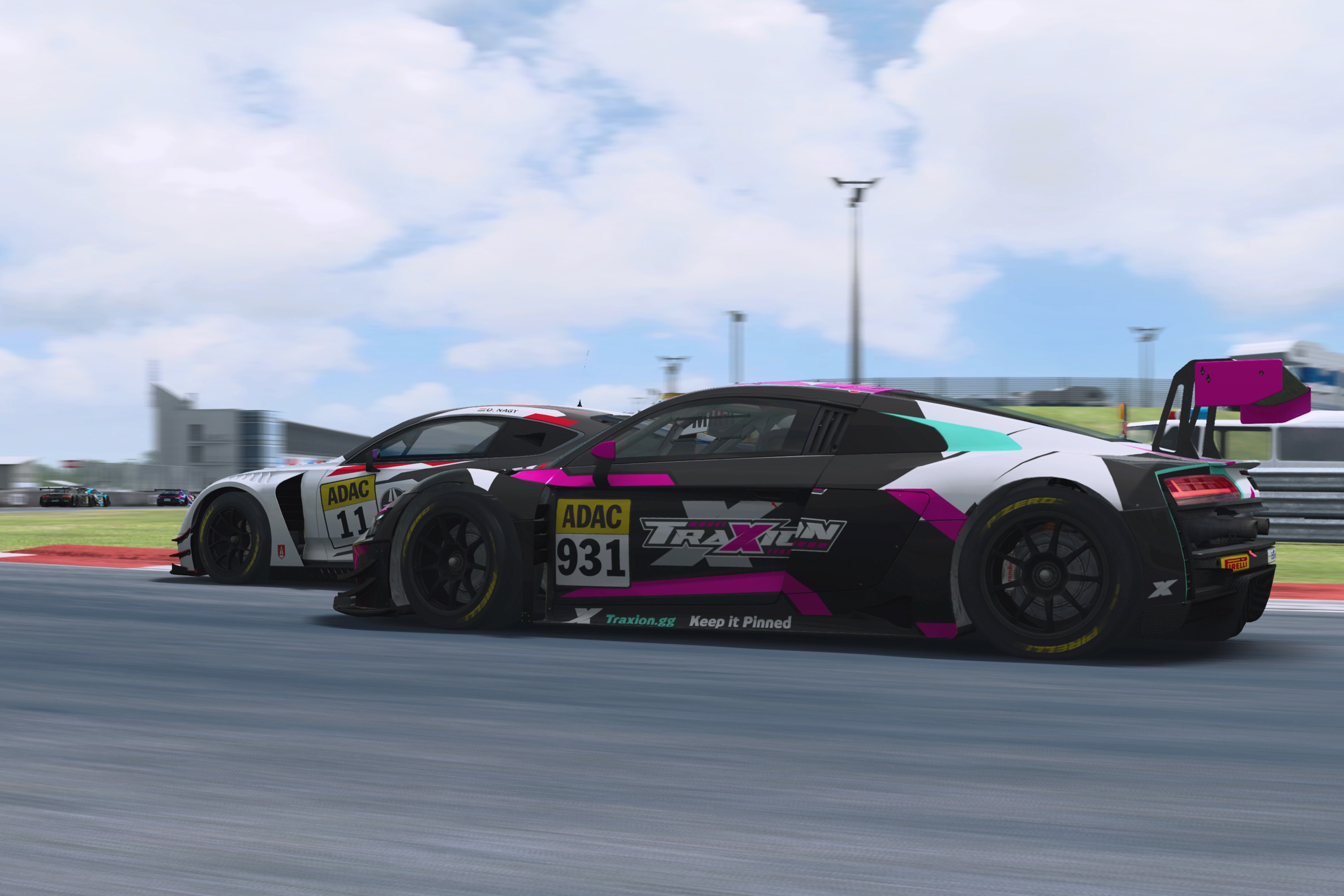 His old stomping grounds of the Mahle Racing Team still featured strongly through, as Marko Pejic would ensure an all German and all Porsche front row while Williams Esports’ Jakub Brzezinski broke the trend placing his Bentley in third. The likes of Kevin Siggy, Gergo Baldi and Jack Keithley also qualified well, as expected.

There were early troubles for some. 2020’s runner-up Néstor García could only grasp fifteenth and R8G Esports’ Erhan Jajovski, who had recently come off the back of a torrid rFactor 2 GT Pro Series, languished down in P29.

A common criticism of rolling starts is that it eliminates the jeopardy of having a poor getaway, but if you were in Pejic’s shoes as the go was given, you’d have a very different view. After such a strong qualifying performance just 10 minutes prior, he was gobbled up by the two leading Williams cars of Brzezinski and Keithley. Siggy and an eye-catching Christopher Högfeldt also managed to jump the front row starter. 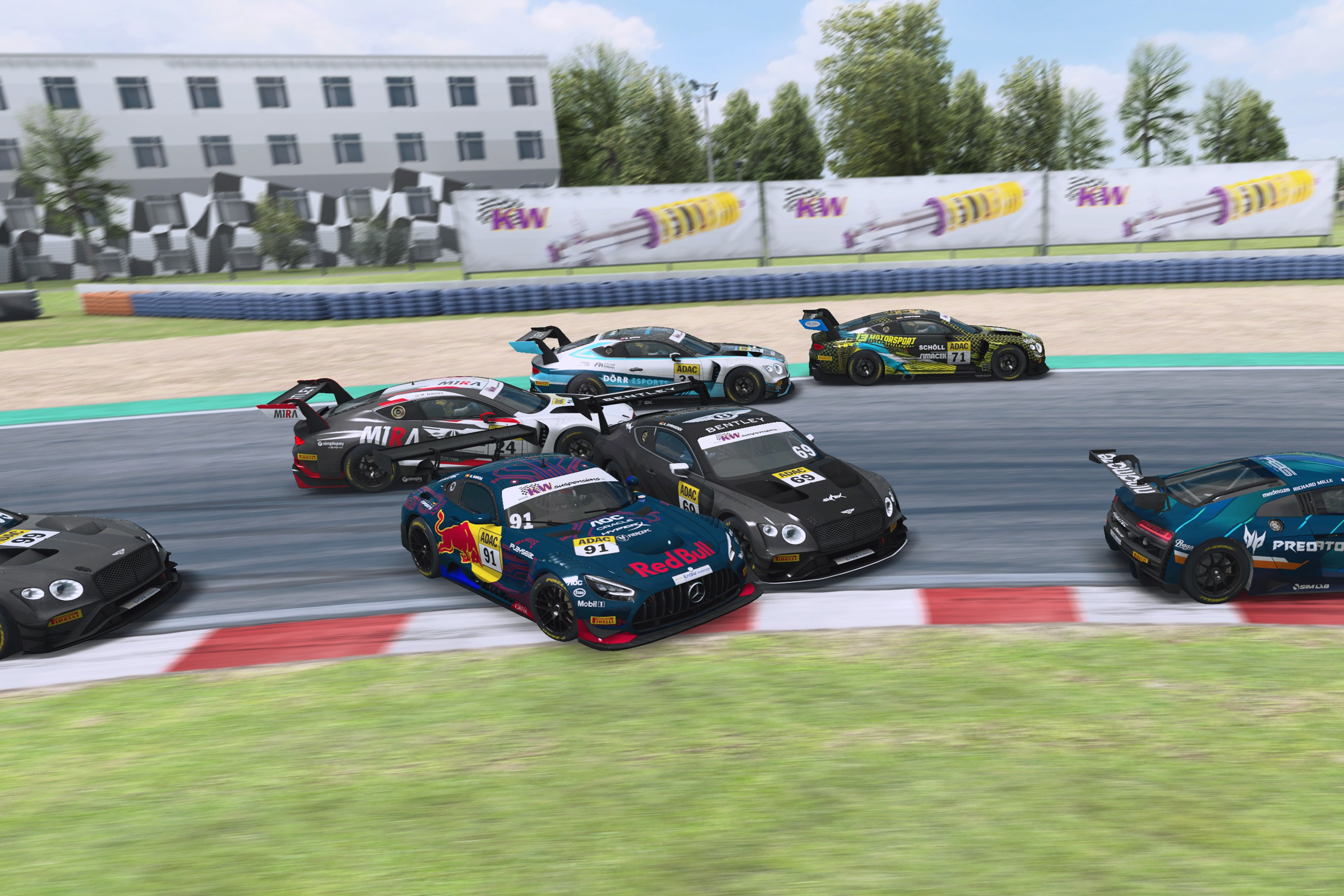 With only 20 minutes to go about your business in the Sprint Race, there’s not much time to work with. Especially around a track such as Oschersleben which has limited overtaking zones. Tim Jarschel displayed that fancy passes were possible through the Triple as Lucas Müller fell by the wayside in the battle for the top ten; this was particularly stinging with the reverse grid pole position on the line.

The pressure got to Isaac Price in the midfield who, after getting elbows out, didn’t make too many friends and paid for it going wide and lighting up the rears through the Zeppelin Curve.

Upfront, discretion was the better part of valour on this occasion as many looked to lock in their first decent points haul of the season. Löhner bagged the win quite comfortably in the end ahead of Brzezinski and Keithley. Quite extraordinary to think that this marked the double champion’s second win ever in the series, his first being the inaugural race at this very track two years ago.

Jarschel would hold onto 10th ultimately to start the Feature Race on pole. 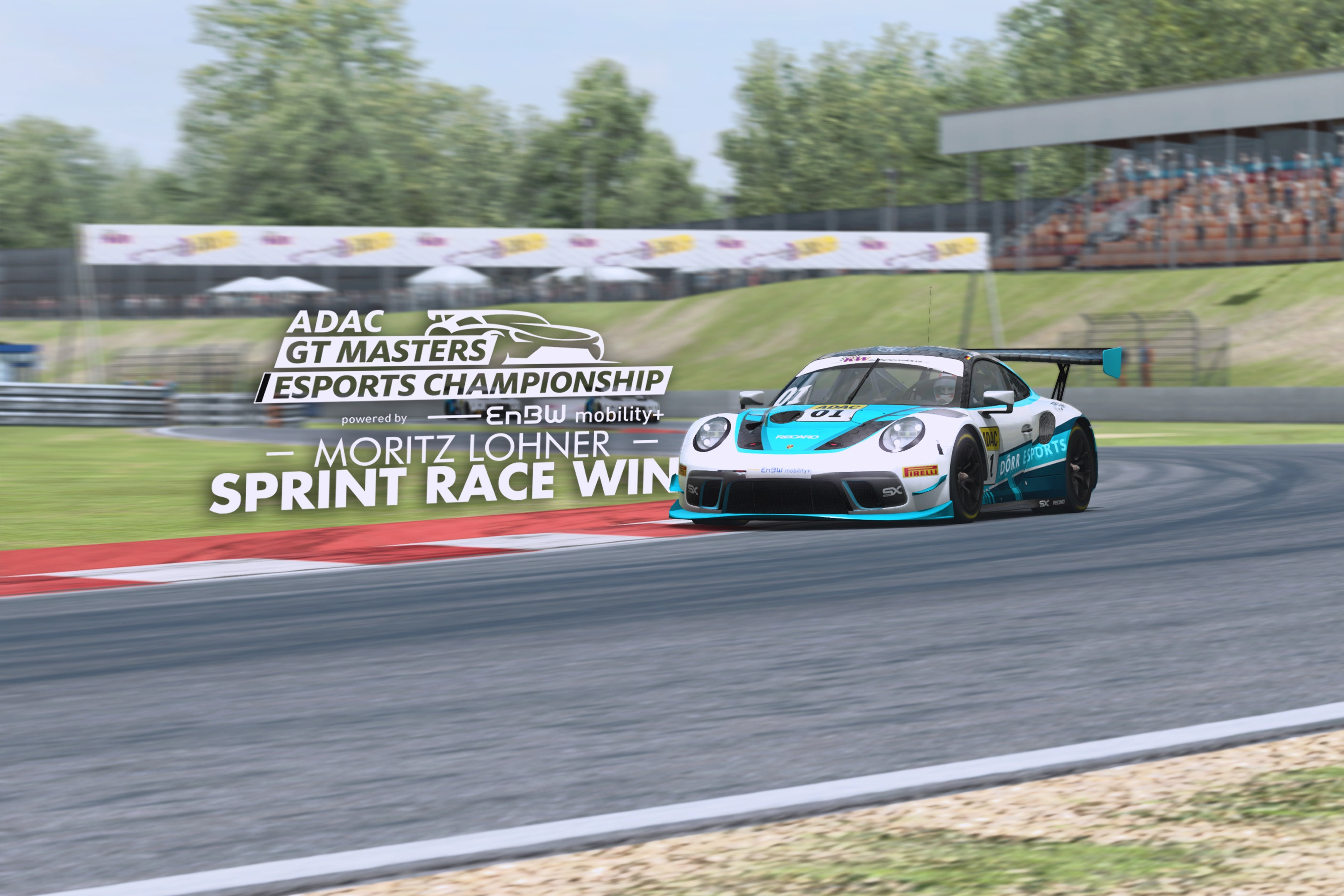 A new addition to the broadcast, the GT3-based championship now boasts a GT4-based support event at every round with spots poached by those who are fastest on an open qualifying leaderboard. Traxion.GG’s own John Munro will be testing his racing wit in these events as all vie for the grand prize of a guaranteed place on the GT3 grid for 2022.

Just because this field supports the main show, it is not to say that the GT4s don’t pack some serious talent as evidenced by qualifying with experienced Raceroom runners Emre Cihan, Julian Kunze and Risto Kappet forming the top three. The Turkish driver would convert pole position to a first win of the season. 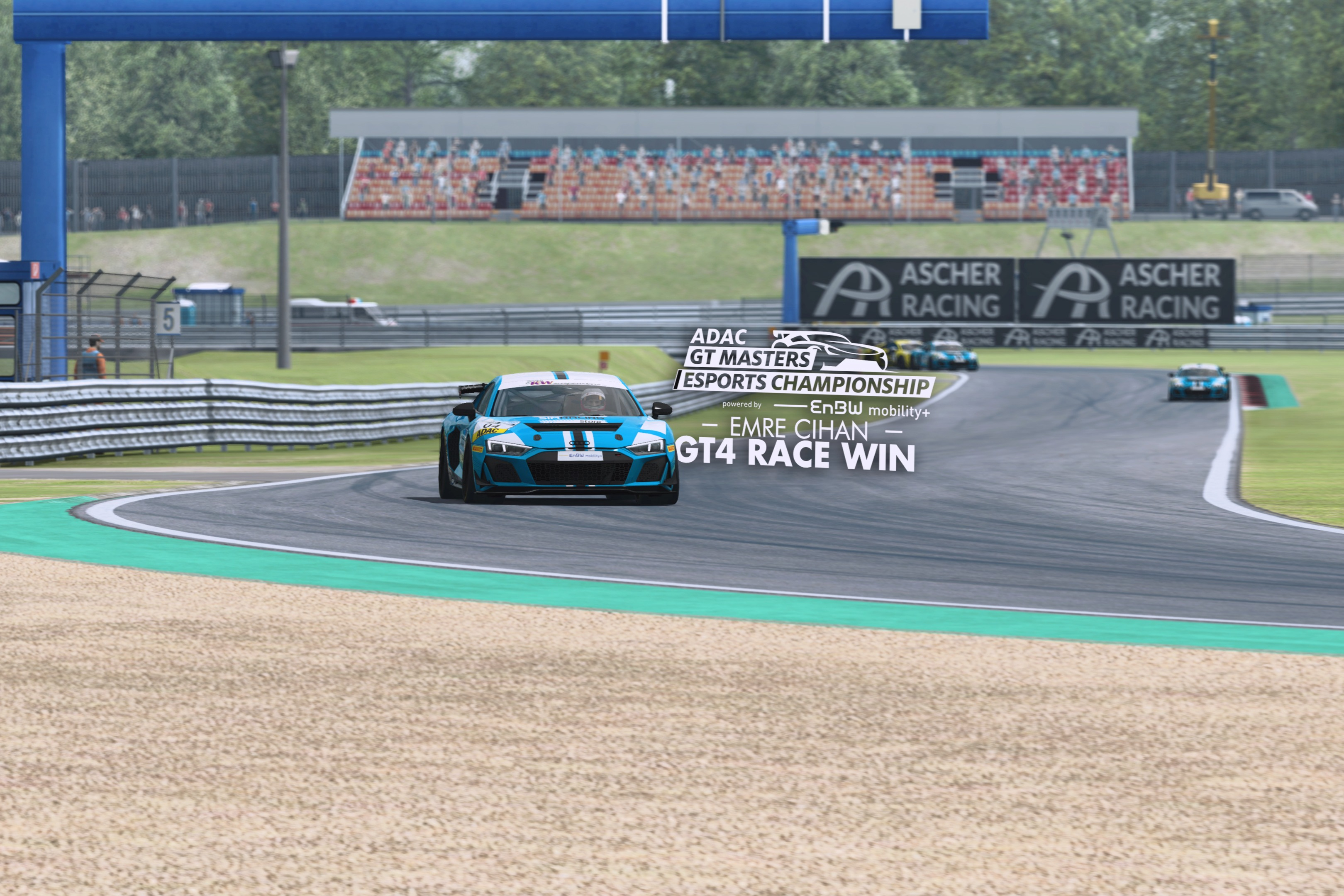 For the second consecutive race, the driver starting from second didn’t get the opening corners they were hoping for.

On this occasion, Florian Hasse (a championship contender back in 2019) was mugged by the Bentleys of Baldi and Wisniewski respectively. The German would surely be thankful that he didn’t have a launch as bad as Löhner though, with the Sprint Race winner dropping like a stone to 22nd after contact with Högfeldt; practically eliminating any hope of shooting for the elusive McLaren GT super prize. 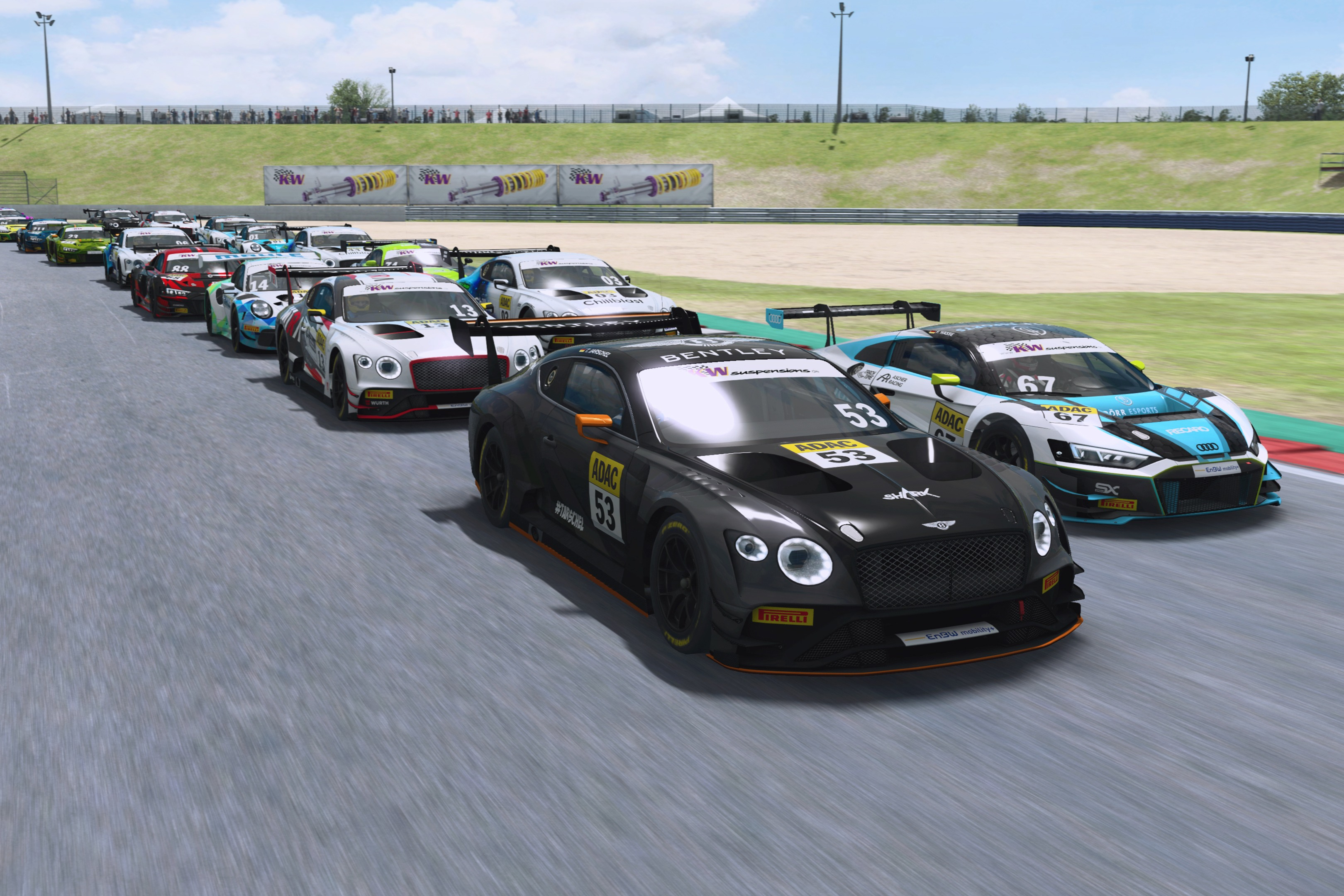 Unbelievably, things would turn out to be even worse for pole-sitter Jarschel, who was robbed of a chance to win by a desperately cruel disconnection. This would promote Baldi to race lead and Hasse back onto the podium. Eager to make up for his underwhelming Sprint Race performance, Pejic looked on now in 4th.

The Feature Race being double the length of its precursor in the evening’s entertainment brings with it the added element of a pit stop to make at some point during the race, with the pit window opening as early as eight minutes in. The favoured strategy of the front runners appeared to be stopping early on in an effort to run in clean air. Those in the fight for the top three all dipped into the pits leaving Siggy’s Audi to take the reins at the head of the field.

Pitlane times were tight, too tight for Baldi’s liking as fears crept in of being jumped by Wisniewski. This anxiousness forced the most successful eWTCR driver of all time into a rookie error, letting the throttle loose before the exit line. Thus, a speeding penalty was delivered to the Hungarian’s dashboard – a pitlane drive-thru the punishment. Wisniewski was essentially now in the clear, but for the doomed Bentley ahead of him. 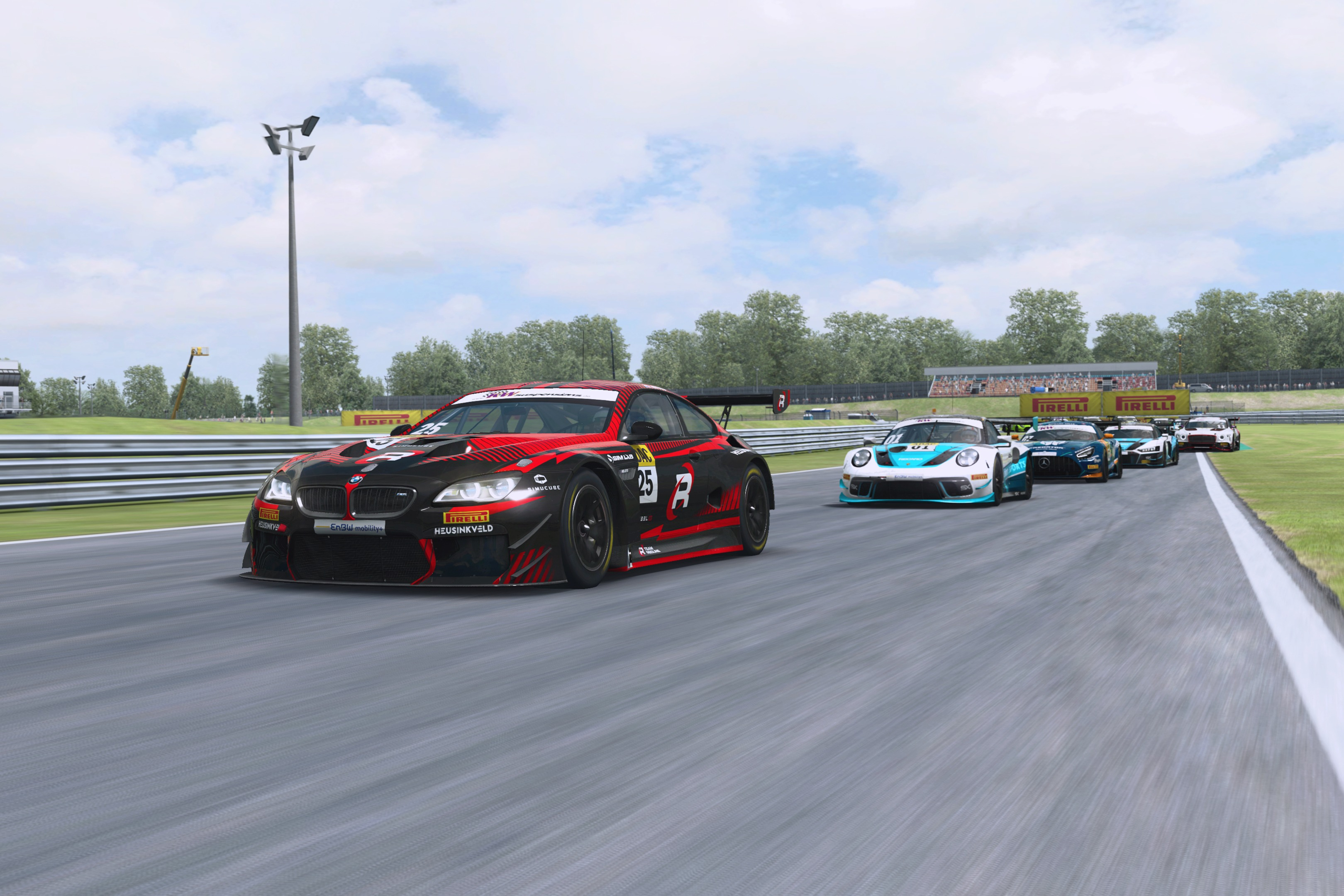 As the pitstop cycle neared completion, a clearer story formed as to who was in the battle for the win. With Keithley joining Baldi in speeding penalty misery, Wisniewski, Hasse and Pejic formed the podium places. Siggy’s middle-of-the-road stop had left him fourth overall with Brzezinski just behind.

Once again, as was much the case in the first race, as the minutes ran on a calm fell across the top ten with many seemingly content not to risk their championship charges on the first evening of racing action. The spotlight story further down was of Löhner’s recovery drive though the title favourite could only rise as high as ninth.

Thus, Wisniewski was mostly unchallenged in his drive to victory. Hasse and Pejic secured their first podiums of 2021. 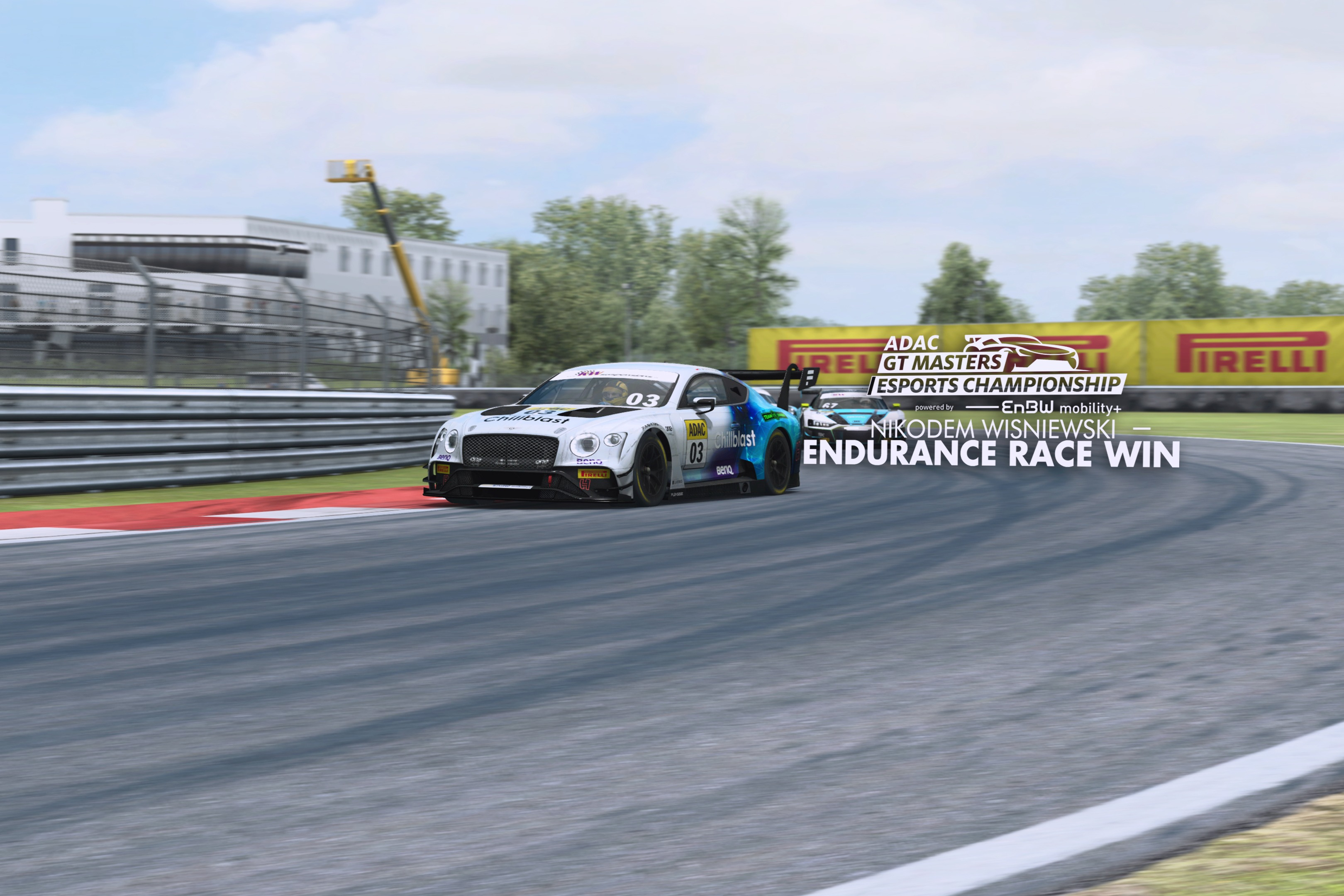 The ADAC GT Masters Esports Championship will be back in a week’s time at the Red Bull Ring. The English commentary stream will be exclusive to the Traxion.GG YouTube channel.