On Tuesday, the entry list for the 6 Hours of Spa Virtual was released, uncovering the 114 drivers that will compete on the 38 official teams this weekend.

The second race in the Le Mans Virtual Series will take place at Circuit de Spa-Francorchamps, utilizing the rFactor 2 platform.

Each team will be composed of three drivers, one of which needs to be a designated Pro, FIA graded driver. There are plenty of returning faces to the second round, but there are also a slew of new drivers that will duke it out over the six-hour event. As it will be all season, both LMP2 and GTE classes will go to battle, racing against each other, this time around the 7.004-kilometer, 4.352-mile circuit in Belgium.

There are some drivers on the entry list that weren’t announced at the time of the original roster reveal. Of course, due to other mitigating circumstances, there have been new drivers approved by the Le Mans Virtual Series committee to compete in the event. Those names have been approved and are marked on the entry list below. 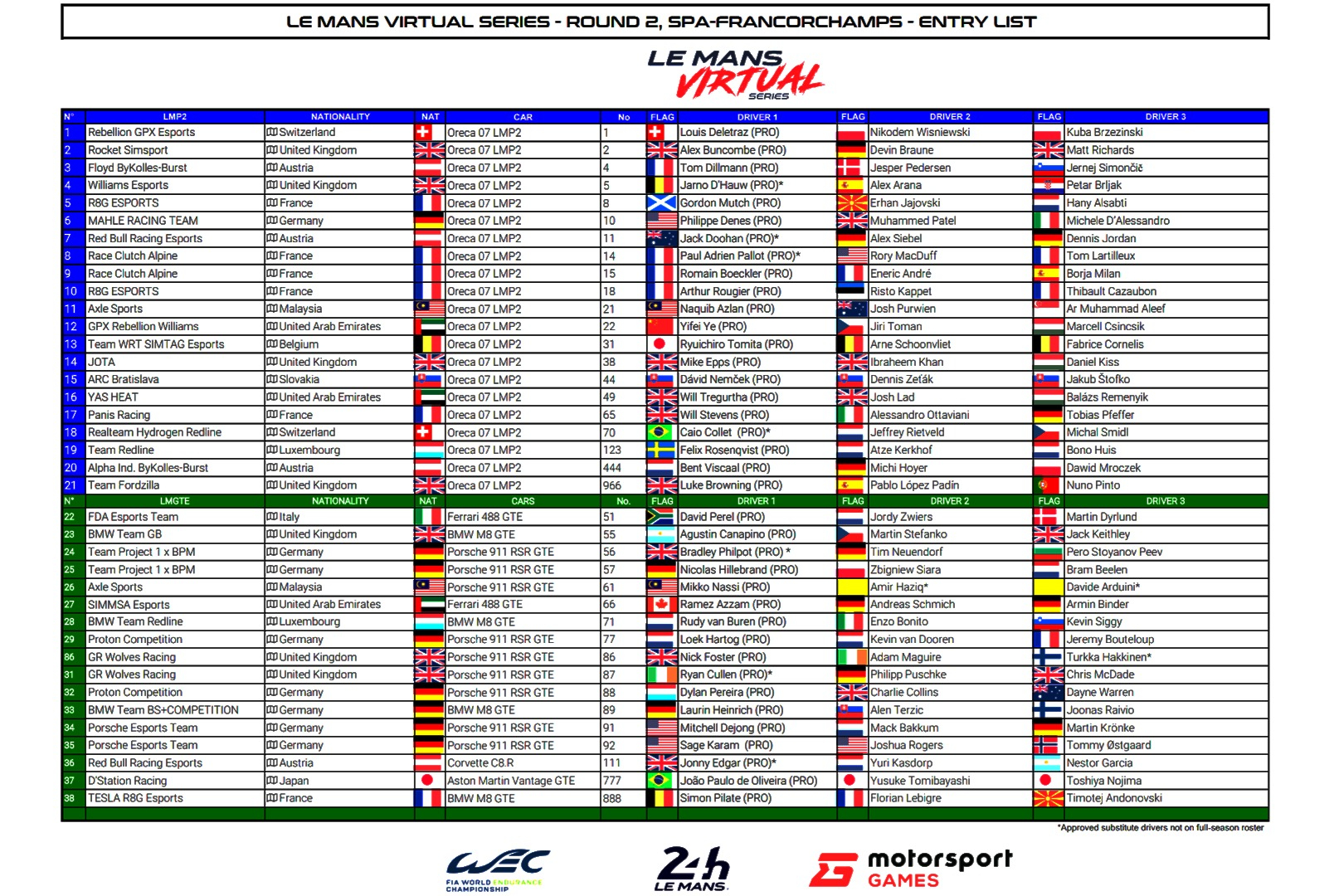 Some of the real driving talent in the LMP2 class includes NTT IndyCar’s Felix Rosenqvist, teamed with Atze Kerkhof and Bono Huis in the Team Redline No. 123, as well as FIA F3 Vice Champion Jack Doohan driving the No. 11 for Red Bull Racing Esports with Alex Siebel and Dennis Jordan. Another FIA F3 star, Caio Collet, will look to keep the Realteam Hydrogen Redline No. 70 atop the standings together with Jeffrey Rietveld and Michal Smidl.

The winning combination in the LMGTE class at Monza, the No. 91 Porsche Esports Team, will return in full with Mitchell deJong, Mack Bakkum and Martin Krönke taking turns behind the wheel. The LMGTE runner ups at Monza, the No. 71 BMW Team Redline machines, will also retain their Monza lineup with Rudy van Buren, Enzo Bonito and Kevin Siggy.

NTT IndyCar Series and recent NASCAR Xfinity Series driver Sage Karam will make his Le Mans Virtual Series debut in the other Porsche Esports Team car, the No. 92, driving with Joshua Rogers and Tommy Østgaard for the six-hour show.

Each of the teams had to submit their three selected drivers from their already announced rosters for the esports championship, as they will for each individual round. A minimum of one driver is required to be FIA graded per event unless approved otherwise. Teams signed up to five drivers for the season with a minimum of two required to be FIA graded before the season began.

It was mentioned in the press release that rFactor 2’s dynamic weather system could be in play, which could mean a realistic, unpredictable race could unfold on the Belgium circuit. Monza was relatively bright and sunny, so weather could throw a wrench into everyone’s plans.

Qualifying for the weekend show starts Friday 15th October at 6 p.m. BST (7 pm CEST, 1:00 pm ET) with the session being broadcasted live. As it was last time, the broadcast will also include the second race of the Le Mans Virtual Cup, a competition open to all rFactor 2 drivers via the rFactor 2 competition system.

The main event, the 6 Hours of Spa Virtual, will take place on Saturday 16th October, with the six-hour race starting at 12.30 pm BST (1.30 pm CEST, 7.30 am ET). All of the action will be live on the Traxion.GG YouTube and Twitch channels.