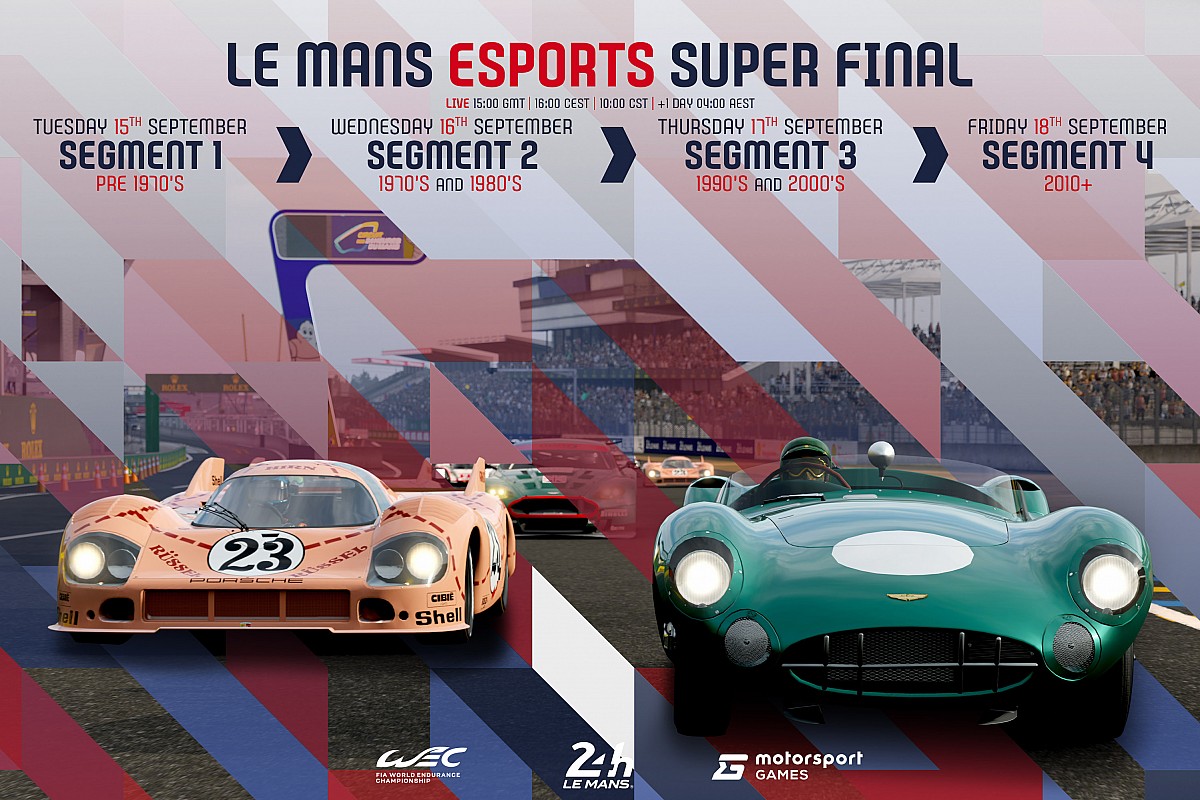 PRESS RELEASE, 4th September (10am UK): Motorsport Games, the FIA World Endurance Championship and the ACO have today unveiled the epic week of racing that will form the new Super Final of the Le Mans Esports Series as Pro and Pro-Am teams race for a share of a $150,000 prize pool.

Following the announcement that this year’s 24 Hours of Le Mans race will now be held behind closed doors, the Esports Series finals will now take place online in the week building up to the real-world race between Tuesday 15th to Friday 18th September with four nights of stunning racing ahead.

The 2020 Le Mans Esports Series Super Final follows the incredible success of the 24 Hours of Le Mans Virtual in June and last year’s final, which was won by Veloce Esports just hours before the real race took to the grid.

Teams from around the world will compete on Forza Motorsport 7, on the Xbox One family of devices, in the 2020 final. They will take place over four nights that reflect the history of the iconic endurance race. Each night will feature four hours of exhilarating racing with two one-hour sprint races and a two-hour endurance race. The two teams with the lowest points, in both the Pro and Pro-Am categories, at the end of every night will be eliminated until we go into the Super Final on Friday 18th September where the top three teams will fight it out for the title.

Gérard Neveu, CEO of the FIA World Endurance Championship and Le Mans Esports Series said: “Anyone who witnessed the 24 Hours of Le Mans Virtual in June will know that great e-racing can take place anywhere in the world, and that the world’s best sim racers can produce exciting and captivating racing no matter where they are.  Of course, we wish that we could all be together at Le Mans this June, but this is an extra-ordinary year and we will look forward instead to seeing everyone involved in the Le Mans Esports Series on site for Season 3’s finale in June 2021.”

Ben Rossiter-Turner, Head of Esports for Motorsport Games commented: “Obviously we are all disappointed to not actually be at Le Mans this year but as the 24 Hours of Le Mans Virtual proved, earlier this year, we are going to make the best of the situation. This promises to be four nights of fantastic racing that will include all the hallmarks of Le Mans such as history, endurance, skill and of course teamwork. Motorsport Games is delighted to be working with our friends at the FIA World Endurance Championship to make this a stunning event.”

Qualification for the Le Mans Esport Series finals began back in November 2019 and since then seven professional teams (Red Bull Racing Esports, Lazarus Racing, Total Performance Racing, Fast Racers Forza, Solar Vision Racing, RYZE Motorsport and Williams Esports) have earned a place in the final line up where they will be joined by wildcard entrants Veloce Esports, the reigning champions, and Wolves of Dawn – a selection of top esports drivers from teams who did not make the final. The Pro-Am teams will be randomly drafted from players who have qualified at events or through the Rivals system in Forza Motorsport 7.

The schedule of events for the 2020 Le Mans Esport Series Super Final will be:

Super Final week will be broadcast live on Motorsport.tv and streamed live on the Le Mans Esport Series Twitch, Facebook and YouTube accounts. For more information and for the full rules and regulations for the Super Final visit www.lemansesports.com