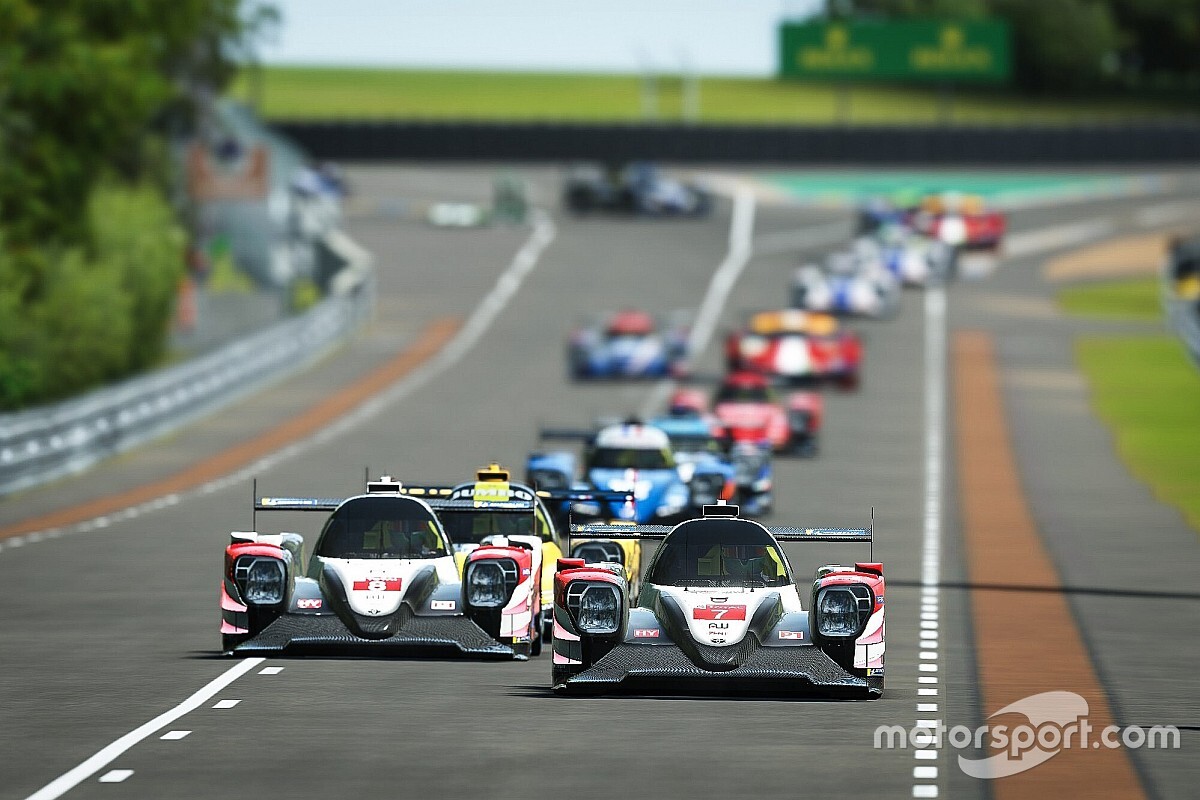 The 2020 Le Mans 24 Hours was due to take place this weekend before the coronavirus pandemic postponed it, but the virtual 24-hour race taking place instead is set to provide a star-studded line-up and just as much action

Two Formula 1 world champions, three Indy 500 victors and seven outright Le Mans 24 Hour winners. A line-up of such pedigree and accolades is usually the norm for any Le Mans 24 Hours event, and perhaps in an alternate universe those same drivers are currently in the north of France enjoying the sunshine or sheltering from the rain.

But with the COVID-19 pandemic reshaping this world - motorsport included - the French endurance classic originally scheduled for this weekend is not taking place until September.

In its place though will be the 24 Hours of Le Mans Virtual - a collaboration between the FIA World Endurance Championship, Le Mans organisers the Automobile Club de l'Ouest and Motorsport Games - and despite taking place in the virtual world, it is shaping up to be every bit as exciting as the real-life spectacle. 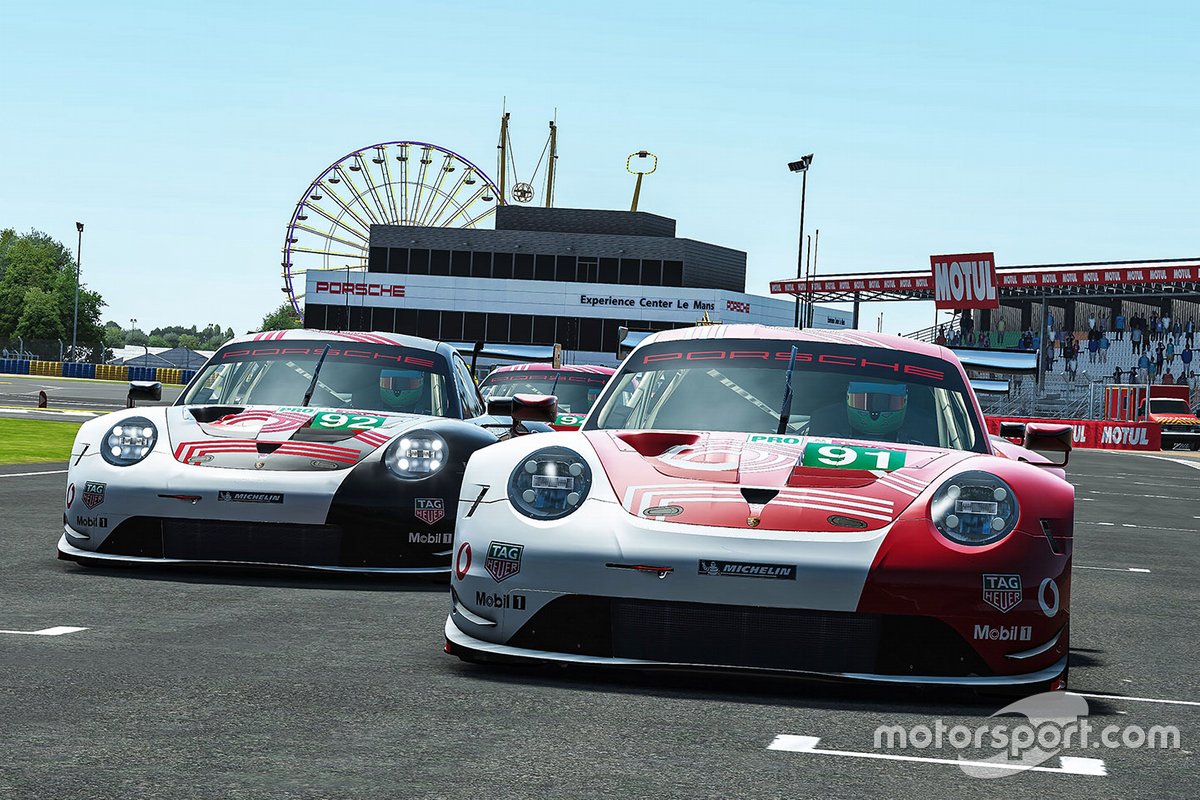 "I would say it's probably the one most people have been taking the most seriously out of all of the programmes and the races that we have been doing and using so far."

It's not just drivers that have got involved either, with manufacturers including Ferrari, Porsche and Toyota and teams such as Penske and United Autosports all taking part in the high-profile event.

The race itself will consist of 50 cars and 200 drivers using the sim racing software rFactor 2, with 30 LMP entries all using the ORECA 07 LMP2 car, while in GTE manufacturers Ferrari, Porsche, Corvette and Aston Martin will have their respective cars available for the event.

All teams must have a minimum of two real-life drivers and a maximum of two Esports/sim racers as part of its quartet, with each driver required to complete at least four hours of driving but no more than seven hours across the 24-hour period. Qualifying will take place tonight (Friday) with a 20-minute session for both the LMP and GTE classes, with the race set to begin tomorrow (Saturday) at 1400hrs BST.

While there are, and always will be, sim racing sceptics who see it as 'just another game' and gimmick, there's no question that the majority of drivers are taking the event seriously. Racing drivers are competitive human beings and the chance to win at the Circuit de la Sarthe - even a virtual one - against their contemporaries is proving to be an opportunity not to be squandered.

Former Ferrari driver and 11-time grand prix winner Barrichello will contest the event alongside two-time F1 champion Alonso and admits that both are putting in the hours ahead of the race.

"You can see why people have success [with Alonso]. He's very determined, the amount of hours he's spent on the sim these days, and he's coming up with set-ups and things like this," says the Brazilian. 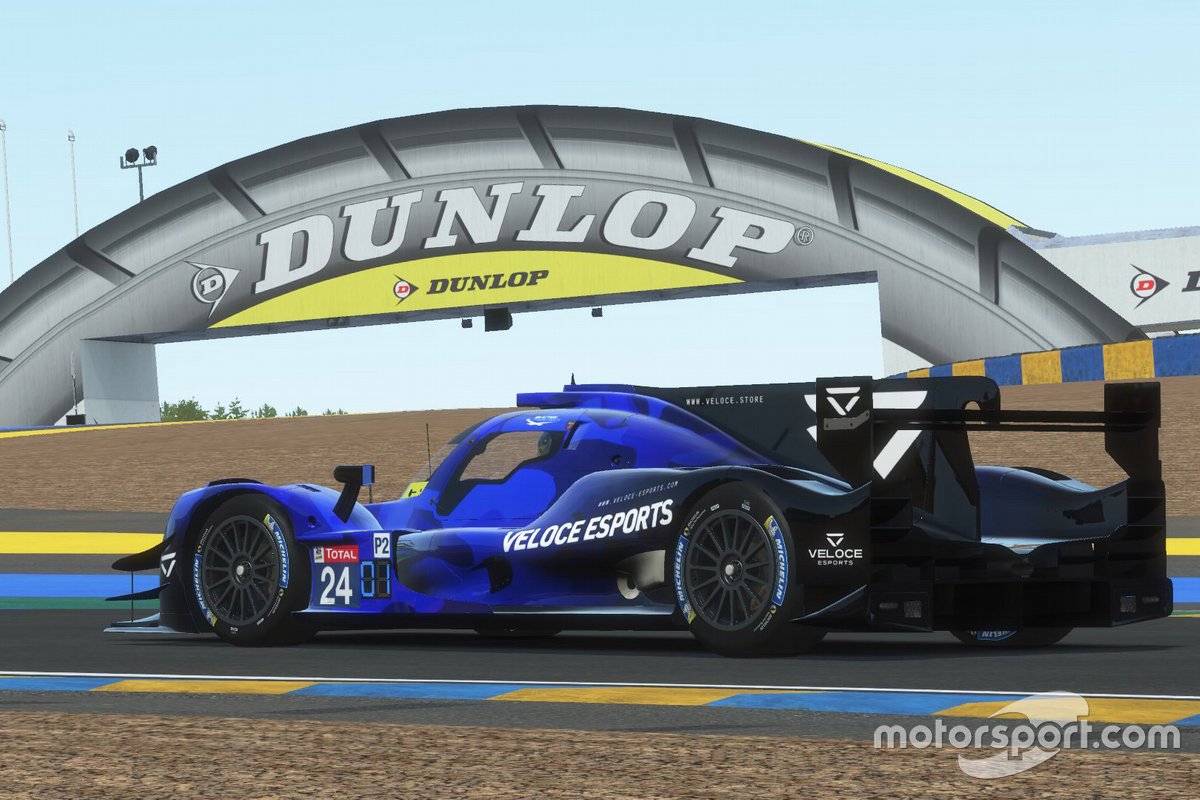 "It goes onto to say whatever he puts his hand to, he wants to win. I love the challenges that he puts up. This afternoon [last Tuesday], we have a challenge amongst us four drivers to do something specific and hit it up, it's just nice, because it keeps people motivated. We have five or six people working for us, including engineers and drivers, telemetry, organiser, PR, it's just amazing, it's just like real-life."

With it being an officially sanctioned event it will be overseen by FIA WEC race director Eduardo Freitas and a team of assistants, which means any indiscretions will be penalised and should prevent any deliberate collisions - typically a bugbear of online racing.

WEC CEO Gerard Neveu is confident that such incidents - which have marred a number of other high-profile Esports events - will be avoided and that a professional approach will be brought to the event.

"We have to be optimistic and to trust them. This is part of the game. We organise everything, but we will not drive the car in place of the drivers, and not manage the team in place of the team managers. We will provide the stage. They have to be the rock stars!"

As well as hours spent practising on the sim and fine-tuning set-ups, drivers have been working alongside their professional gaming teammates to get them up to speed. James Baldwin, 2019 World's Fastest Gamer and eROC champion, will contest the event with Veloce Esports - which has entered three teams - and has been working alongside real-world drivers including Vergne and Gasly.

"I would say the biggest challenge has been probably getting everyone on the same wavelength," he says. 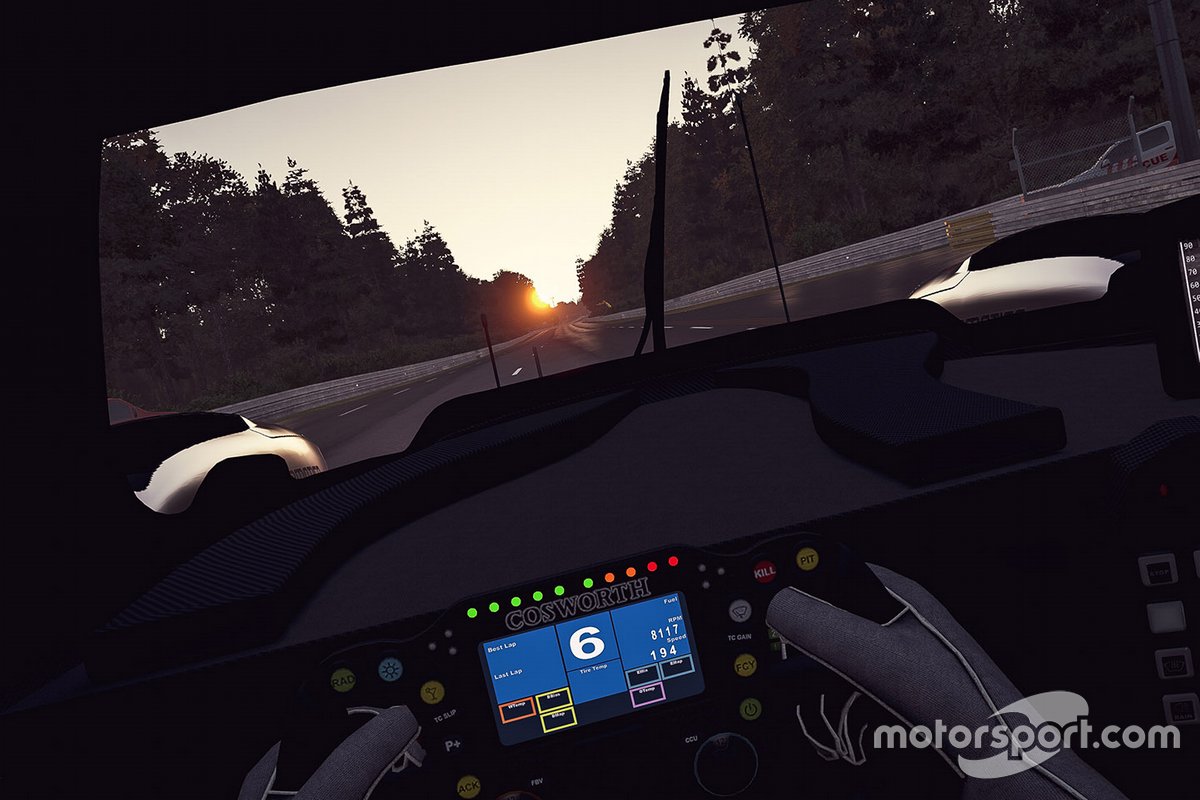 Onboard view at sunset

"The real drivers obviously have their own careers and the real-life world of motorsport is kick-starting again so they're prepping for that and to get them on the same wavelength in terms of putting in the hours us sim guys would usually put in, it's been a challenge but I think they've taken to it quite well.

"Because it's a 24-hour race one driver has a lot of responsibility, it's not like if you have a weak link they can be brushed under the carpet."

The challenges the race promises to produce are also set to be worthy of the 24-hour classic, as just like the real Le Mans, drivers will have to contend with fatigue, multi-class racing and changeable conditions. Real-life drivers who are veterans of the sim racing world such as Norris admit they expect this event to be one of the most demanding they have taken part in.

"[The] weather has been one of the most different things because it can rain on rFactor and it doesn't rain on many other programmes," says Norris.

"The test race was a bit wet and then you have the dry line but the other parts of the track stay wet, you have to really time your overtakes well because if you go on the wet patch you lose a lot of grip and it becomes extremely difficult.

"But as a team I think [it's about] just playing the long game really, especially with Max and I know myself, being used to going for the overtakes as soon as we get the chance, to now instead think 'I'll give it one corner more before I know I can 100% make this move cleanly'. 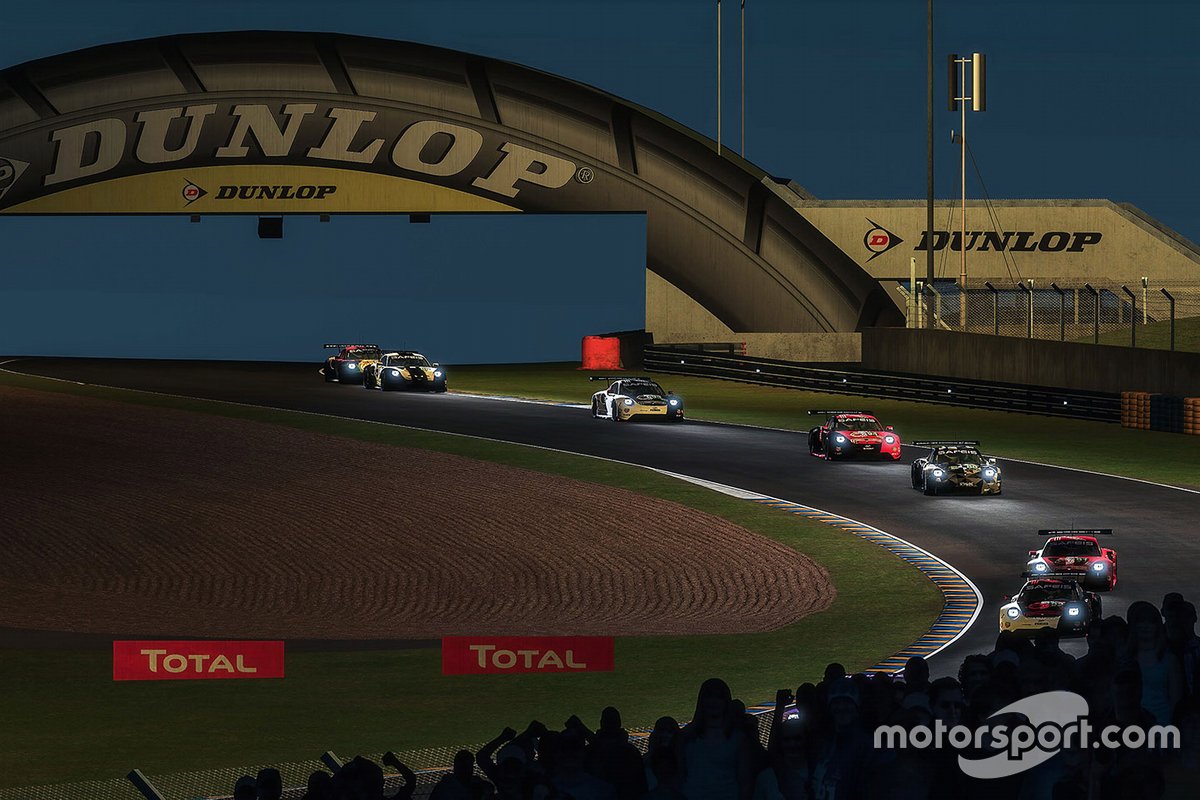 "I think that's probably one of the biggest things but I don't think there's too many big challenges. I think the competition are extremely tough, there's a lot of good drivers, a lot of big names and a lot of guys who are putting in a lot of time into it."

The COVID-19 pandemic has largely caused negativity over the last few months across the globe, but one positive it has produced is the rise in Esports, especially for motorsport.

The 24 Hours of Le Mans Virtual may not be quite the same as standing by the Porsche Curves in the middle of the night or flocking onto the start/finish line after 24 hours of racing, but at a time when fans are looking for a distraction they could do worse than to watch an event with such a star-studded line-up.

Coverage of the event will be streamed on Motorsport.tv and Motorsport.com from 1330hrs BST on Saturday.

Why real-life drivers could surprise at virtual Le Mans