Esports
Formula E: Race at Home Challenge - Round 6
30 May
-
30 May
Next event in
00 Hours
:
15 Minutes
:
09 Seconds
See full schedule
See full:
Schedule Results Standings
Join prime
Sign in
All me 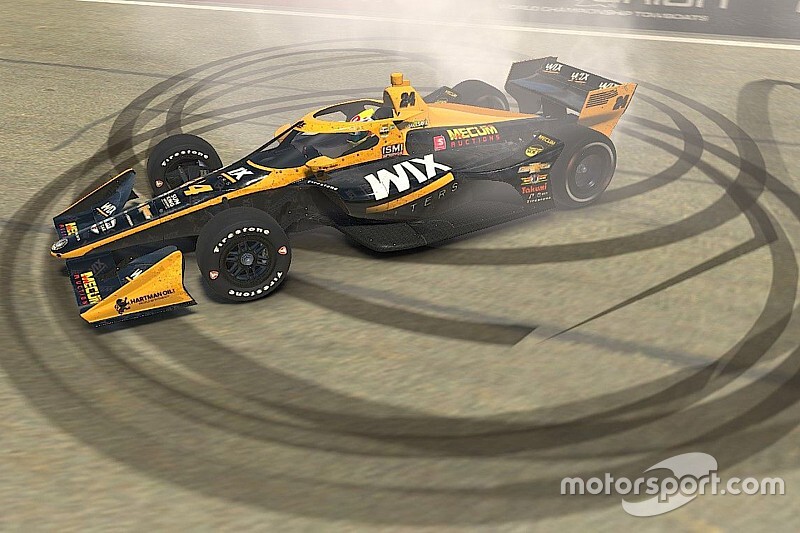 From pole Karam took the lead of the 45-lap race ahead of fellow front-row starter Rosenqvist, and the pair remained uncatchable, only dropping out of the top two positions during the two obligatory pitstops.

Eleven seconds off the lead, Will Power was third for Team Penske-Chevrolet with teammate and aspiring IndyCar debutant  Scott McLaughlin fourth, the Supercars champion holding off Oliver Askew of Arrow McLaren SP-Honda.

From pole, Karam took the lead ahead of Rosenqvist who was holding off Scott Speed in the Andretti-Herta Autosport-Honda, Power, Askew, and Alex Palou of Dale Coyne Racing. Further back, another Alex, IndyCar’s last Watkins Glen winner Rossi, was taken out of the running by a shunt.

Askew passed Power for fourth on the opening lap and then initially held off the Penske driver’s retaliatory attempts, while behind Palou, ran the other three Penskes – McLaughlin, Simon Pagenaud and Josef Newgarden, with Graham Rahal completing the top 10.

Palou passed Power into the Bus Stop chicane on Lap 4, but Power regained fifth when both he and Palou retook Askew. When McLaughlin tried to make a similar move on the Arrow McLaren driver at the Bus Stop chicane, Askew stayed alongside just long enough to nerf the Supercars champion into a spin, and their spin caught up Pagenaud and Newgarden. The latter two would have to pit, whereas the perpetrators continued, Askew in seventh and McLaughlin in ninth, separated by AJ Foyt Racing’s Dalton Kellett, and now behind Graham Rahal.

After 10 laps, Karam was leading Rosenqvist by 2.2sec, with Speed running a lonely race, 3.3sec behind, but 2.5sec clear of Palou who kept having to run defensive lines to hold off Power until the Aussie outbraked himself into the first chicane and ran through the grass.

Palou was the first to pit but soon after, he appeared to collide with McLaughlin and needed to stop again.

After the rest of the stops shook out, Karam retook the lead with Rosenqvist still in second but now 3.4sec down. Power stayed out long, set some fast laps and emerged just ahead of Speed. The ex-F1 driver stayed in contact with the Penske driver, if not actually applying pressure, but moments after the pair of them lapped NASCAR legend Jimmie Johnson, Speed spun.

In the final third of the race, the recovering McLaughlin, Pagenaud and Newgarden re-entered the Top 10 and following the second round of pitstops, they ran fifth, sixth and seventh, ahead of Santino Ferrucci of Dale Coyne Racing with Vasser-Sullivan, Kyle Kirkwood subbing for Ryan Hunter-Reay in the #28 Andretti Autosport machine, and Dalton Kellett in the AJ Foyt Racing-Chevy.

The Askew vs McLaughlin battle for fourth enlivened the closing 10 laps, and this time there was no collision when they went two abreast into the Bus Stop brake zone, McLaughlin claiming the spot, but with Askew staying on his tail all the way to the end.

Karam had to swerve to avoid a spinning Kirkwood in the final stages, but remained composed and won by 3.6sec, with Rosenqvist beating Power by 8sec.

Jimmie Johnson finished 16th on his e-IndyCar debut, while James Hinchcliffe failed to start after being bounced out of the system.

Next Saturday’s second round will be set at Barber Motorsports Park.