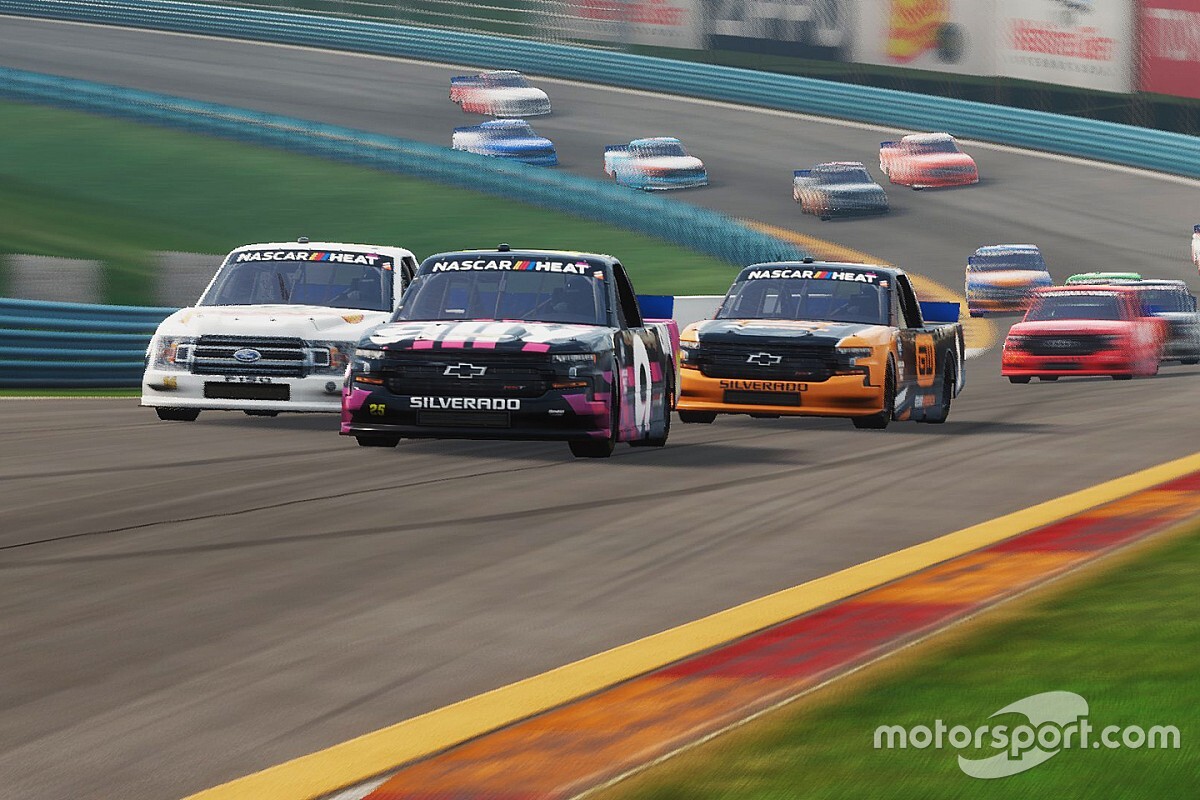 The second round of the eNASCAR Heat Pro League took place at virtual Watkins Glen International Wednesday evening with the Trucks on track at the historic road course.

First up were the PS4 drivers in a wild race, packed with action from start to finish.

Pole-sitter Brandyn Gritton held the early lead, but trouble four laps into the event would hand control over to Nick Jobes and Maxwell Castro. The two drivers then banged fenders as they fought for supremacy at the sharp end of the field.

Kyle Arnold was able to join the fight and had a go at Jobes for the race lead, but ended up losing a position as Joey Stone made his presence known.

Jobes, Castro and Arnold were the first of the frontrunners to duck down pit road, followed by Stone one lap later. He would come out just in front of Castro and the duo briefly battled for the lead before Arnold slipped by them both as contact was made.

The final set of pit stops came with eight laps to go with Arnold cycling back into the top spot with Castro in hot pursuit.

Arnold touched the outside wall coming to the white flag, allowing Castro to have a run down to the inside in Turn 1, taking over the race lead. Arnold remained close the entire lap and gave Castro a shot in the final corner.

Castro would slid sideways and end up hooking hard to the left, colliding with Arnold and sending both trucks careening into the wall. Rookie Castro was able to limp across the line and take the checkered flag in a spectacular finish with Stone just a tenth of a second behind.

Cody Giles was able to slide into third while a disappointed Arnold was forced to settle for fourth-place. Jobes rounded out the top-five and is now tied for the championship lead with Castro.

"It was insane," the Chip Ganassi Gaming driver said of the finish, claiming that he hooked left into Arnold only in an effort to regain control after sliding sideways. He added that he "felt really bad for ruining (Arnold's) race."

The Xbox race was much tamer, but still had its moments. Daniel Buttafuoco led from the start and maintained an early advantage over Luis Zaiter.

But the battle was intense in the back-half of the top-ten with six to seven trucks vying for positions seventh through tenth. The hectic battle culminated in a door-slam between Matthew Heale and Mitch Diamond down in Turn 1, but both drivers continued on.

Buttafuoco would take the race win for Germain Gaming, a bit of redemption for the team after a tough loss with Arnold in the PS4 race. Zaiter trailed by three seconds at the finish but took second with ease.

Justin Brooks placed third and Nick Walker came from the rear of the field after missing the drivers meeting to finish fourth. Slade Gravitt rounded out the top-five.

"I'm just super thankful for this opportunity from Germain Gaming and Germain Racing," said an elated Buttafuoco. "These opportunities don’t come so easy. We worked hard for it."

He now leaves Watkins Glen tied for the championship lead with Brooks as both drivers have 65 points each.

The eNASCAR Heat Pro League, a collaboration among Motorsport Games, NASCAR and the Race Team Alliance, features 14 eNASCAR teams and is played on NASCAR Heat 4, the newest iteration of the NASCAR video game franchise. Each team features one Xbox player and one PlayStation 4 player.