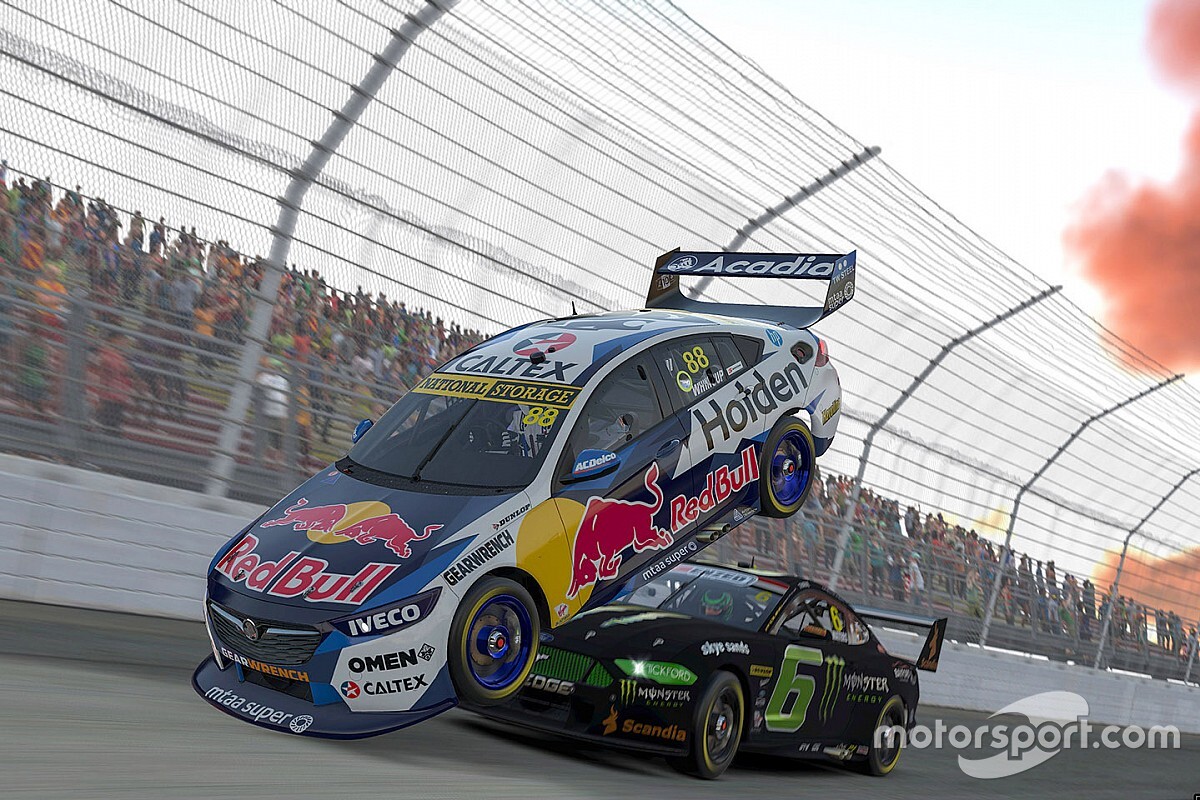 Check out some of our favourite bits of banter between the Supercars aces from the ninth round of the category's Eseries on the Michigan International Speedway.

Shane van Gisbergen with some sharp fortune teller work on the opening lap of the first race.

"Hazelwood is a bit scary... oh there he goes."

James Courtney makes his case to race control after being stung for speeding in pitlane in the first race.

Alex Davison gets stuck into the oval racing lingo while delivering a stern warning to Macauley Jones.

Van Gisbergen driving through the smoke from the back of the grid at the start of Race 2.

"Man, this is like full Days of Thunder type s**t."

Will Davison looking for someone to blame after a mid-Race 2 rumble.

Coulthard: "Not me, bro."
WD: "Cheers Scotty."
Scott McLaughlin: "Trying to avoid something up top, brother."

Race director James Cowan with a less-than-subtle message to a lap-down Jamie Whincup about running in the lead group.

JC: "Car #88, just a reminder you're a lap down."
Coulthard: "He's already screwed the race."
Nick Percat: "Lol."
Garry Jacobson: "Better call the Safety Car out."
NP: "The correct cars are at the front Garry. They won't."

Scott McLaughin contemplates taking matters into his own hands.

"What is Jamie doing? I'm spinning him. He's going into the fence. I'm telling ya, I'm getting up there and it's going to be big."

The big one strikes early in the third race.

Todd Hazelwood: "What the hell Winterbottom, mate."
Mark Winterbottom: "Oh dude there was that much s**t going on. Watch the replay man. Sorry."

Will Davison with a creative plea for a competition caution.

After Percat ends up on his lid, he and Winterbottom share a sneaky call-back to Bathurst 2019.

MW: "Would you be regarded as 'debriss' right now, Nick?"
NP: "I am 'debriss'. You would think this is 'debriss'. A car in the gravel got a 'debriss' call and I'm upside on the straight. Get an ambulance out there."
MW: "Nah press on."

Courtney comes to Percat's rescue – by spearing into him and rolling him back into his wheels.

Next week's 10th and final round of the Supercars All Stars Eseries will be streamed live and free through Motorsport.tv.