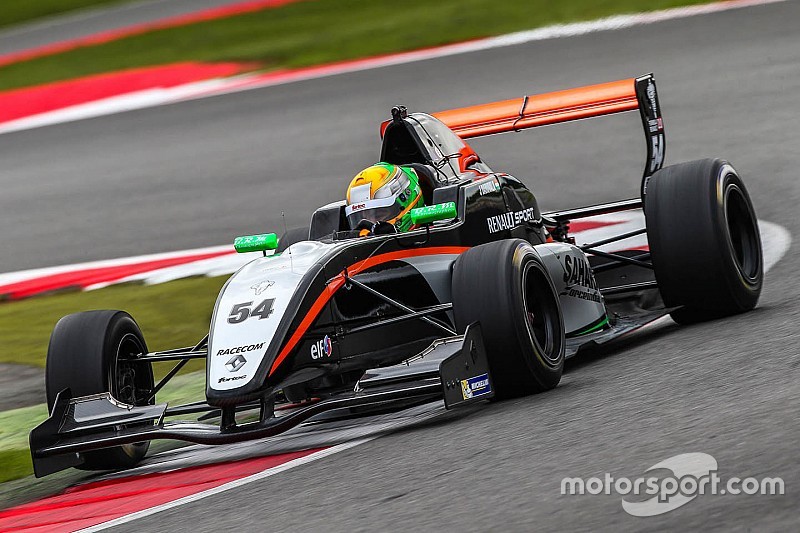 For the first time in Indian motorsport history, six Indian drivers raced at the same time for a full season in various junior single-seater championships in Europe this year.

While it is was learning a curve for all of the drivers, the most promising out of the lot was certainly the Force India academy driver Jehan Daruvala.

Along with Daruvala, the likes of Arjun Maini, Tarun Reddy, Akhil Rabindra and Ameya Vaidyanathan, each showed glimpses of potential they had.

Here's how they went with their season in 2015:

The most talked about young Indian driver Jehan Daruvala made his much awaited single-seater debut in 2015, a year before it had been originally planned. Such were his results in karting that the team decided to fast-track his move to open wheel racing and he didn’t disappoint.

Coached by Formula Renault 3.5 champion Oliver Rowland and competing primarily in NEC championship, the Indian finished an impressive fifth in his rookie season, runner-up to Max Defourny in the rookie standings. He even beat all his Fortec Motorsports teammates in the process.

Although the elusive first win didn’t come his way, he notched up three podiums with a best finish of second at Nurburgring and also took four rookie trophies in the process. Apart from the two retirements, the Indian scored in every race, consistently qualifying inside the top 10 (11 out of 16 races).

While he showed good pace, he often struggled with his starts - which he admitted to and worked on. Considering it was his first time at several of the F1 circuits, the Mumbaikar native made his presence felt, not only in the NEC championship but also as a guest driver in the Alps and Eurocup 2.0 series.

A podium, rookie trophy and two poles (at Misano) was his highlight in the sister Alps series, and apart from one retirement, he scored points in all other six races he drove in.

The Eurocup, on the other hand, proved expectedly tougher. After a heavy crash in Silverstone, the Indian only managed one top-10 finish in the challenging series.

A fruitful first season, nevertheless, with impressive post-season testing in Formula 3.5 V8 and Eurocup, means the Indian should be challenging for wins and perhaps even the title in NEC and Eurocup with Josef Kaufmann Racing in 2016.

Before his European F3 journey began, the Indian rookie coached by Karun Chandhok, had a fruitful winter season in the Toyota Racing series in New Zealand, finishing fourth with two wins, five podiums and three poles.

Runner-up to George Russell in the 2014 BRDC F4 championship, he got the break Van Amersfoort Racing in 2015. With just six days of testing under his belt, Maini was signed by the Dutch team for the a rookie European F3 campaign.

After a sedate start to his first F3 season, the 17-year-old came alive in the third round at Pau where he made it to the rookie podium and finished fourth overall, his best result. But in an ultra-competitive season where one second made up around 20 places in qualifying, it was a tough learning experience for the Bangalore-based driver.

Although he managed to score points in the rookie standings, it was hard to score in the main championship. After Pau, it was only at Nurburgring that he finished inside the top 10. But occasional strong outings, including sixth in Masters of F3, showed his potential behind the wheels.

While his extraordinary teammate Charles Leclerc led the way, he was able to fend off Alessio Lorandi in the inter-team battle. Fellow competitors rated him as quick, but inexperience put him off in his rookie year.

He was involved in some hefty battles with Tatiana Calderon, but overall the Indian did well to finish inside the top 10 (ninth) in the rookie standings, while inside the top 20 (18th with 27 points) in the main championship.

After the F3 season, he switched to the T-Sport squad for the Macau Grand Prix and did well to complete the race in 10th, wrapping up a learning 2015. Next season will be a decisive season for the Indian and an opportunity to build upon the rookie F3 season.

Before the European season started for Tarun Reddy, he competed in the MRF Challenge 2014-15 series finishing fifth in the standings, taking a win and two podiums. It was good preparation for a new challenge - racing in the MSA Formula with Double R Racing.

Replacing the British Formula Ford championship, the inaugural year of the MSA season was one to forget for the Indian star. A promising stint ended in frustration with numerous issues and retirements throughout the year.

The high point was his lone podium at Croft where he finished third after starting eighth. Eventually, he ended 14th overall with 83 points. In the 30 races, the Chennai-born endured 12 retirements with seven DNFs in the last 10 races.

But a few races like at Donington (P6), Croft (P3, P6 and P8), Snetterton (P8, P5, P6) showed his talent and potential behind the wheel. A mixture of bad luck and inconsistency proved detrimental for him.

For next year, it is known that he will not do another season in MSA but he hopes to secure a BRDC F4 drive after testing with Fortec in the post-season and currently is competing in the MRF Challenge to prepare for the 2016 season.

In his first year in single-seaters, Ameya Vaidyanathan gained a bucketload of experience and improved as the season went by both in BRDC F4 and MSA Formula.

The Indian focused more on his fruitful BRDC campaign with Hillspeed, where he took three podium finishes. He surprised the whole F4 field at Rockingham with a stirring drive to second place from 1th on the grid.

An up and down year in F4 but towards the end of the campaign, after some strong finishes, he pipped his fellow Indian Akhil Rabindra in the championship table, finishing 12th with 217 points. In the season where he mostly qualified and finished outside the top 10, in the last nine races, he secured five top 10s, among them two podiums.

On the other hand, in MSA, the Indian had a tougher campaign with Joe Tandy Racing, finishing 22nd in the main standings with 15 points and ninth and last in the rookie standings with 110 points.

Having missed three rounds in the season, Vaidyanathan got his best finish at Rockingham with a 10th place. Along with BRDC and MSA, the Indian also competed in one round of the Formula Renault 2.0 NEC with MGR Motorsport, finishing 16th in both his outings.

While his 2016 season is yet to be confirmed, he did a round in the BRDC Autumn Trophy to complete his debut year in cars.

After two years in the FIA Academy in 2013 and 2014, Akhil Rabindra moved to Europe to take a step up in realising his dreams. Competing in the BRDC F4 championship, the Douglas Motorsport driver showed glimpses of fine driving in what was a mixed season for him.

The Indian teen was there or thereabout in the race but didn’t have that extra luck to get over the line in terms of delivering a monumental result. At Snetterton, he started on pole by virtue of the reversed grid but such was his luck, he limped home at 13th.

Another opportunity presented itself at the same circuit on a different weekend, as he once more started on pole, only to retire on the opening lap. Thus, he finished 13th in the standings accumulating 203 points with seventh at Rockingham standing his best result of the season.

He dovetailed his BRDC season with competing as a guest driver in the Indian JK Tyre Racing series, where he started off with a bang but ended the campaign in a subdued manner.

He is yet to decide his future plans, but another year in BRDC cannot be ruled out.

After finishing 12th in the 2014 Italian F4 championship, Mahaveer Raghunathan graduated to European F3 this season with Motopark. In what was a difficult year for the Chennai-born driver, he secured his best finish of 20th in Norisring, scoring only 1.5 rookie points.

The inexperience was there to be seen as he mostly finished 25th or below (19 out of 29 appearances) in a competitive championship. The Indian also competed in the Masters of F3 where he finished 17th.

Apart from his F3 duties, Raghunathan was also seen in action in a few rounds of Formula Renault 2.0 Alps with Cram Motorsport, NEC with MGR and EuroFormula Open with West-Tec.

The 17-year-old rounded off the year by taking part in the Formula 3.5 V8 test with Comtec Racing and also the post-season GP3 test - the first Indian to get his hands on such machinery with Campos Racing and Trident.

As for his 2016 season, it remains to be seen what he chooses to do after having tested in Formula 3.5 and GP3 but another year at European F3 might be a better option for the young Indian than moving further up the ladder so quickly.

The Kolhapur-born Parth Ghorpade returned to competitive racing action back in July after a long recovery period, competing in Euroformula Open with DAV Racing.

The Indian only raced in three rounds with the team and scored twice finishing 10th at Red Bull Ring and Spa-Francorchamps.

The sole motive for Ghorpade was to test his injured shoulder and he showed good potential in the three outings in Europe. He rounded off the season racing in the last round of the JK Tyre series.