Matt Parry will remain with Fortec Motorsports as he steps up to the Formula Renault Eurocup for 2014.

Sticking with the team that helped him lift both the 2012 Intersteps and 2013 Formula Renault NEC titles provides vital continuity for the 20-year old Welshman as he attempts to make it ‘three in a row’ and take another step on the road towards F1. 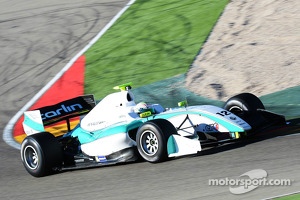 With the backing of the Caterham F1 Team also confirmed for another year, Parry will be able to focus on the seven-round Eurocup campaign, which will traverse the continent in support of the Renault World Series, a recognised feeder to the top flight highlighted by 2013 champion Kevin Magnussen’s elevation into the McLaren line-up for 2014. The Briton won five times en route to his NEC title last season, and has already beaten many of the drivers he expects to face in this year’s Eurocup.

“Continuity is seen as a vital component for success, so I hope that remains true this season,” Parry commented, “I have struck up a good rapport with Fortec over the past couple of seasons, and will look to continue our title-winning form in the Formula Renault Eurocup. Of course, another step up the ladder means that the competition will be tougher, but I believe that we know each other well enough, and will be sufficiently prepared, to take whatever the opposition throws at us. It seems a long time since I last raced, so I can’t wait to get started.”

Parry, who became the 25th McLaren <i>Autosport</i> BRDC Award winner in December, has already completed ten days of testing with Fortec’s Eurocup team, taking in circuits such as Jerez, Spa, Paul Ricard and the Hungaroring which feature on the 2014 schedule. He is also planning to add a handful of FRenault ALPS outings to his programme between Eurocup commitments, having featured on the podium on his only 2013 appearance in the series at Imola. The 2014 Formula Renault Eurocup kicks off at Spain’s Motorland Aragon circuit on the weekend of 27 April and closes at Jerez in mid-October.

“The Eurocup schedule, as well as supporting the Renault World Series, also gives us the chance to race on different circuits, including current F1 tracks in Belgium, Germany and Hungary,” the BRDC Rising Star commented, “Throw in well known F1 testing venues such as Jerez and Paul Ricard, and the championship becomes an important proving ground for anyone looking to make it to the very top.”

Parry, who will continue to campaign in Caterham’s familiar green F1 livery in 2014, will also retain the backing of Sport Wales, as well as the patronage of the MSA’s Team UK programme, which recently saw him taking in a week of winter training in France.

The ground-breaking high performance ‘workshop’ aimed to equip the partaking drivers with career-enhancing knowledge and skills and comprised an array of physical and mental activities designed to take them on a journey of self-discovery and understanding, helping them to identify their individual strengths and weaknesses. The four-day session featured a variety of challenges - including climbing, abseiling, orienteering and igloo-building - alongside in-depth review and analysis sessions with MSA coaches, and Parry confirmed that he had benefited from the experience.

“I’ve come up through every level of the MSA Academy and, having been able to get a taste of Team UK in the past, I understood how advanced the programme was - but this exceeded all my expectations,” he admitted, “As a driver, you have a ‘toolbox’ and, throughout the four days, I was definitely able to add more tools that I can use to progress higher up the motor sport ladder.”

While the 2014 Formula Renault Eurocup provides the next step on that ladder, Parry will get an early taste of the top rung later this season, courtesy of a test in one of McLaren’s F1 cars. Part of his prize for winning the McLaren BRDC Award, the Welshman hopes that the opportunity will eventually allow him to join fellow Award alumni David Coulthard, Paul di Resta and Jenson Button in making it all the way to F1. A date for the test has yet to be set.