Impressive debut for Daruvala at Spa 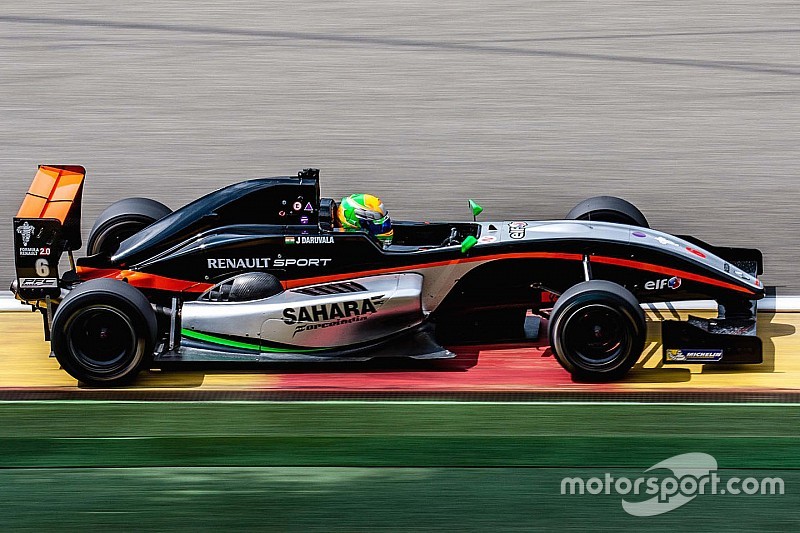 Jehan Daruvala, Force India's protege competed in the fourth round of the Formula Renault 2.0 NEC series at the Spa-Francorchamps this past weekend.

This was the first time that Daruvala had driven at the iconic Spa circuit which is a demanding track for any driver but he managed it well, adding another circuit to his 'learning' list.

The NEC championship where Daruvala is primarily competing this season started on a Thursday as it played a support race to the Spa 24 Hours.

Daruvala was joined by his three teammates at Fortec Motorsports. While Alex Gill (UK), Ferdinand Hasburg (AUT) and Daruvala himself are rookies, their teammate Callum O'Keefe (RSA) is the senior driver of the team.

The first practice session took place on a Thursday and the young Mumbaikar was rather quick to acclimatise with the circuit in his Fortec Motorsports car.

He finished second in the first session, just 0.102s away from leader Dan Ticktum of Koiranen GP while Colin Noble of MGR Motorsport slotted in at third behind Daruvala.

It didn't take much time for the Indian to go even faster as he finished the second practice session on top with the time of 2:19.093 while his teammate Hasburg was 0.479s away. Championship leader Louis Deletraz was third.

While Daruvala enjoyed the practice sessions, he had a difficult time during the two qualifying sessions.

A different day might have hindered his good Thursday run as for qualifying one on Friday, he only managed a sixth position.

ART Junior Team's rookie Max Defourny took pole with a time of 2:18.820 as Daruvala ended 0.448s away from the polesitter.

He was the second highest rookie driver after Defourny. O'Keefe ended second while Kevin Jorg of Josef Kaufmann Racing was third.

In qualifying two, Daruvala was again sixth with Deletraz claiming pole with a time of 2:17.963 as Daruvala ended 0.732s away from first. Defourny settled for second and Jorg was third.

After the two qualifying sessions on Friday, the day was completed with race one of the NEC Spa weekend.

Starting sixth, the young Indian driver finished in the same position after a highly competitive race which saw only one overtaking move among the top seven drivers, in the field comprising 25 drivers.

With not many opportunities to overtake, and with two laps to go in the race, Daruvala attempted a move on Ukyo Sasahara (ART Junior Team), who was running fifth.

However, the Japanese driver squeezed Daruvala and he was forced to back off as he lost momentum putting two wheels into the grass.

There was no other opportunity to attack and thus he had to settle for a sixth position as Defourny took the win while Jorg finished second and O'Keefe third.

The race two took place on Saturday morning and it was a complete washout as torrential rain hit the circuit, creating conditions which led the race director to cut short the race.

It started under the safety car and, with no real improvement in the conditions, it ended that way.

All the drivers finished in their qualifying position and were awarded half points which meant Deletraz got the win while Defourny was second and Jorg third with Daruvala again finishing sixth.

Daruvala however, was not overly happy with the weekend, "It’s not an ideal result," he said after the race.

"Considering it was my first race at this historic circuit, I am happy with my pace," he added. "It was difficult to overtake in the first race.

"Once again I have learned a lot at this circuit. I look forward to some good races in the next weekend," he concluded as he prepares to race this weekend at Assen.

Daruvala sits seventh in the championship with 100.5 points and is the third-highest rookie driver as Deletraz leads with 207 points.

Double pole and a podium for Daruvala