Colin Noble Junior, has signed up with MGR Motorsport to compete in the forthcoming 2014 Protyre Formula Renault Championship.

The move to single seater action is a natural step up for Colin having dominated last year’s Radical SR1 Cup, winning seven out of the eight races to seal the title in his first season and more than 50 points clear of his nearest challenger. 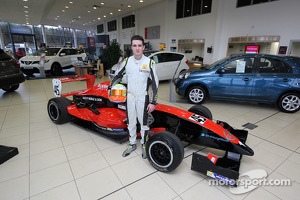 Along with the South American, Colin’s other teammates include Matteo Ferrer from Colchester and a promising 16-year-old Indian, Tarun Reddy.

MGR Motorsport’s credentials are impressive with the team being the reigning Protyre Formula Renault champion entrant. The owner and principal, Mark Godwin, is a renowned engineer who’s highly experienced and successful personnel have won races and titles in Formula Ford, Formula Renault, Formula BMW and Formula 3. Mark Godwin said of Colin: “We haven’t done any testing with Colin yet, but he’s got a championship-winning package under him and he did a fantastic job in the Radicals last year. I’m sure he’ll be very competitive from the off and we’ll have four strong drivers. The aim is to try and emulate what we did last season!”

Colin and his three teammates will be competing in fifteen races across the 2014 season at well known race tracks across England (see Notes for Editors for details).

The meetings at the Snetterton 300 circuit at the end of August and the season finale at Silverstone are also due to be televised giving Colin and the rest of the team the chance to impress in front of a live television audience.

Colin Jnr said: “I had a fantastic debut last season but I’m moving up a couple of gears into the big league now. I’ve got a great car and I’m part of a championship winning team, plus of course, I’m delighted to have the continued support of the Alex F Noble Nissan racing team, so everything is in place for what should be an exciting season”.

As to his prospects for the championship, Colin concluded: “There are nearly twenty-five seasoned drivers in the Protyre Formula Renault Championship. If I was to be in amongst the top five at the end of the season, I would regard that as a result.”

Colin’s father, Colin Noble Snr, who is also a director of Alex F Noble Nissan, the Straiton based car dealership which is the main sponsor of Colin’s single seat, FR 2.0 litre, 200bhp car, said: ”We’re delighted Colin is with MGR Motorsport. After the success of last season, we were very careful in selecting who we felt was best placed to take Colin’s career forward. MGR provides a blend of excellent race car preparation and individually tailored driver development and coaching which we all feel gives Colin the very best chance of success”.

Fittipaldi returns as part of capacity line-up at champions MGR