Sophia Floersch: Fighting like a lioness on F4 debut

In her first column for Motorsport.com, rising star Sophia Floersch talks us through her very first race weekend in open-wheel cars and explains it left her both happy and disappointed.

My dear friends from Motorsport.com,

This past weekend marked my debut in German Formula 4 at the Oschersleben venue - and it started out pretty well.

I was happy with P4 and P8 in the two practice sessions on a wet track. I had even occupied the top spot for about 20 minutes, but then I had to come in to have my tyres changed as I needed to run them in before the races. But my pace gave me some good motivation.

Prior to Oschersleben, I had worn a splint for two weeks due to tendonitis - but it didn't bother me in the car, which was a massive relief.

Friday afternoon we took to the track for our qualifying session, but in two groups – group A and group B - and I was in the latter. I was a bit nervous as it was to be my first-ever qualifying in formula racing. When group A was on track, I was already in the car, thinking about my braking points, turning points, corner apexes.

My team Motopark was pretty positive and my engineer Dennis made me feel confident. And when I returned to the pits after my flying laps, I was P4. Unfortunately, two drivers beat my time in the final stages of the session. So in the end I was P6 in my group and P12 overall.

It was quite okay. It would have been nice to be a bit nearer to the front of the grid but, again, it was my first qualifying in formula so I was happy.

I was even happier when I was told in the evening that I had scored P3 in my group for the second race, the grid for which is based on the second-best times. That meant P6 for the second race. Wow! A few spots in front of Mick [Schumacher] - that's pretty cool, too. 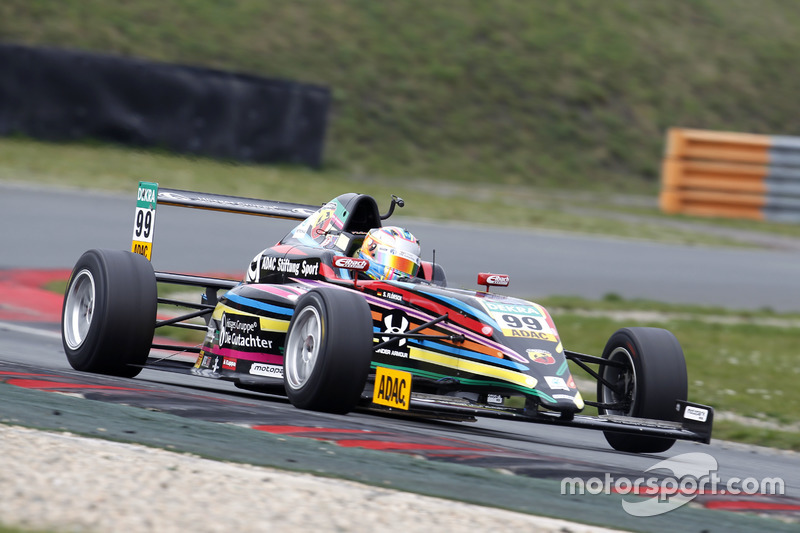 All we did on Saturday was the first race. The CEOs of my main sponsors Husges – Die Gutachter and Instamotion were on-site and had brought a few associates with them to witness my first ever F4 race. And that meant I had a bit of additional pressure on my shoulders.

Of course, you want to live up to your promise - and I want to show what it means to be racing "powered by passion". There were a few fans from England even, having travelled to Oschersleben to cheer on me!

I was nervous, as you can imagine. The weather was dry then but a few dark clouds were already gathering in the sky - and as the grid was cleared for the installation laps, it began to pour down.

As such, each team and each driver had to decide between slicks and wets - in the end, my engineer Dennis and I went for wet tyres because the track was pretty wet already. That made me a bit more relaxed.

The race was started behind the safety car. I didn't want to take too many risks but wanted to gather experience only – and finish the race.

Okay, it was also my goal to finish inside the top 10, especially because of the reversed-grid rule for the third race of the weekend.

It worked out well - I crossed the finish line in ninth. Honestly, my first-ever F4 race was a great pleasure!

The team was happy with my performance as it was my first race in a formula car and in difficult conditions, too. And it was great to see that the fans held my performance in high esteem.

I think I signed about 100 autographs that afternoon alone.

Annoyed to not be considered a rookie 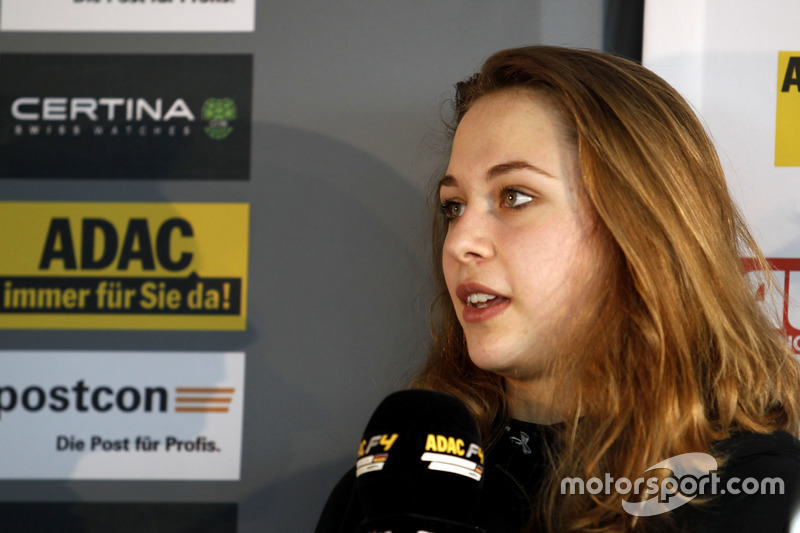 I believe I'm really the fastest among this year's rookies - but the organizers don't see me as a rookie because I competed in the British Ginetta Junior series last year already.

This is very annoying, I have to say, as I'm the youngest girl on the grid. Other drivers are 18 years old and yet they are rookies. And there are even drivers who have raced in Italy or New Zealand already. They have so much more experience than I do.

Some of them have had their licence for a while - whereas I had had to take a licence class with DMSB only two weeks prior to the race weekend. 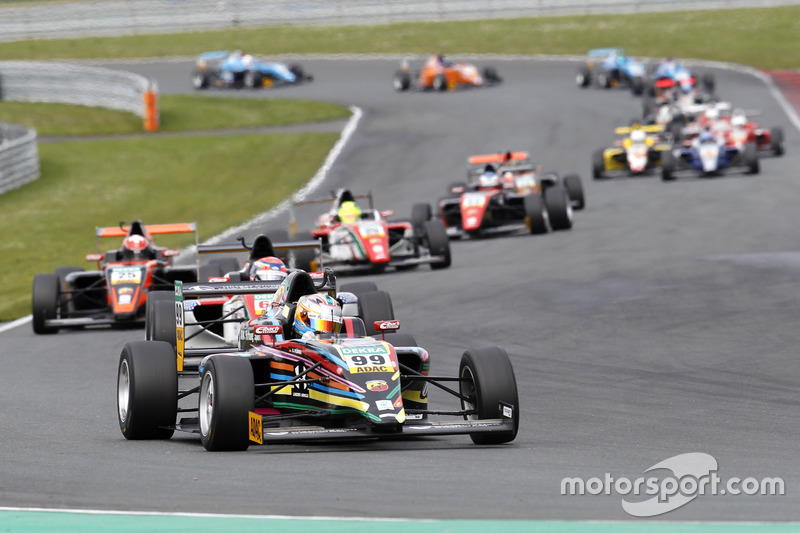 On Sunday morning I had P6 on the grid for the second race with a podium spot lingering on the horizon. We had a partially dry track and took the start behind the safety car again.

And I didn't feel nervous at all. My team principal Timo [Rumpfkeil], Dennis and my mechanics told me to take it easy and to go for it without pressure. I had ticked of my goal with a top 10 result in the first race already.

Of course you set yourself a target, you always do as a sportsperson. And I wanted to finish inside the top five in this race. My start was okay and I defended my position. The car felt great and I was following closely the driver in front of me.

Unfortunately, someone crashed into me during Lap 5 with 13 minutes to go. I felt I had the speed and it would have been a top 5 finish for sure.

I didn't take off my helmet as I walked back to the pits, just to make sure.

Boy, I was angry! After the race Dennis and the team tried to calm me down. Together with my team boss I went to see the stewards, where the other driver took the blame for the crash and got a penalty.

All well and good, but this didn't help me one bit as my race was destroyed anyway. But I was already looking forward to the final race - P2 on the grid! In 2015, Mick had occupied this very spot and turned it into a race win.

Losing a podium on the final lap 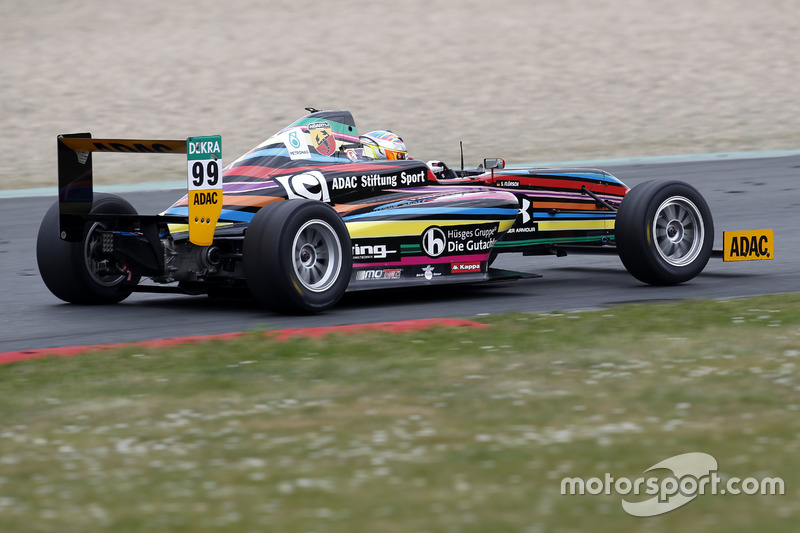 The final race was to take place in the dry and several cameras were zooming in on me. It was my first ever standing start in a formula car and I had a lot of thoughts going through my head. But I told myself: "It'll work out."

Despite being nervous I got away pretty good. It wasn't the perfect start but I was able to defend my position. Wow! P2! Way to go…

A few laps into the race I suddenly found myself at the head of the field for a few moments. This is when I made history: the first women to lead a F4 race! But at the end of the long straight Mick overtook me. My mirrors had slipped a bit and therefore I couldn't see how close he was already.

So I left enough room during braking and turning in - I didn't want to risk a crash, but I wanted to stick with Mick. However, he and his car were bloody fast and I lost his slipstream soon after.

Next in line was Joey Mawson. This time, I didn't want to be overtaken that easily. I get along pretty well with Joey outside the car and I know him to be a fair and clean driver. It took him a few laps but then he took the first chance he got as my tyres began to degrade.

Still, I held P3 in the final lap. But it wasn't to be as my bad luck returned in the form of [Job] van Uitert crashing into me in turn 2. His car understeered massively and he collected me - bang! I spun around with my rear wing gone.

Luckily, I had opened quite a gap to the cars behind me. So I put my car into first gear, pushed the pedal and went off again. A Neuhauser [Racing Team] car rushed past me but that was it. I was back up to speed and, for a bit, didn't even know that my car didn't have a rear wing anymore.

Soon I finally realised the car wasn't behaving as it should have. However, I didn't want to quit. And I didn't want to get overtaken, too. So I fought to keep my position and finished the race in fifth.

Taking the good and the bad 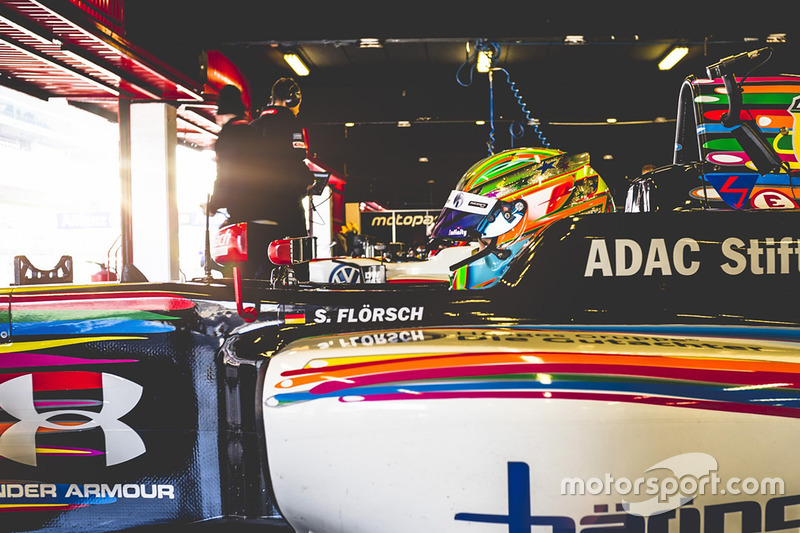 I was angry and happy at the same time. P5 was great, of course. On my first F4 race weekend! But I had been third for a long time and it really was unnecessary to be pushed out of the race in the last lap.

On the other hand, the track commentator said I was fighting like a "lioness" and several journalists came to me saying I had shown great fighting spirit.

My weekend was great, but disappointing also. I'm happy I could show my speed and my fighting skills. This is what makes racing so unique and that's what I love about it!

My team, my sponsors and everybody involved were very happy with my performance. I think Motopark and I have shown that we have the pace to be a top-three finisher. Our time will come this season, no doubt. And I'm ready!

We all have our share of bad luck during race weekends. Certainly I had it already - two times during my first weekend. That's enough for 2016.

Now it's fast forward to Sachsenring in two weeks' time - and I sure am looking forward to it!