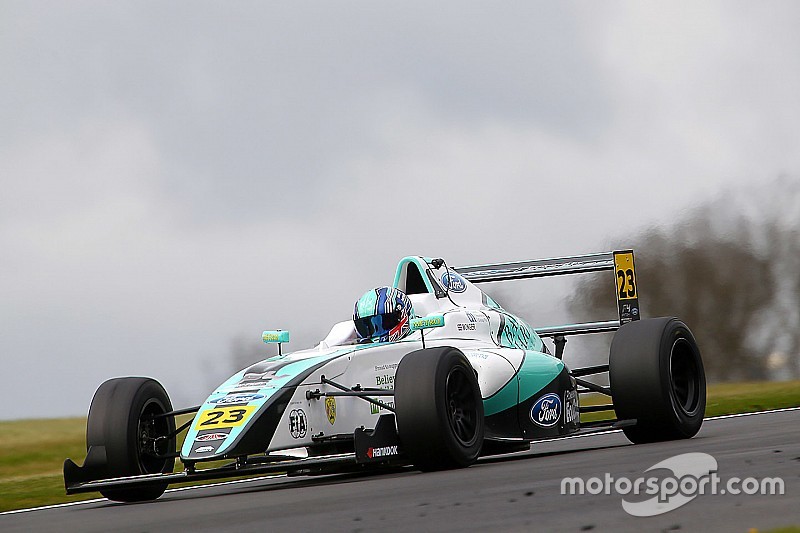 British Formula 4 racer Billy Monger has been injured in an accident in a BTCC support race at Donington Park.

The 17-year-old was battling through the pack in the third race of the weekend on Sunday when he came across the slowing Carlin car of Patrik Pasma.

The train of cars left Monger unsighted and he did not slow in his JHR Developments car, which went into the rear of Pasma as the pack went through Schwantz Curve.

Monger was conscious and talking after the incident but suffered leg injuries and the medics took nearly two hours to extricate him from the car before he was airlifted to hospital.

Pasma escaped serious injury but was taken to a local hospital by road for check-ups, and will remain there overnight.

A statement from Carlin read: "Following an incident in race three of the Formula 4 British Championship at Donington Park this afternoon, Carlin driver Patrik Pasma was taken to the on-site Medical Centre for assessment.

"Patrik, who is fully conscious and able to communicate with team personnel, will now be transferred by ambulance to the Queen's Medical Centre in Nottingham for further checks and observation overnight.

"Our thoughts remain with Billy Monger who was also involved in the incident."

A podium in Saturday's opening race had moved Monger to fourth in the championship, although he failed to finish the second encounter was fifth in the points before the start of the aborted final race.

Rookie Pasma is second in the points behind Carlin teammate Jamie Caroline.

No racing took place while the rescue operation took place, with the pitlane opening for second BTCC race at a slightly delayed 2.50pm.

Reger and Forcier win at F4 US season-opener