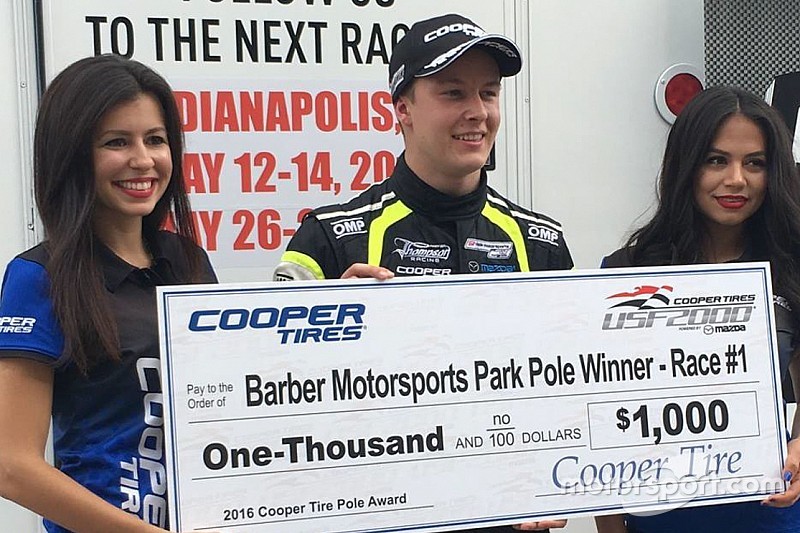 The 6th edition of the Team Canada Scholarship is proud to welcome its newest member Parker Thompson.

Parker Thompson resides in Red Deer Alberta and is currently second in the USF2000 Championship with the final weekend coming up at Laguna Seca Sept 9-11.

The 18-year-old is in his sophomore season in USF2000 and is enjoying a breakout season. His highlights include wins at Barber Motorsports Park, Indy, and the streets of Toronto.

Thompson stays very active, not only on the track, but with his Drive To Stay Alive program. The program is to educate high school students about the dangers of distracted driving. Parker is on a mission to travel across North America to provide his peers with the best practices on staying focused when they get behind the wheel. At the end of 2016 alone, Parker will have spoken to over 70,000 students across North America on the dangers of distracted driving.

"We are very excited to welcome Parker to Team Canada and have no doubt that he will be a great fit with our program, said comments Team Canada founder Brian Graham. “He has been on our radar for a while now and we believe he is at the right moment of his career to make the most from the Team Canada Scholarship and help further his progress to become a professional race driver. We were fortunate enough to witness his dominant performance at Barber this past April and spend a bit of time with him talking about his racing and his future goals. To add to his success, his work outside the cockpit is very impressive as well. We have a tough decision each fall to make and this year was no different, we wish the other nominated drivers continued success and will continue to cheer for all of our Canadian hopefuls.”

Focused on preparing the best

“Words can’t describe how great it feels to be chosen by an expert motorsport panel to represent the best country in the world,” Thomson declared. “This has been one of my goals for a long time now, to represent Canada over in England at the Formula Ford Festival. I think growing up in karting and watching some of the drivers I looked up to get chosen by the Team Canada Scholarship makes this moment all the more rewarding. For now I’m just focused on preparing the best I can for the event. I know I will be with a top tier operation racing for Cliff Dempsey Racing, and it’s up to me to put the Canadian flag at the sharp end of the grid. I can’t thank the sponsors and the Team Canada Scholarship enough for giving me invaluable opportunity.”

The 45th running of the Formula Ford Festival will take place October 21-23 with testing commencing the 19th at the world famous Brands Hatch Circuit.

Former winners have gone on to stardom in Formula One, IndyCar and are represented across the globe at the highest levels in sportscar racing. Team Canada will face young hopefuls from around the world and if tradition continues will be among the ones to watch as the week unfolds at Brands.