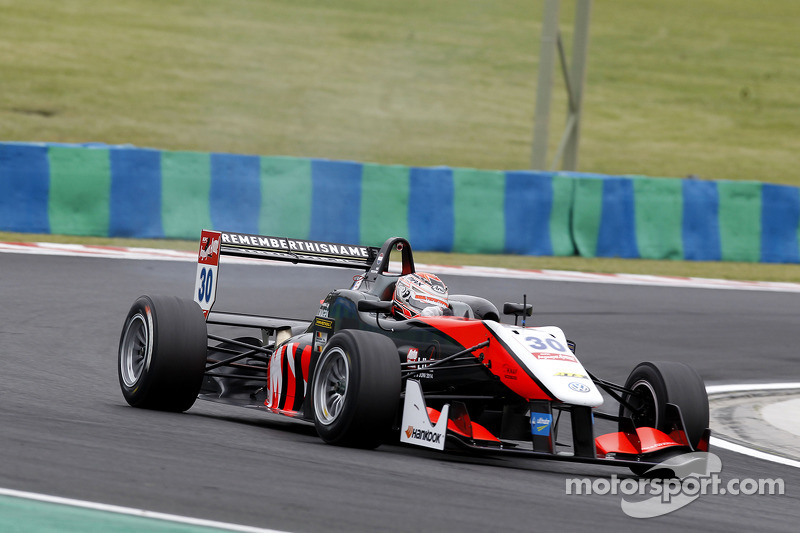 Max Verstappen claims his second victory of the season from Lucas Auer and Jake Dennis.

A sunny Spa-Francorchamps provided a highly entertaining first race of the FIA F3 weekend, with Max Verstappen (Van Amersfoort Racing) claiming his second victory of the season from Lucas Auer (kfzteile24 Mücke Motorsport) and Jake Dennis (Carlin). The young Dutchman had to work for it though, especially as the series leader, Esteban Ocon (Prema Powerteam), started from pole yet again after a wet qualifying session on Friday threw up some interesting results despite it being business as usual at the sharp end.

The start got a bit messy but everyone made it through La Source in one piece. However, it proved costly for Tom Blomqvist (Jagonya Ayam with Carlin), who tried to gain ground off the start, but ended up running wide and losing ground instead. Meanwhile, out at Les Combes, Verstappen has seen his opportunity and was through on Ocon to snatch the lead from the Frenchman. Ocon then tangled with team-mate Antonio Fuoco. Whose fault it was was hard to say but the end result was a DNF for Prema’s star driver. Team principal Rene Rosin was probably not best pleased.

By the close of lap 1 then, Verstappen was in the lead from Auer, while Felix Rosenqvist (kfzteile24 Mücke Motorsport) was 3rd ahead of Dennis, Felix Serralles (Fortec Motorsport), Felipe Guimaraes (Double R Racing), Fuoco, Blomqvist, Nicholas Latifi (Prema Powerteam), and Jules Szymkowiak (Van Amersfoort Racing). Jordan King (Carlin), who had started from the back row after missing the crucial part of qualifying, meanwhile, was up to 19th already and pushing hard.

Fuoco, who was now in recovery mode, now began what would become a race long squabble with Guimaraes, passing the Brazilian at Eau Rouge, towing Latifi and Blomqvist with him. The battle 6th was well and truly joined. A lap later and Latifi was all over Guimaraes, which allowed Blomqvist to slip through to claim 7th. While Verstappen continued to lead - albeit by a mere 1.000 second - life was getting very fraught outside the top ten too.

Roy Nissany (kfztiele24 Muecke Motorsport) had a queue building on his rear wing, including King who really wanted to get past as soon as possible. In the middle of it, new boy Santino Ferrucci (Eurointernational), tangled with Antonio Giovinazzi (Jagonya Ayam with Carlin) putting both of them out on the spot and leading to what appeared to be a free and frank exchange of views as the two drivers stood behind the tyre wall and debated blame. That put the retirements at four, as Alexander Toril (ThreeBond with T-Sport) had gone out by now as well, a shame as the youngster had qualified very well.

At the restart there were fifteen minutes or so left. Verstappen controlled the restart well, despite the best efforts of Auer who was trying very hard to snatch the lead from the annoyingly fast rookie. Further back King was on the attack knowing he had the perfect opportunity to get past Nissany. What sorted it out, and let King through, was Latifi just ahead losing out badly and ending up 12th, which unsettled Nissany and let both King and Goddard through.

Although the winner’s identity now looked to be a foregone conclusion, nothing else was as was proved when Fuoco stole 5th from Blomqvist, while Menezes set about Serralles, squeezing through to go 8th. Blomqvist, for one, wasn’t about to take that lying down and immediately launched a counter-attack on Fuoco, quickly claiming the place back. At the back end of the top ten King was now all over Szymkowiak for 9th, while it was all kicking off behind Nissany, the Israeli now building up something of a traffic jam as he and Goddard slugged it out for 13th place. You could have been forgiven for thinking there were points in it, the way the two of them were battling it out. It didn’t help that Bryant-Meisner and van de Laar were also bottled up in the resulting queue and were also keen to get by.

As the race moved towards its conclusion Menezes hacked past Guimaraes for 7th, while for Rosenqvist things suddenly fell apart. Having been 3rd for most of the race he suddenly lost the place to Dennis on what would be the penultimate lap. Rosenqvist took it back, but then slowed dramatically, and saw Blomqvist go past on the final lap, followed by Fuoco and Menezes just to add insult to injury.

Meanwhile Auer closed on Verstappen, making a determined effort to claim the lead that was stopped when Verstappen slammed the door on him, damaging the Mücke car’s front wing in the process. Verstappen would not be denied and he hung on to the flag, keeping the Austrian at bay to win. 3rd was Dennis, from Blomqvist, Fuoco, Menezes, Rosenqvist, Guimaraes, Szymkowiak, and King. Serralles ended the race in 11th, from Goddard, Latifi, Bryant-Meisner, Calderon, Nissany, van de Laar, Gelael, Hurst and Gilbert. Zeller was 21st from Beretta, who was last.

Verstappen set the fastest lap of the race.

Mücke Motorsport on start in Spa-Francorchamps