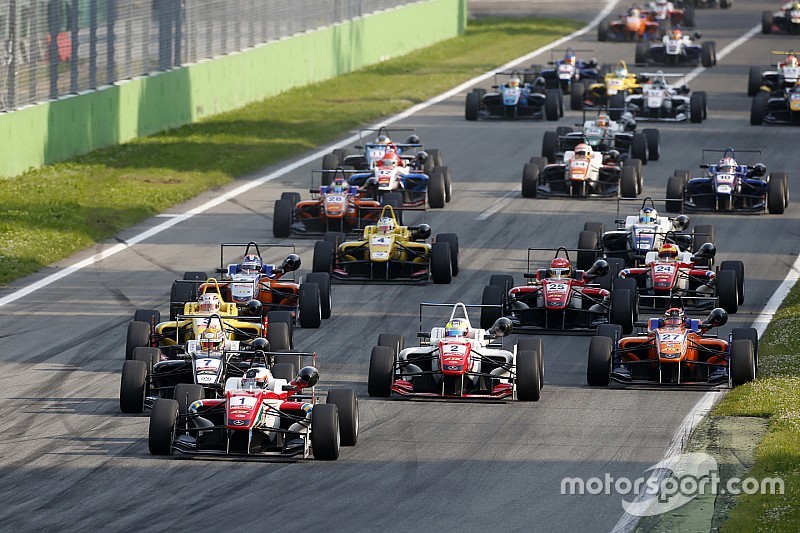 Despite the sheer volume of safety cars and red flags, European Formula 3 enjoyed a milestone year in terms of grid quality. Valentin Khorounzhiy spotlights those who stood out in the ultra-competitive field.

The sheer scope, depth and talent of the 2015 European F3 field is unlikely to be matched by any other junior series any time soon and, perhaps, with good reason.

The championship attracted a big number of highly-rated returning F3 stalwarts, a number of good drivers from the now-defunct national F3 championships and pretty much the entire crop of champions from various entry-level categories - quality of talent was not an issue.

But the sheer NASCAR-esque grid sizes, on the other hand, seemed to present a problem, with a large concentration of talented but inexperienced drivers often bringing out the safety car lap after lap and causing some monster headline-grabbing shunts.

Still, the driving standards headache aside, it was a sublime pack of drivers - so much so that a number of very well-deserved candidates had to miss the top 10.

Among those who did, but still deserve a shout-out are: Motopark's reliable veteran Markus Pommer, who led the German team through a difficult year and even managed to get it a victory at Zandvoort; his teammate Sergio Sette Camara, who managed to deliver two shock podiums despite having no experience in Europe; and Mucke's Santino Ferrucci, who had a mixed campaign but showed progress by getting on the podium at Spa.

Ilott's move to Formula 3 striaght out of karting was, no doubt, an attempt by Red Bull to emulate the mind-boggling success of Max Verstappen's rookie season.  And if the Dutchman is now the yardstick by which the Austrian team measures its juniors, you have to feel for Ilott.

But while there were no wins, it became pretty obvious why Red Bull took on Ilott this early in his career - the Briton is seriously quick.

Scoring a point on his debut after an audacious move on Nicolas Beer, Ilott then finished as high as fifth at Hockenheim, but his campaign early on was blighted by a few mistakes, including a particularly unpleasant move on Mahaveer Raghunathan at Monza. Yet Ilott sorted himself out and became much more confident as the season went on.

His campaign culminated in a legitimate maiden podium at the Nurburgring and, should he stay on in the category for next year, he might just be a serious threat.

As the Mucke F3 driver who had arguably the best 2014, winning the ADAC Formel Masters title, Jensen will probably have been disappointed that he didn't deliver the team's only win - or that he didn't finish highest in the standings.

Still, he made a fine impression in his rookie F3 year, and, if luck was on his side, he would have stood on the top spot. At Monza, he was pushing Felix Rosenqvist for the lead but had to ease off after damaging his nosecone. At Spa, he led twice and was taken out on both occasions.

He didn't do himself any favours by ending Antonio Giovinazzi's title push with a misjudged move at the Nurburgring, but was a reliable pair of hands for the most part and seemed to be easily Mucke's best qualifier.

His apparent ties with Mercedes give hope that he could be retained by Mucke for 2016 and perhaps it's Jensen who could lead the team back to frontrunner status.

The first two years of former karting superstar Albon's single-seater career treated him harshly as he struggled to deliver in Formula Renault, parted ways with the Red Bull Junior Team and saw some well-publicised issues emerge regarding his immediate family.

The other two years have been superb and while his first and only win in cars has so far come in 2014, his rookie campaign in F3 was even stronger.

Leading the Signature team in Lotus colours and dominating a very promising teammate in Dorian Boccolacci, Albon emerged as a phenomenal qualifier and regularly delivered eye-catching results. How he hasn't won a race is really quite hard to explain, given that he started on pole twice and finished runner-up three times.

The Signature car was clearly a quick one, but Albon's luck wasn't great - he sat out several qualifying session and often came to a halt on track through no fault of his own. If not for that, he probably would've ended the year as second-best rookie.

The Gunther v. Jensen title battle was a fitting send-off to the greatly underrated German series ADAC Formel Masters, one in which the latter came out on top. But stepping up to F3, it's Gunther who scored more points - and it's Gunther who won a race.

Just like Jensen, Gunther didn't enjoy terribly consistent form, but he was brilliant when it all came together. That said, it was a miracle that his confidence wasn't irreparably damaged by a stint where he started five races in a row from third on the grid and only claimed a maiden podium from his final attempt.

But the highlight, of course, a brilliant Norisring win from 12th on the grid, the German passing the three victory contenders in one corner.

Having been with Mucke since 2013, he left the Berlin-based team with two rounds to go and lined up with Prema for the Hockenheim finale. In what was clearly the field's best car, Gunther was one of the top drivers and he might just trouble for the title if Prema run him full-time in 2016.

BRDC F4 champion Russell was already a pretty big deal heading into F3, so it was no shock when he rocked up to Silverstone and won in his very first weekend in the series.

What was a lot more surprising is that the young Brit never really troubled for the top spot the rest of the year. He could've added a win at the Nurburgring, but superb performances in the two qualifying sessions were negated by a strict engine change penalty.

After his Silverstone introduction, Russell appeared to struggle quite a bit for qualifying form, although his racecraft was impressive as he finished the first 32 races of the season before being punted off in the very final race.

He's got the whole consistency part down and, if he sorts qualifying and stays on in F3, he'll be a title favorite.

Midway through 2015, you had to feel for Lance Stroll. He was the reigning Italian F4 champion, the reigning Toyota Racing Series champion, and yet those achievements took a back seat to the spectacular crashes he caused at Monza and Spa, the latter earning him a one-race ban.

The punishment was deserved, but it didn't define his campaign, as the Canadian bounced back much stronger. By the time his long-time teammate Brandon Maisano, the only other rookie at Prema, called it quits on F3, the Frenchman had been vastly outscored by Stroll.

And when Prema became dominant in the final rounds, Stroll went from good to great, posting 11 top-five finishes in the final 15 races and eventually scoring a maiden win.

It appears that he will be staying put in F3 next year and, if Prema starts 2016 as strong as it ended 2015 and the Canadian is given the lead driver status, there's a good chance he'll dominate the year.

Racing Steps Foundation protege Jake Dennis was certainly quick enough to fight for the F3 title this year. But bad luck mixed with a number of self-inflicted non-scores meant he was left playing catch-up for most of the year - and catch up he never did.

He ran the show at Pau and would've entered the title fight with hat-trick of wins if his suspension didn't break late in Race 3. He was right on the tail of the main trio after two Spa wins, but then suffered four consecutive non-scores.

He did eventually catch and pass Charles Leclerc in the standings and almost dealt with Antonio Giovinazzi, too, but Prema's late form was certainly a big help - and Rosenqvist was untouchable.

In racking up 16 podiums and finishing third overall, Dennis certainly justified his continued RSF backing. But the British talent programme will probably want to see him back in his 2011-12 title-winning form sooner rather than later.

Giovinazzi's junior career has seen him go from an underrated Italian youngster to a bona fide F3 star as he kicked off his third season with a brutally impressive streak of nine consecutive podiums.

He and Carlin never seemed like the outright quickest combination on any weekend, but they were pretty much always there or thereabouts, allowing him to rack up the results.

A couple of unnecessary incidents throughout the campaign robbed him of points that could have made for a crucial cushion over Rosenqvist during the late Prema surge - and while he was the only driver to take wins away from the Italian team in the last four rounds of the season, second overall was, by that point, the best he could've done.

His impressive campaign meant he was the number one choice to replace the suspended Timo Scheider for the DTM round at Moscow - hopefully he's done enough to be considered for a full season next year.

It's easy to cite the fact that Rosenqvist has been in F3 since 2010 as a criticism, but it does him a disservice - the Swede has been quick in the category from the get go and now, given his first chance with perennial champions Prema, he delivered.

Apart from a couple of weak outings on street circuits, Rosenqvist usually seemed like by far the quickest driver in the field. And while lost points early on - pretty much never of his own doing - meant he had to fight back to the top, an 11-round calendar was always going to be enough for him to catch up.

If this doesn't mean he's done enough to earn a drive in either DTM or GP2, nothing ever will.

Dennis, Giovinazzi and Rosenqvist are all fantastic junior drivers. But Leclerc is a superstar in the making, his sheer potential eclipsing anyone else who raced in F3 alongside him in 2015.

Succeeding his former karting rival Verstappen at VAR, Leclerc opened himself up to comparisons - but he stands up even to the brilliant Dutchman. Where Verstappen was flashy and occasionally dominant, Leclerc was consistent and reliable. The fact he managed eight podiums in his first nine races in a field as strong as this is nothing short of a miracle.

Admittedly, the Leclerc-VAR partnership seemed to lose a few tenths in the second half of the season. But he kept on banking points when he could - and, despite having two inexperienced but quite highly-regarded teammates, only once from 33 occasions was the Monegasque not the top VAR driver on the grid.

He appears ready for GP2, but it seems that GP3 or another year in F3 are his options. And that's a good thing - if he's allowed to develop at a steady pace, Leclerc will make for one hell of a racing driver.

Tatiana Calderon: “It’s been a tough year, but I’m better for it”