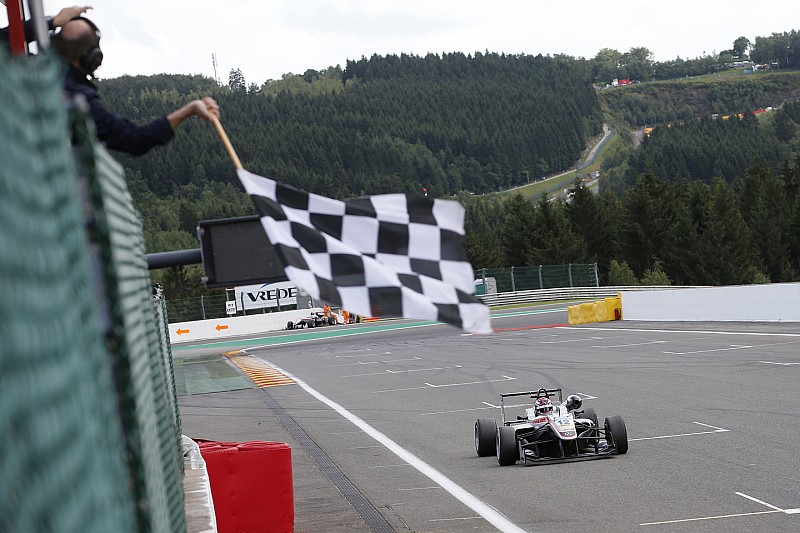 George Russell recovered from an early-race setback to claim a European F3 win at Spa-Francorchamps, while the usually dominant Prema team had a low-key race.

For Hitech driver Russell, it was his second win of the season and his third in the series, yet, despite the Briton starting from pole, his road to victory was anything but straightforward.

While Russell did hold the lead off the line, he could not stay ahead at the Kemmel straight, as the massive tow made it a close seven-car pack heading into Les Combes.

Joel Eriksson was into the lead then, with Force India development driver Nikita Mazepin taking second place - only for the Russian's car to come to a complete halt on exit from Bus Stop.

As such, Russell was back up to second, with Eriksson's advantage now more than two seconds out front.

But the Swede's buffer did not last and, on lap 5, Russell was already all over the Motopark driver, attempting an unsuccessful move round the outside of Les Combes.

The fight on the next lap didn't go that far, Russell easing past Eriksson early on the Kemmsel straight - and, in a couple of laps, the Hitech driver broke the slipstream and disappeared into the distance.

The podium positions were more or less settled from that point on, Eriksson going on to finish 7.4s behind Russell but remaining well ahead of Mucke's Mikkel Jensen, who claimed a long-overdue first podium of 2016.

In what was only the second race of the season without a single Prema entry on the podium, the team's highest-placed driver Maximilian Gunther had made progress early on to move up to fourth.

However, the German was subsequently swallowed up by three Van Amersfoort Racing drivers, Anthoine Hubert, Callum Ilott and Pedro Piquet locking out P4-P6, with the Brazilian recording his best finish in European F3 so far.

Gunther had to do with seventh and ended up the only Prema driver in the top 10, with championship leader Lance Stroll ruled out with a puncture early on, Nick Cassidy suffering a costly trip through the gravel and Ralf Aron ending up no higher than 14th.

While Guan Yu Zhou and Ryan Tveter settled into eighth and ninth, Niko Kari had a fight on his hands to keep the final points-paying finish.

The Finn successfully withstood under pressure from Ben Barnicoat, who was set to start fifth but stalled on the formation lap and had to fight through from the pitlane.