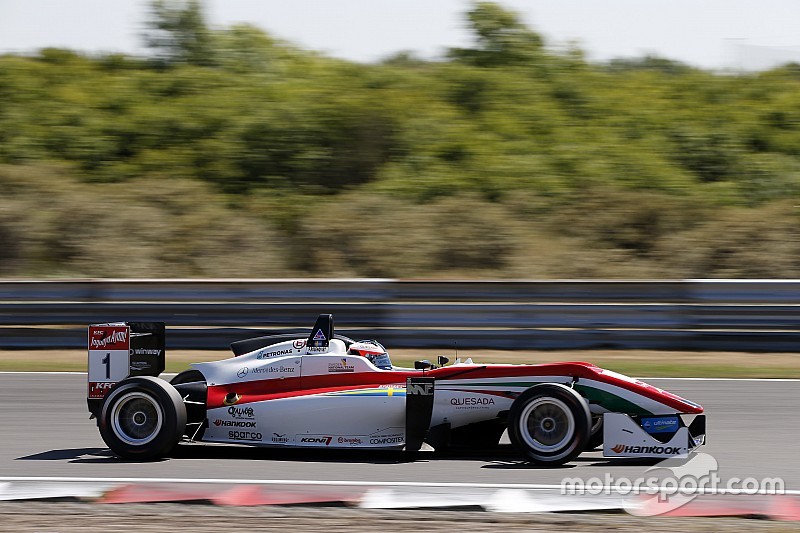 European F3 title contender Felix Rosenqvist converted pole position into his sixth win in F3 racing leading every lap of the second race of the weekend from start to finish.

A sublime getaway from Rosenqvist looked set to hand the Swede a handy advantage after the opening lap, with fellow front row starter Antonio Giovinazzi focussed more on keeping Jake Dennis at bay at the start.

However, the advantage Rosenqvist gained due at the start was for naught because of an incident further down the pack bringing out the safety car for the first time in the race.

Having featured in a few incidents in the preceding rounds, Lance Stroll was again part of the carnage. Markus Pommer moved across the Canadian heading into Turn One and Stroll himself mirrored his move, dashing to the right.

That space was already occupied by Charles Leclerc and a collision followed, leaving Stroll's suspension in ruins while the championship leader continued without any damage.

The green flag was out shortly thereafter and Giovinazzi managed a solid restart, getting close enough to have a look on the inside of Rosenqvist.

But he got no closer to that and, over the next lap, Rosenqvist pulled out a whole second on his Italian rival.

Zandvoort then claimed another of F3's 34-car field as Leclerc careened through the gravel trap into the barriers bringing out the safety car for the second time.

After a lengthy clean-up, the next restart mirrored the one before, with Giovinazzi offering a look round the outside of Turn One but, again, to no avail.

Subsequently, two rapid laps from Rosenqvist allowed him to stretch his advantage to two seconds and, with no further interruptions to the racing, that would prove sufficient to ensure a win for the Swede.

Giovinazzi finished second to get within ten points of Leclerc in the standings while Dennis rebounded from a four-race pointless streak to take third.

The rest of the top ten was also locked out by newcomers, with Sergio Sette Camara heading Maximilian Gunther, Santino Ferrucci and first-time point-scorer Ryan Tveter.