In less than a week’s time the series reconvenes in Pau, in South Western France where they will race round the streets of the historic Parc Beaumont.

So now the dust has settled at Hockenheim after this weekend’s three races in the 2014 FIA F3 European Championship, what do we know that we didn’t before? Well, we know that Prema Powerteam is still the force to be reckoned with in the category, but there are now also a couple of new (old) kids on the block in the shape of Carlin and Van Amersfoort Racing and Mücke Motorsport cannot be written off yet. Both Carlin and Van Amersfoort have tasted success in the past (and for that matter in the present given Carlin’s domination of the British series over the past decade) but Prema have pretty much steamrollered their way through the European F3 category of late, leaving their rivals breathlessly trying to keep up.

However, with the arrival of Max Verstappen at Van Amersfoort Racing has seen a resurgence of the Dutch team, proof that they have not lost the ability to prepare a rapid car, despite the way things looked last season. They just needed a driver with the capacity to make the best of the equipment he is given, and in the precociously talented Dutch teenager they seem to now have just that. A DNF in the first race, and a gear selection problem that put him out of race 2 before it even started, were tough on the youngster, but he didn’t let it get to him and his drive to victory in the 3rd race of the weekend was mightily impressive. 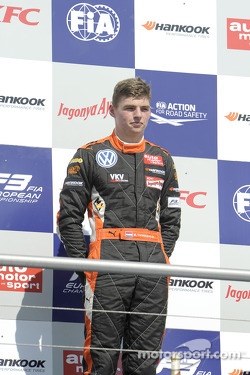 As for Carlin, it was always just a matter of time before they became strong challengers in the series. That time is now here judging by Tom Blomqvist, Ed Jones and Antonio Giovinazzi’s performances. Blomqvist, in one of the three Jagonya Ayam with Carlin car, looked particularly impressive in qualifying but then fell foul of what seems to be an extremely harsh rule. Given the relatively temperamental nature of the VW engines, and the fact that this is a development year for the formula, imposing a rule that means an engine change earns a driver three – not one, please note, but three – ten grid place penalties in succession is harsh. Blomqvist was top of the times for Races 2 and 3 but would start from 11th, handing both poles to Verstappen. He started the first race from 6th which was a respectable enough result. A hard charge in Race 2 netted him 5th, he was 4th in Race 1 and failed to finish Race 3. It made you wonder what he might have done without the penalty.

Antonio Giovinazzi and Ed Jones further showed the strength of Carlin now, with the Italian claiming a 2nd and a 5th, and Jones taking the final slot on the podium for the first two races. In addition, Jordan King and Jake Dennis both scored points in all three races with a 3rd, a 9th and a 7th for King and a 7th, a 10th and 6th for Dennis, which must make any driver who can’t get into Prema next year think very carefully about where to take their bags of money. Graeme Chilton’s baby must look like quite an attractive option. 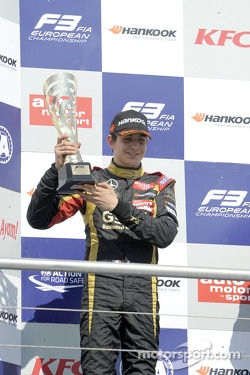 Certainly Mücke Motorsport still don’t appear to be on full song, with a win for Lucas Auer and two 4th places suggesting that something might be starting to work, but poor Felix Rosenqvist having what for him amounted to another terrible weekend where the man who many expected to win this year’s title managed a 5th, a 7th and DNF, after also spending the weekend at Silverstone in the doldrums just unable to extract the necessary power from their customer Mercedes engines.

At so to Prema. Granted they still lead the title charge, with Esteban Ocon now 36 points ahead after just two race weekends. However, Ocon could only manage 9th in Friday’s race, though he made up for it with a win and a 2nd place in the other two races. Antonio Fuoco, the much-touted teenager with backing from the Ferrari Academy may have the biggest fan club in the paddock, but he remains 2nd in the points table after a tough weekend that saw him finish Race 1 just outside the points, not finish Race 2 at all and only get onto the podium for the final race of the weekend where he finished 3rd. He was fortunate that Blomqvist was penalised over the engine issue because otherwise it seems likely that Blomqvist would have pulled ahead otherwise. With the other two Prema drivers only able to manage a solitary 6th place between them (Nicholas Latifi was able to salvage something after two DNFs and Dennis van de Laar finishing all three races but scoring no points at all) it seems the playing field is far more level than it has been in several seasons.

In less than a week’s time the series reconvenes in Pau, in South Western France where they will race round the streets of the historic Parc Beaumont. The challenge of a street race, especially one as demanding as this, should sort the grown-ups from the children, and will certainly show who has nerve and talent, as well as a an essential smattering of luck.