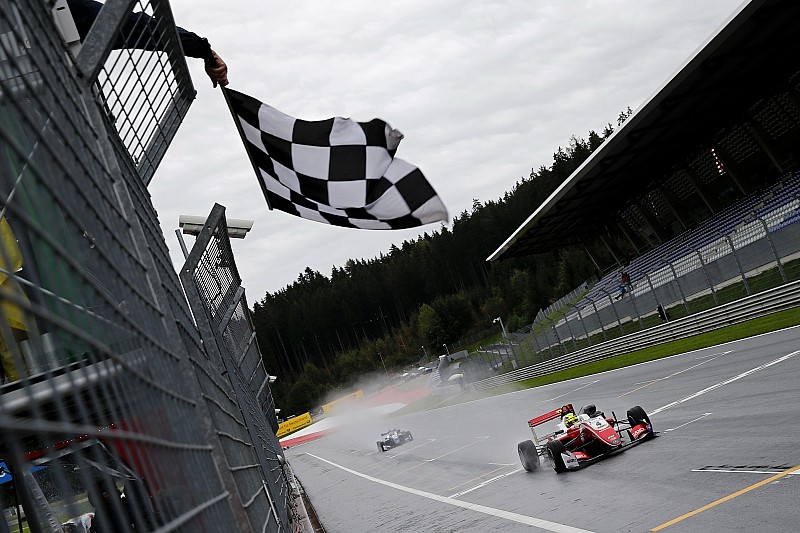 From pole position, Schumacher had to defend from faster-starting Prema Powerteam stablemate Robert Shwartzman into Turn 1, and the Russian Ferrari protege put Schumacher under immense pressure over the opening lap.

On the second lap, Schumacher got his eye in and completed it 1.012 seconds to the good, and the gap hovered around that mark for the first half of the race.

Shwartzman, knowing the track was drying, then took it easy for a spell to conserve his rear tyres, but when he pushed again he couldn’t do any more than erode the gap slightly, Schumacher winning by 0.903s.

“I managed to get maybe not the best start, and I had to defend quite hard to keep the position,” said Schumacher.

“In the race I had to try a few things and see where the limit is, but in the end it worked out quite well.

“I had a good fight with Robert for the first few laps, and managed to pull a gap, then I managed it, although I felt the rear tyres were going away as it was drying out.”

The podium was completed by Alex Palou, who put in a fantastic drive from 13th on the grid in his Hitech GP car.

Palou was up to sixth within a lap, then pulled off a great move on Juri Vips at the final turn on lap three to take fifth.

Ferdinand Habsburg had made a similarly superb start from 11th on the grid, the Carlin driver passing Marcus Armstrong for third on lap three.

But he was warned by stewards that his move on Vips on the opening lap, which began when he ran wide at Turn 3, was illegal and that he would be forced to take a drive-through penalty if he did not give the place back to the Estonian.

Vips was also behind Armstrong and Palou by this stage, so when a furious Habsburg complied – he said he had backed off and allowed Vips back ahead, before outbraking him at Turn 4 – he slipped all the way back to sixth.

Palou was now attacking Armstrong for third, and finally made it through with an outside pass at the Turn 6 left-hander just before half-distance.

But the Catalan was five seconds behind the dominant Prema duo at the front, and could not make any inroads.

A recovering Habsburg found his way back past Motopark man Vips and Armstrong’s Prema car, but he could not pull away and, as his rear tyres went off, he found himself under pressure once again.

Armstrong moved back ahead of Habsburg for fourth on the 20th lap of 22 with an outside pass at Turn 4, while Habsburg only just beat warring Motopark men Vips and Jonathan Aberdein, who swapped places in the final turns of the last lap.

Pre-race points leader Dan Ticktum dropped back to 10th on the opening lap, but won a fantastic fight with Jehan Daruvala for eighth before closing on his Motopark teammates towards the finish.