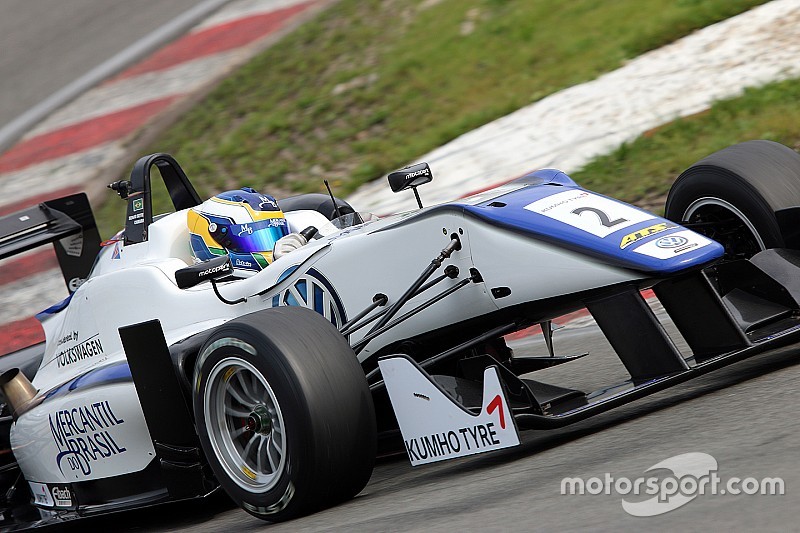 Recently announced Red Bull driver Sergio Sette Camara says it only took two weeks for the energy drink company to sign him for its Junior Team.

The Brazilian raced with Motopark in the European Formula 3 series in 2015, finishing 15th overall, and will continue with the same team for 2016 as a Red Bull junior.

"In November, they called us before the Macau race through my team manager," he said.

"He told me: 'Dr. Helmut Marko asked me your phone number and he can call you anytime'. They called me 10 minutes after this dialogue.

"We arranged to meet in Austria the next day. The conversation was very positive. They asked me about my career, about my weight, height, etc.

"We left Austria optimistic that we could sign the contract after the Macau race, and that's what happened. It was all very fast, this process happened in two weeks.

"Every young driver wants to get into a F1 team programme. You know that if you get the results, the opportunities will appear.

"Marko says that the drivers in the Red Bull academy will have to fight for the championship," the 17-year-old added.

Being associated with a successful F1 team brings a tremendous amount of pressure but Sette Camara insists this is normal for any young driver.

"Any driver is under pressure from when he is young," he said. "When you are a go-kart racer, the family makes a great effort, so there is pressure to get results.

"Red Bull were very clear, just as they were quick with my contract - they can say goodbye too, I understand that. I believe this pressure will not affect my performance."

Sette Camara also added that Marko wanted him to move near Red Bull's factory in Milton Keynes, but was able to convince the Austrian to allow him to continue to live in Barcelona.

"Dr. Marko said I would have to live near the team HQ to facilitate training. But before this, I explained to him where I live and why I was there," he said.

"So the fact that he already knew the place, I will not have to leave Spain.

"He knows and trusts in that place, as Red Bull also invests in bike riders and they are also in CAR [Centre D’Alt Rendiment, in Barcelona]. My routine will not change much."