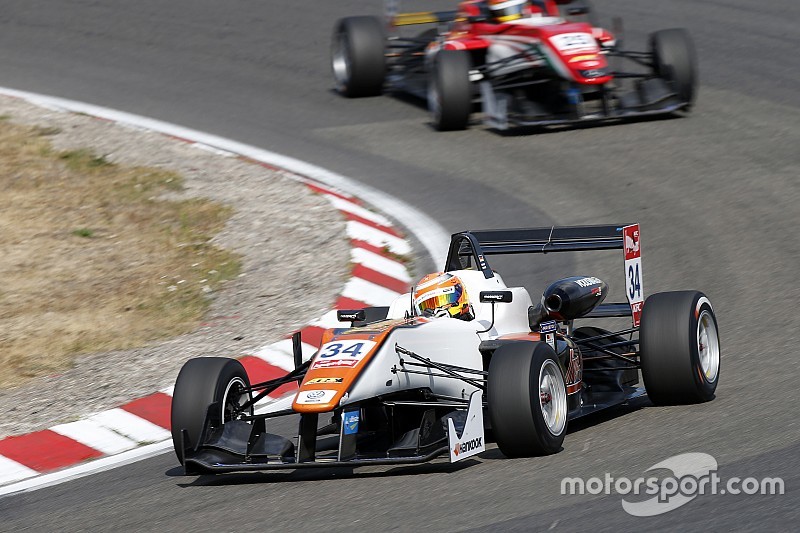 A day after picking up his first podium, Motopark's Markus Pommer did one better by claiming his first victory in European F3.

Having secured the win in race one this weekend by quickly chopping across Felix Rosenqvist at the start, poleman Antonio Giovinazzi tried to do the same with Pommer this time around, but the German was too quick off the line and managed to get the inside into turn one.

Pommer then became the first Motopark driver to lead a lap in European F3 this season and maintained his advantage over Giovinazzi at around half a second when the safety car took to the track for an off by Matt Solomon.

The following restart saw Pommer hold first, but in very little time the race was neutralised again, this time for Mikkel Jensen, whose Mucke car sustained serious damage to the right-side suspension.

Those watching the race were soon hit with a major case of deja vu when, following another short period of green-flag running, the safety car made its third appearance.

It was triggered when Nicolas Pohler ran wide and allowed Gustavo Menezes to get side-by-side with him, leading to contact between the duo, with Pohler briefly going airborne and Menezes nearly tipping over in the gravel.

After that particular wreck was cleaned up, the race got going again with five minutes to go – and Pommer managed another smooth restart.

It proved sufficient to ensure the reigning German F3 champion's first win in the European series while title contenders Giovinazzi and Rosenqvist settled for completing the podium.

However, that point was not enough to keep the Monegasque in the championship lead, with Giovinazzi's runner-up finish promoting him to first place in the standings.

When Irvine showed he was more than Schumacher’s subordinate