At Silverstone this evening the FIA F3 European Championship rookies were very much to the fore, as Esteban Ocon (Prema Powerteam) claimed pole position for Rounds 2 and 3 after holding off his more experienced team-mate Nicholas Latifi, and Tom Blomqvist (Carlin) for Round 2, and Antonio Fuoco (Prema Powerteam) and Blomqvist in Round 3.

The latter part of the session proved quite fraught, with changes of position all round, but the initial stages were very quiet indeed. The lights went green to let the cars out and no one moved. For long minutes it was as if they were all waiting for someone to blink, no driver too keen to be the one to have to clean the track for his fellows.

Eventually, after a longish wait, John Bryant-Meisner (Fortec Motorsports) finally sidled out to set a time. With each drivers’ fastest lap determining their place on the grid for Round 2, and the second fastest time counting towards the grid for Round 3, there was very little time to spare. You might not have thought it, though, given that a quarter of the session had elapsed, and no one had done more than an out lap. At least now seven of them were about to start their first flying laps, although it meant there were still 19 drivers not at that stage of readiness yet. 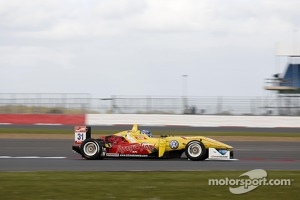 Finally, with the time ticking rapidly down and twelve minutes left to run, Felix Rosenqvist (kfzteile24 Mücke Motorsport) finally got out, presumably after Mücke realized there was nothing more they could do to sort out his engine issues in the time available. It was still all pretty meaningless at present though, as Bryant-Meisner continued to lead from Guimaraes.

The track finally starts to fill up and that was when it all started to change. The effects were relatively low level initially as Dennis van de Laar (Prema Powerteam) went 10th, but was then jumped by Fuoco. Meanwhile Rosenqvist hauled himself up to 19th and Max Verstappen (van Amersfoort Racing) was 21st. It was unlikely that they would stay there of course, but it really wasn’t looking good for last year’s runner up at this stage.

Bryant-Meisner continued to push on, as did Guimaraes, though he stayed second. However, it wasn’t long before Lucas Auer (kfzteile24 Mücke Motorsport) elbowed his way past the Brazilian for 2nd. Keeping things moving forward, Felix Serralles (Team West-TecF3) also leapfrogged up the order to go 4th.

Shortly afterwards, Verstappen also made his move, going fastest of all, though he was quickly outpaced by Fuoco, who in turn was replaced by Ocon, the Lotus Junior driver setting a blistering pace. Latifi moved up to 4th while van de Laar claimed 5th only to lose out to Rosenqvist almost immediately afterwards.

The next major improver was Blomqvist, the Carlin driver going 3rd while Serralles hit 5th only to see Auer take it from him. However, that seemed to inspire the other Carlin drivers because Antonio Giovinazzi started really motoring now, claiming 5th and seemingly more comfortable in the car than he had been in the earlier session. Jordan King (Carlin) was also finally showing pace, having been the last of their drivers to emerge.

Blomqvist wasn’t done yet either, climbing back to 2nd, while Serralles had now fallen back to 22nd, despite getting faster himself. Latifi pushed hard to shove Blomqvist down to 3rd, while van de Laar was looking better than he ever did last year for 6th. Tatiana Calderon (Jo Zeller Racing) improved for 22nd, while Serralles reappeared in 11th. With four minutes to run they now seemed to be holding station, with Ocon ahead of Latifi, Fuoco, Blomqvist, Verstappen, King, van de Laar, Giovinazzi, Auer, Edward Jones (Carlin) and Rosenqvist.

As Hector Hurst (Team West-TecF3) became the first person warned over driving standards, the pace of change steadied and it seemed everyone was holding station. Even so Ocon managed to set a faster time to ensure both pole positions were his, and Blomqvist also found some more speed – again it didn’t change his overall position but did mean he had two third places to add to his pole from earlier when the flag finally fell. The only other movement came from Gilbert, who moved to 11th, and a lap later he was 10th, Bryant-Meisner snatching 11th as the flag fell.

Rookie Ocon claims a pair of pole positions at Silverstone