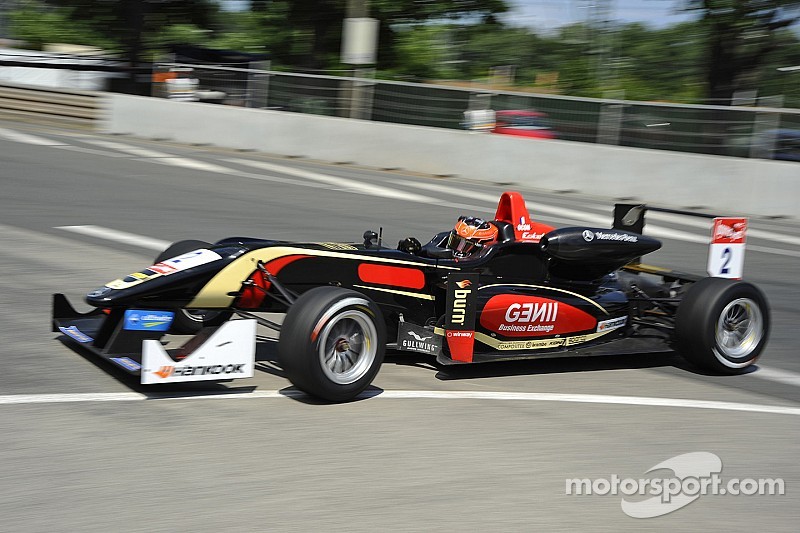 On their first visit to the Moscow Raceway track, Esteban Ocon (Prema Powerteam) wasted no time at all in setting about regaining his position at the top of the FIA European F3 tree, with a pole position time that no one else could get even close to, no matter how hard they tried. He was chased to the line by Jordan King (Carlin), but even he couldn't get within half a second of the championship leader. 3rd went to Tom Blomqvist (Carlin), while Max Verstappen (Van Amersfoort Racing) qualified 4th, a week after winning the Zandvoort Masters.

The field was somewhat reduced for this meeting, Double R Racing (Felipe Guimaraes), T-Sport (Alexander Toril and Richard “Spike” Goddard) and Fortec Motorsport (John Bryant-Meisner and Mitch Gilbert) all for various reasons choosing not to make the expensive long distance trip from the UK, and Sandro Zeller also giving it a miss.

However, although only 20 cars were present, the front runners had all made the trek to the wilds of Russia, so there was no reason to assume that Ocon would have it all his own way. He didn't look that interested early on, in fact. For that matter, nor did anyone else, the first car only turning a wheel with only 17 minutes left to run. That man was Verstappen, and his appearance seemed to open the floodgates. Within seconds 18 of the field were out there, with only Ocon and Blomqvist playing coy and lurking in the pits.

Eventually even they came out to play just around the time Verstappen set off on what would be his first times lap. With the morning's free practice sessions producing times in the 1:26 bracket, the fact that the initial fastest lap went to Antonio Giovinazzi (Jagonya Ayam with Carlin) in a 1:37 suggested there was a lot more to come before the session was done. The fact that Michele Beretta (Eurointernational) was 2nd at this point reinforced that theory. Jake Dennis (Carlin) and King were respectively 3rd and 4th.

The next improvement came from Jules Szymkowiak (Van Amersfoort Racing), who was briefly at the top of the timing screens, so briefly you might have missed it, before Dennis van der Laar (Prema Powerteam) went even faster. Giovinazzi was back seconds later to reclaim provisional pole in a time of 1:29.212, with Felix Serralles (Team West-TecF3) in 2nd. Serralles was rapidly displaced by Roy Nissany (kfzteile24 Mücke Motorsport), only to be in turned pushed down the order by Gustavo Menezes (Van Amersfoort Racing), before Serralles got his own back. Tatiana Calderon (Jo Zeller Racing) was also among the early front runners, settling in in 5th place for a time.

Things eventually started to settle when Dennis topped the times in a 1:28, and then King went faster, moving the target forward a second. And then Ocon put in the first of a series of blindingly fast laps, this one a 1:27.023. King responded by going quicker but stayed 0.5 seconds behind the French youngster. Another lap, another provisional pole time from Ocon, with a 1:26.887, while behind him Carlin drivers fought it out for 2nd. Blomqvist slotted in to 3rd, lost the place to Dennis, then took it back again, while King desperately tried to get back on terms with Ocon to little avail.

It was beginning to look as if no one apart from Ocon would actually get below 1:27.000. Certainly Dennis and Blomqvist were too busy fighting it out for 3rd even as the session wound down, while Verstappen’s best effort moved him to 4th, just ahead of Lucas Auer (kfzteile24 Mücke Motorsport). King found some more time from somewhere but Ocon went faster yet, opening the gap to King to a crushing 0.619, before pulling into the pits having decided he’d now done enough.

Even in the final few minutes improvements were still happening further back in the pack, but no one was getting ahead of Ocon. No one was even in the same postcode it seemed. And so, after several people had times disallowed for not respecting track limits, at the end of a session where traffic seemed to be an issue despite the field being much smaller than usual, Ocon was undisputed pole sitter, and had done considerably less distance than the others, thus saving rubber for when he’s really going to need it in tomorrow’s race.

Ocon back on top in Moscow