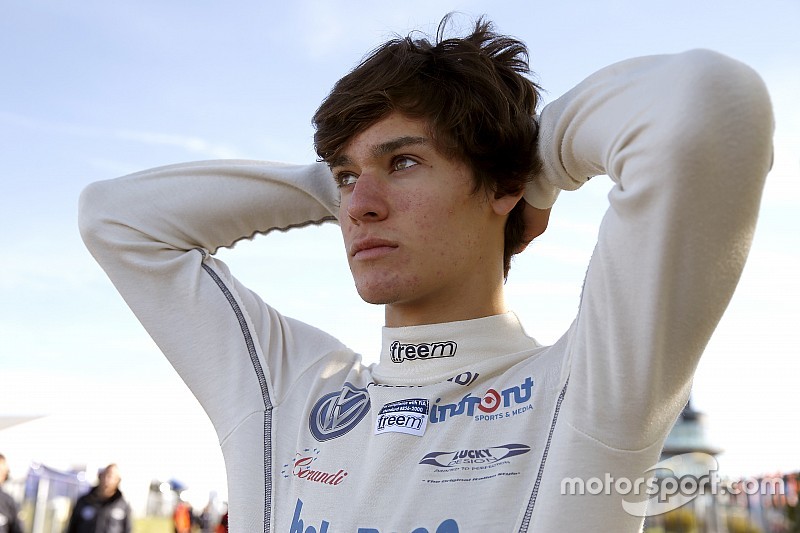 In an exclusive Motorsport.com interview, Alessio Lorandi looks back on his 2015 European Formula 3 campaign, and looks ahead to the new season with his new Carlin team.

The 16-year-old Italian had a tough learning season with Van Amersfoort Racing in his first year in single-seater racing, finishing 20th in the drivers' standings.

Prior to the F3 jump, the Italian had a fruitful karting career, sealing the title in the 2013 KFJ Karting Championship and finishing runner-up in the WSK Master Series the following year.

After a rookie F3 season with VAR, Lorandi decided to switch to Carlin, where he hopes to enjoy similar success to fellow countryman Antonio Giovinazzi - who came runner-up with the British squad in 2015.

What was your reason for switching from Van Amersfoort to Carlin?

That’s not an easy question to answer, for me personally I felt like I needed a change. Carlin is a very good team that feature cars in several categories and they have always been competitive, finishing second behind Prema for the past few seasons.

Coupled with the fact that I feel extremely comfortable with the team, this made the decision slightly easier.

Was Carlin the only option for you?

No, I tested with Motopark, Prema as well as Van Amersfoort, but I felt most comfortable with Carlin and hence have decided to sign with them.

How is it working with Carlin and do you think you can win with them?

Well, I’ve done some winter testing with them and as I have said I am very comfortable with them. They are very professional and they know how to do their job very well. The possibilities for this year look quite good, obviously, we can’t judge based on winter testing and we will have to wait for the first official test. I think it’s best if I let my results do the talking.

Tell us about the intra-team rivalry with Charles Leclerc last year at VAR...

It was a lot of hard work and towards the end, I was able to close the gap [to Leclerc] a lot especially in Nurburgring, Hockenheim, and Macau. I do believe that if I did not have a teammate as quick as him I would not have learned as much as I have.

Moving on, what were some of the issues you faced moving directly from karts?

Based on winter testing I didn’t think it would be too big a step, as I was quite quick. Obviously, it was a difficult year in learning both the tracks and the car itself, but I’m also confident that if I had raced a lower category my results would have been better, then again I learned a lot and feel much more confident going into this year.

Do you think the move to F3 was too early?

No, as I have mentioned this past year was a learning year for me and I gained valuable experience and exposure both to the tracks and the car. I definitely feel more confident going into the coming year.

How has your preparation been during this off-season? Is there anything that you are doing different from last year?

I’m training like crazy! It’s been very intensive and I’m putting in everything. I’m training in all the zones that the drivers need to train in.

Obviously after doing a season in cars you get a better idea of what you need to do specifically, I wouldn’t say I am training harder this year but I’m definitely training better in terms of specific aspects.

Finally, how do you strike a balance between being in school and racing?

It’s not too easy but at the same time, I prioritise my racing, which has been the case right from karting. School doesn’t really get in the way of my training and for me personally I don’t mind sacrificing a bit of study time to train!