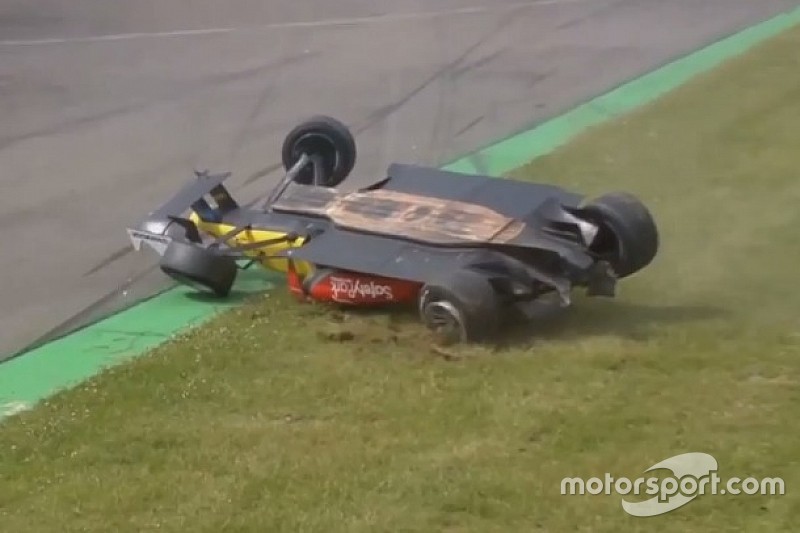 A terrifying airborne crash for Gustavo Menezes brought a premature halt to the second European Formula 3 race of the weekend at Spa, won by Jake Dennis.

After a restrained first race which passed largely without incident, driving standards once again took a nosedive in a second race punctuated by three safety car periods, the last of which ended the contest early following Menezes' enormous crash.

The first caution came early on as Kang Ling clumsily hit Julio Moreno in a passing attempt at the Bus Stop chicane, a blameless Tatiana Calderon also getting caught up, with Ferrari protégé Lance Stroll leading the way having passed polesitter Mikkel Jensen.

When the race got back underway, Stroll was under pressure from Jensen and Felix Rosenqvist, up to third from fifth on the grid ahead of Dennis and Brandon Maisano.

The trio arrived at Les Combes together, Stroll defending his position by moving to the inside – only to then cause a three-way melee by recklessly moving across on the attacking Jensen in the braking zone, the Dane consequently hitting Rosenqvist, who was looking to the outside of the pair.

That eliminated all three of the frontrunners on the spot and brought out the safety car once more, leaving Dennis as the race leader ahead of Santino Ferrucci and Maisano.

Sergio Sette Camara was able to find his way past Maisano after the restart, and the Prema driver soon had Menezes on his tail in the battle for fourth.

Coming along the Kemmel Straight, Menezes had an enormous tow from Maisano, sweeping to the right and simply running out of road before hitting the back of the Frenchman’s car and launching into the air into a spectacular half-flip.

Menezes’ car came to rest upside down at Les Combes corner, fortunately not hitting any other cars in the process, the American miraculously emerging from his battered Carlin machine unharmed once the car had been righted – and dropped on the ground – by the marshals.

The race ended behind the safety car that followed, with Dennis taking a third victory of the season from Ferrucci and Camara, both of whom took their first podium finishes of the season.

Maisano survived the impact with Menezes to take fourth ahead of Dorian Boccolacci and race one winner Charles Leclerc, with Maximilian Gunther a distant seventh ahead ahead of Raoul Hyman, erstwhile points leader Antonio Giovinazzi and Alessio Lorandi.