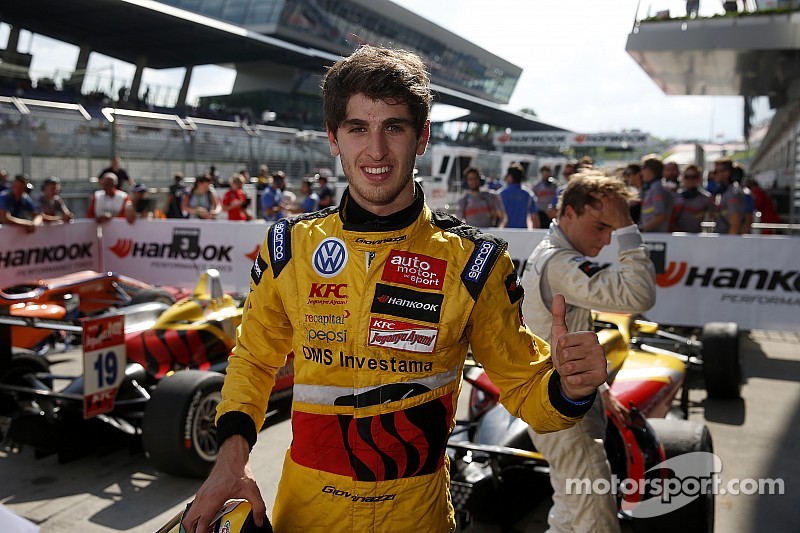 The championship leader Esteban Ocon rounded off a thoroughly miserable weekend in which he scored no points.

The FIA F3 European Championship weekend at the RedBull Ring came to an end with yet another fraught race that saw Antonio Giovinazzi (Jagonya Ayam with Carlin) finally claim victory from Tom Blomqvist (Jagonya Ayam with Carlin) and Lucas Auer (kfzteile24 Mücke Motorsport), while championship leader Esteban Ocon rounded off a thoroughly miserable weekend in which he scored no points at all with a drive through penalty for not respecting yellow flags.

Even at the start things were messy, with the two Fortec Motorsport cars of Alfonso Celis and John Bryant-Meisner not getting beyond lap 1 after an embarrassing clash at the back of the pack. Meanwhile, at the front Giovinazzi didn’t hesitate, out-dragging Blomqvist off the line to lead the race from the get go. Blomqvist was considerably less tardy this time, though, and was all over the Italian during most of that frantic first lap. Basically Tom really wanted that lead position, and Antonio wasn’t about to let him have it.

Meanwhile, further back it was getting interesting. Auer had got the drop on Antonio Fuoco (Prema Powerteam) into Turn 1, and a corner later Verstappen tried to go through on the Italian as well. Fuoco resisted, Verstappen ran out of road, and ended up back in 8th. Ocon was now up to 12th, just behind Felix Rosenqvist (kfzteile24 Mücke Motorsport), the driver he shoved off in this morning’s race, thus earning the penalty that meant he was now on the tail of his victim. What could possibly go wrong?

Actually, what when wrong was that Rosenqvist skittered off into the boonies, spinning out of the race, and was joined by Alexander Toril (ThreeBond with T-Sport), the Spaniard losing out in a wheel to wheel battle with Jules Szymkowiak (Van Amersfoort Racing). Cue instant Safety Car, yet again, just as the battle for 5th was starting to hot up, with Nicholas Latifi (Prema Powerteam), Jake Dennis (Carlin), Jordan King (Carlin) and Max Verstappen (Van Amersfoort Racing) all locked in contention.

At the restart Giovinazzi looked as if was cutting it pretty fine in terms of keeping pace with the Safety Car, but he controlled it well and no warning messages flashed up. It looked like he might just do this. Behind him Dennis ran wide in turn 2 after he tried to pass Latifi, which enabled King to take a look at passing him. That led to King being forced wide in his turn, which let Verstappen through. Shortly after Latifi got very sideways in the final corner and Dennis was through. Latifi’s attempt to take the place back went awry, and Verstappen was through on him.

This was all highly entertaining stuff, and promised to become even more so when Ocon passed Calderon to join on the back of the battle for 5th. His first target was King. It got even better when it seemed Calderon was also going to join in. However, something happened because she was suddenly down in 12th, and was part of a second scuffle that continued all the way to the flag as well, as she, Szymkowiak, Nissany and Gelael all tried to find a way past Menezes.

Elsewhere, Serralles pulled off with what seemed to be suspension damage, which may well have been part of what happened. It seemed impolitic to ask. Even further back there was an interesting twist on wheel to wheel racing, when Hurst and Beretta locked wheels and could do nothing but skitter off into the gravel, knitted together. Hurst eventually managed to disentangle himself and drove back on to the track scattering vast amounts of gravel all over the track. It was definitely novel, and not necessarily in a good way!

However, as Giovinazzi powered away from Blomqvist at the front, all eyes were on the battle for 5th. Verstappen was now the man on top, having passed Dennis, while Ocon passed King into Turn 1 to claim 8th, only to promptly get a drive-through penalty for not respecting yellow flags. That has put the cat among the pigeons and would almost certainly mean the youngster would finish out of the points, thus leaving Austria without scoring a single point from three races. He may not have fond memories of this place in years to come… he was 16th at the end of his out lap and probably very cross about it.

At least he could console himself with the thought that he wasn’t alone in his offence. Next to be called in was Szymkowiak, to be followed by van de Laar, Ferrucci, Goddard and Zeller. Quite what they had done that no one else had done was hard to judge but the officials quite reasonably take offences that may endanger marshals or other drivers seriously. Not unsurprisingly this changed the shape of the race, although the fight for places in the top ten was still ongoing, Verstappen now turning his attentions to Fuoco in 4th.

And that would eventually change things even more. The Dutch driver charged down the inside of Fuoco into Turn 1 but promptly ran out of road, and clipped the Italian’s front wing into the bargain. A lap later and Verstappen was through, but then the black and orange flag signaling that there is a fault with the car and you must pit was shown to Fuoco. To be fair, he’d probably got the idea already as he plummeted down the order and pulled into the pits for new nose. Meanwhile, Verstappen was awarded a drive through for overtaking outside the track limits for the second time this weekend.

With so little of the race left now the Dutch driver didn’t come in, so was instead hit with a 20 second penalty which dropped him out of the points to 12th. That moved Latifi to 4th, ahead of Dennis who he had caught as they tried not trip over Verstappen and Fuoco.

Fastest lap this time out went to Giovinazzi.